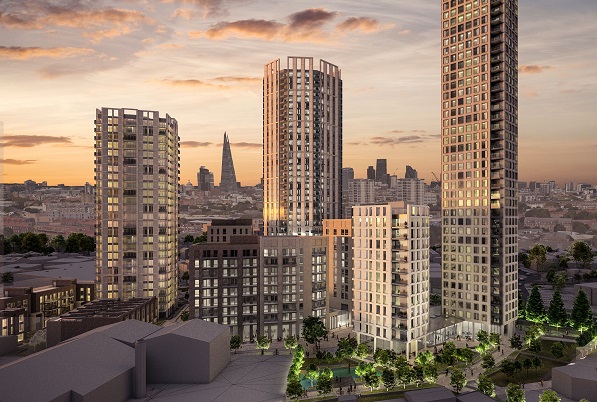 KALMARs, the leading South and East London estate agents, have published an authoritative new research report entitled The Transformation of Old Kent Road, which provides a detailed review of how Old Kent Road and surrounding area is undergoing a £10.7bn regeneration. The report reveals that tired low-rise retail warehouses and factories are being replaced by high quality, exciting new apartment buildings and mixed-use developments, providing circa 20,000 new homes, 8,000 in the first phase, and workspace for 10,000 new jobs, creating a new town centre and dynamic urban quarter for London. Combining annotated maps, photos/CGI images and insightful commentary, the new KALMARs report says that there are four key factors driving the transformation of Old Kent Road. The first is its designation as an Opportunity Area by the local authority and the GLA, and its ambitious new Action Plan; the second is that Old Kent Road is the forgotten part of central London given its close proximity to the City and West End; the third is the location’s exceptional growth potential, with extensive areas appropriate for redevelopment and relatively low current property prices (average c£725 per sqft for new build residential) compared to most other areas equidistant to Central London such as Clapham, Islington and Pimlico; and the fourth is the proposed Bakerloo Line extension between Elephant and Castle and Lewisham, with two new stations on Old Kent Road. The KALMARs report reveals that on, or adjacent to, Old Kent Road, between the Bricklayers Arms roundabout and IIderton Road, there already are 43 new residential or mixed use developments in the public domain. These are either recently built, under development, granted planning consent or in the pipeline and provide circa 8,000 new homes. Using images and data, the report reviews 32 of these new developments for which there is detailed information. These new projects will provide 7,886 new homes, along with 882,190 sqft of commercial/employment space and 48,032 sqft of local community facilities. These projects have an estimated Gross Development Value of £10.7bn, based on the Homes and Community Agency densities and current property values.

Of the pipeline developments, nine are located directly on Old Kent Road and six on adjacent IIderton Road, with a further concentration of 10 developments adjacent to Burgess Park, all located between Sumner Road and Peckham Park Road. KALMARs reveal that in terms of height the new Old Kent Road area developments range from just four storeys up to 48 storeys in height, with the average scheme being 19 storeys in height. These figures underline the huge transformation taking place along the thoroughfare with low-rise warehouses being replaced by “contemporary international quality” medium to high-rise residential or mixed-use towers. This requires a bold approach to break through traditional preconceptions of the area’s limitations and realise the true potential. KALMARs say that there are three distinct zones of development in the pipeline or being planned along Old Kent Road. The first are niche residential schemes of less than nine homes/apartments, typically 4-6 storeys in height with contemporary glass and brick facades. The second are medium sized schemes providing between 20-130 homes/apartments, which are typically 6-15 storeys in height, some with commercial facilities. Finally there are hugely exciting, large urban regeneration projects, providing between 180 to 1,300 homes/apartments, which are up to 48 storeys high, complete with new retail, commercial and community/leisure facilities. These are being undertaken by leading urban regeneration experts, including Berkeley Homes, Galliard Homes  and L&Q, who have a strong track record of identifying potential others have missed and delivering appropriate high quality developments. KALMARs highlight that there are also numerous boutique developers such as Almero, Pocket, Tide and Lint Group, often from the local area, building imaginative, smaller schemes appropriate for this emerging area. KALMARs reveal that these huge development initiatives are helping to drive confidence in the general environmental improvements in the area. This is reflected by a strong performance in capital values for both commercial and residential land/property. Since 2006 residential property values in the area have risen by 114% and this is before the regeneration has taken place.

Now new homes developments on Old Kent Road can command values of circa £700 to £800 per sqft. Sales demand from end users and investors for property across Greater London and the surrounding commuter region is currently highest for new homes selling between £500 to £900 per sqft, so £ per sqft values on Old Kent Road are highly appealing to developers, hence the significant demand from developers for potential development sites in the locality. This demand is illustrated by a new 53 unit development nearby on which KALMARs were agents that sold out within a month of practical completion at prices achieving within 3% of the £800 per sqft asking terms. KALMARs stress that the high demand for sites is having an impact on land values on Old Kent Road and the surrounding area. Data from GLA Economics shows that back in 2015, residential land values in the area were on average six times greater than industrial/commercial values. Now, due to investment yield compression, occupier demand, changes in users’ requirements and the huge potential for future redevelopment; the asking prices of commercial sites are either equal to, or just a third less in value of residential sites. The KALMARs report says that the large-scale development planned for Old Kent Road promises greatly increased prosperity, through the provision of new accommodation, jobs and facilities, ensuring that local residents can access the benefits that surrounding areas have already enjoyed.

The KALMARs report forecasts that the wave of development still has further to progress. The Old Kent Road Opportunity Area envisages the area having up to 20,000 new homes, in excess of 1m square feet of new commercial space, three new schools and nine school extensions, alongside £3.1bn invested in upgraded transport facilities, chiefly the new Bakerloo Line Extension. Therefore there is still significant scope for enhanced new development within the Opportunity Area. KALMARs Managing Director Richard Kalmar said, “Our new Old Kent Road Report explains how given the close proximity to central London this long overdue transformation has been held back by a lack of vision, which fortunately the Opportunity Area Action Plan has corrected, unusually the planning authority is actually more ambitious than some in the property world.”

Richard continues: “KALMARs, now in its 52nd year, has seen this before with the regeneration of the docks started 40 years ago, in which we were very active. This regeneration is now generally of tired industrial buildings and is a natural progression outwards from the old riverside industrial areas like Bermondsey.”

Richard said, “The £10.7bn investment in 20,000 new homes and commercial space will result in huge benefits, not only to the local community, but, given the scale and architectural ambition, to London in general. KALMARs is pleased to have already played a leading role in helping to identify sites, and advise developers in this dynamic market. Such a large change does not come without problems, especially addressing outmoded views has its challenges, which we have assisted in resolving. We look forward to continuing to contribute to the growth of prosperity in this exciting area.”

Richard added, “It may be a while before Old Kent Road replaces Mayfair on the Monopoly board but as an investment opportunity it has unrivalled potential and is very clearly destined to outperform other parts of central London in the short, medium and long term.”