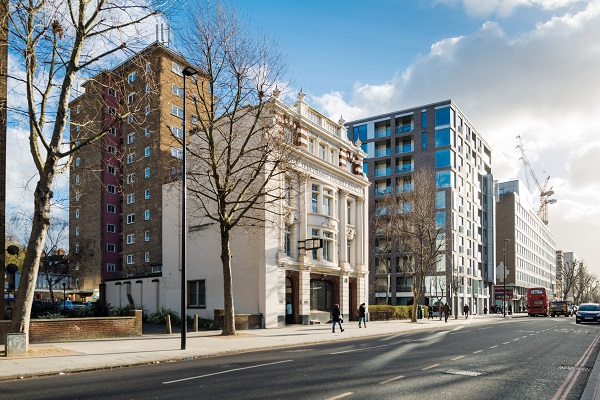 An iconic Edwardian building at 176 Blackfriars Road, which was once home to the sober order Sons of Temperance Friendly Society, has been purchased by Italian furniture designer Pianca with the potential of becoming their new London headquarters or a flagship store. The Grade II Listed building, built for the Sons of Temperance in 1910, provides 5,296 sq. ft. of office space and was successfully sold by leading South London estate agent KALMARs for £4.4m (freehold). 176 Blackfriars Road was once the headquarters of the London Grand Division of the Sons of Temperance Friendly Society from 1910 to 2013, during the height of the group’s popularity, a brotherhood which encouraged a sober lifestyle and provided a community for London’s teetotallers. The renowned Italian designer Pianca, a family of ‘woodworking masters’ which has been designing furniture for 14 generations, has plans to potentially turn the office into new London headquarters or a flagship store. The building was initially constructed in 1910, on the site of two terraced houses first occupied by Sons of Temperance in 1904. Designed by Arthur Charles Russell, an architect and honorary member of the Order, the property cost £5,400 to build at the time. The property bears the society’s name in striking decorative letters above grand pillars, as well as retaining original stained glass and mosaic roundels. Other features include ceiling heights of 3.5 metres and an emphasis on natural light throughout. Having last been refurnished in 2014, the building provides office space and ancillary accommodation over five floors, with features including a small meeting room on each floor, solid wood floors and comfort cooling throughout. The property has two entrances, with kitchen facilities on each floor and two large conference rooms on the ground floor. Until recently, the property was being used by an architect’s office. KALMARs note that given the property’s prominent position on Blackfriars Road it is well suited as a company’s London headquarters or flagship store.

Adrian Gurney, Director of the Office Agency department at KALMARs said, “176 Blackfriars Road is a striking building in a prominent position with its rich history as the former headquarters of the Sons of Temperance Friendly Society. The building’s original details are showcased whilst providing substantial office space of a high quality. This is one of the most iconic buildings along Blackfriars Road and KALMARs are proud to have been involved in its successful sale.” The Sons of Temperance society was initially founded in 1842 in New York and promoted an alcohol-free way of life. After gaining popularity throughout the United States, the society founded British divisions, with Liverpool being the first location in 1849. The London Grand Division opened in 1904, quickly becoming the largest division in the country. By 2007, the society had little over 8,000 members in the UK, eventually merging with Compass Friendly Society which is based in Hampshire.

176 Blackfriars Road is situated within walking distance of The Cut, for shops, restaurants and bars, and Borough Market for food stalls. Southwark tube station is a two-minute walk away for Jubilee line connections to Canary Wharf.