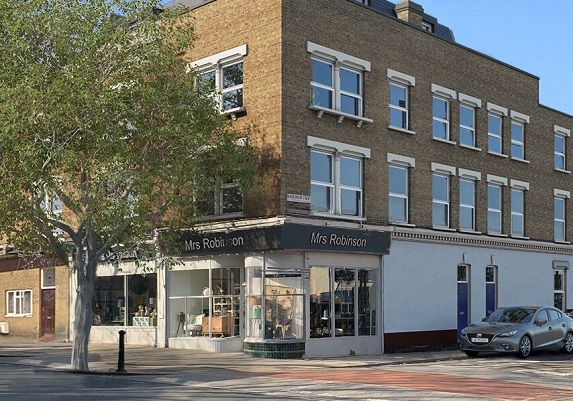 KALMARs, the leading South and East London estate agents, are pleased to announce the launch of Lordship House at 128-130 Lordship Lane in East Dulwich; a residential scheme by boutique developer Portobello Trust which provides eight new design-led one and two-bedroom apartments, including a penthouse with private roofterrace, set behind the retained Victorian façade of a locally well-known building.

Painted in 1871 by French impressionist painter Camille Pissarro, Lordship Lane serves as the local high street and hub for East Dulwich and is one of the oldest streets in the region, dating back to Tudor times and predating the Victorian buildings that line the lane. Lordship House and the other buildings on the street were originally constructed between 1865-1885, creating a local suburban-village which is now a sought after London address. Children’s author Enid Blyton (1897-1968) was born on Lordship Lane on 11th August 1897. The Blyton family lived in an apartment located above the cutlery shop owned by Enid’s father Thomas Blyton. Blyton’s famous books The Famous Five and Secret Seven were partially inspired by the surbuban-village life provided by Lordship Lane and East Dulwich. The apartments have been built to a high specification devised by interior designer Josh Stone of design house Caroline Peterson Interiors, who has been voted one of the UK’s top 100 interior designers.

Each apartment has a reception room engineered timber flooring, providing a living and dining area. The fully fitted bespoke-design kitchen is located off the reception room and has Carrera quartz worktops, sleek white base and cupboard storage units and integrated appliances. The bedrooms have engineered timber flooring and fitted wardrobes with a selection of the larger apartments, including the penthouse, benefitting from a master bedroom suite with luxurious ensuite bathroom. The stylishly appointed bathrooms and ensuites have underfloor heating, marble and stone effect Minoli Tiles, fitted mirrors and white cantilevered sanitaryware. Marc Faure, Head of New Homes at KALMARs said, “The new apartments at Lordship House are located in the heart of East Dulwich on Lordship Lane, with East Dulwich Railway Station at the end of the high street providing easy access into Central London and Canary Wharf. This stylish apartment scheme has been created for design aware buyers who will appreciate the beautiful layouts and details provided by the high quality specification.”