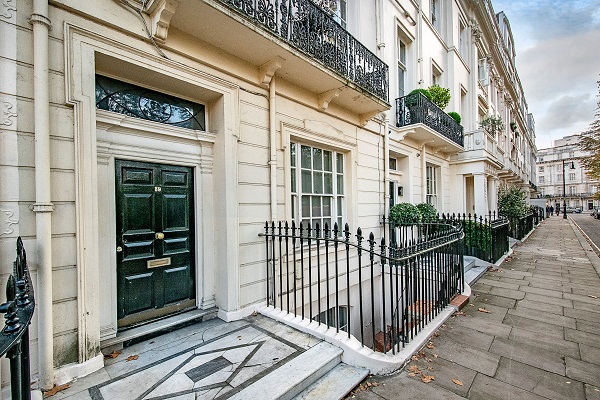 East Belgravia, an enclave of property between Upper Belgrave Street and Grosvenor Place, is currently undervalued compared to neighbouring addresses and is undergoing a development boom with £1.36bn of new luxury hotels and homes in the construction pipeline says the new East Belgravia Report, published by Beauchamp Estates. With analysis by Dataloft, the market intelligence group, the new East Belgravia Report has reviewed residential property sales between 2015-2019 and compares the Belgravia property market with PLC overall and surrounding districts, using data from LonRes, the Land Registry and Beauchamp Estates. Taking its name from Belgrave, a village in Cheshire close to the Duke of Westminster’s country seat of Eaton Hall, Belgravia was originally developed between 1820 to 1850 by Richard Grosvenor and Thomas Cubitt; characterised by grand terraces and squares of elegant white stucco houses with mews behind. The new report highlights that Belgravia is 200 acres (80 hectares) in size, bordered by Hyde Park to the North, Grosvenor Place/Buckingham Palace to the East, Buckingham Palace Road/Ebury Bridge Road to the South and Sloane Street/Chelsea Bridge Road to the West. Belgravia is significantly larger than neighbouring Mayfair (100 acres) and Knightsbridge (50 acres), yet has had far less new development. The fourth enclave is North Belgravia, focused around Wilton Crescent and Lowndes Square. The fifth is West Belgravia, between Eaton Terrace/Ebury Square and Chelsea Bridge Road. Based on sales over the last two years, average ultra-prime (top 5% of sales) residential £ per sqft figures for East Belgravia are now £2,562 per sqft, compared to £2,721 per sqft for the rest of Belgravia, and £3,168 per sqft for Mayfair and £3,301 per sqft for Knightsbridge (see data table at end for more details). The report observes that because East Belgravia is underpriced relative to neighbouring addresses there is currently £1.36bn of luxury development being undertaken in the enclave. There are eight new developments in East Belgravia including the new Peninsula London Hotel, providing 24-28 apartments and penthouses; a new luxury scheme at 6-7 Grosvenor Place, planned for a VIP club or house; the £300m refurbishment of Forbes House into London’s most expensive private mansion; a unique opportunity to acquire an unlisted property on Headfort Place, with planning permission for a new luxury townhouse designed by Adam Architecture, for sale for £6.5 million, and finally a £4.7m townhouse restoration project on Little Chester Street. There have also been two previous multi-unit residential development schemes on Grosvenor Crescent. Within the report, a development opportunity case study focuses on 39 Headfort Place, a rare opportunity to acquire for £6.5m an unlisted freehold house in East Belgravia, which benefits from an existing planning consent to demolish the current property and erect a replacement dwelling consisting of a beautiful white stucco classical house designed by Adam Architecture. With a proposed are of circa 3,800 sqft the new house over basement, lower ground, ground and four upper floors. The substantial new house would provide three reception/entertaining rooms including a grand drawing room and family/cinema room, family kitchen, four-bedroom suites, and five bedroom/ staff suite. The report highlights that because over 290 of Belgravia’s buildings are listed development opportunities are scarce and often complex. Since 2010 there have been just 11 new residential or luxury development schemes completed in Belgravia, with just six in the planning pipeline. The report shows that there is a similar lack of new development in North Belgravia, where most new construction consists of refurbishment schemes on Wilton Crescent and neighbouring streets. Currently there is an opportunity to acquire for £14.25 million an outstanding refurbishment project opportunity on Wilton Crescent to create a stunning mansion. In South Belgravia the most significant new development is Ebury Square, a major scheme of 71 apartments by the Berkeley Group. Development in Belgravia is highly polarised between either major corporate developers and investors who focus on doing multi-unit, hotel or luxury mixed-use schemes and boutique developers and design houses who undertake individual bespoke refurbishment or new build projects.

Beauchamp Estates observe that a significant number of Belgravia’s major corporate operators are from the Middle East and Asia, underlining the global appeal of real estate schemes in Belgravia as a long-term investment and trophy asset. Gary Hersham, Founding Director of Beauchamp Estates says: “The new East Belgravia Report shows that there is currently a £1.36 billion investment and development boom taking place across the Eastern side of Belgravia. Currently the value of property within this enclave is underpriced relative to neighbouring addresses and this has attracted inward investment from both corporate and boutique developers, with the regeneration taking place likely to generate an uplift in property values in the location over the next 2-3 years.” Jeremy Gee, Managing Director of Beauchamp Estates said, “This authoritative new report is the first to map in detail the various micro-markets within Belgravia. The findings show that there are five distinct enclaves within Belgravia each with unique characteristics, with the most significant hotspot for new development being East Belgravia. The other enclaves are restricted by listed building and conservation area status. Wherever supply is constrained compared to demand it helps to sustain capital values and this is why Belgravia property values have outperformed the rest of PCL. Over the last two years the average sales price in Belgravia is £4.96m, compared to just £2.37m for PCL overall.”