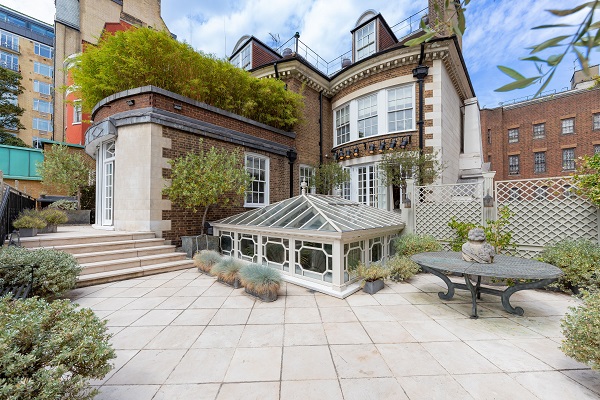 Situated at 28 South Street in Mayfair, an 8,513 sq ft Grade II listed mansion, formerly the London residence of Dame Barbara Cartland, the childhood home of Countess Raine Spencer, and the birthplace of Prime Minister Sir Alec Douglas Home, has been relaunched to the market with a fresh listing price by sole selling agent Wetherell, capitalising on the upturn in Dollar based buyers seeking homes in the capital.

Wetherell highlight that 28 South Street provides the ideal London trophy home for a buyer purchasing with US dollars, because the current exchange rate effectively gives dollar purchasers a 30% discount, which would cover the buyer’s Stamp Duty and moving in costs.

The South Street house was originally built in 1902-1903 and has a grand Edwardian facade with Arts and Crafts style detailing, commissioned by stockbroker and Liberal politician Sir Cuthbert Quilter (1841-1911), designed by Grosvenor Estate architect Detmar Blow, with internal detailing by Fernand Billerey.

Once complete, Quilter let the house to Lord Dunglass, where his son, Sir Alec Douglas Home was born on the 2nd of July 1903. Alec would grow up to serve as the British Prime Minister.

Sir Cuthbert Quilter’s widow was the occupant from 1911 to 1920, and his son, Sir William Quilter, from 1929 until the property was bought in 1936 by renowned romance novelist and socialite Dame Barbara Cartland and her second husband Hugh McCorquodale.

Barbara Cartland was one of the best-selling authors of the 20th century, writing some 723 novels by her death in May 2000, mainly romantic fiction set in the Victorian or Edwardian period.

Cartland lived in 28 South Street with her husband Hugh, their two sons Ian and Glen and her daughter Raine (Raine the offspring of her first marriage to Alexander McCorquodale, the cousin of her second husband).

During World War II Barbara Cartland based herself at 28 South Street and went to work for the War Office in Whitehall in various charitable capacities as well as working for the St John Ambulance Brigade for which she was later made a Commander of the Order of St John of Jerusalem for her services.

After World War II Barbara Cartland used 28 South Street as a place for entertaining family and friends who included Margaret Campbell, Duchess of Argyll, and Lord Mountbatten, uncle of Queen Elizabeth II and the Duke of Edinburgh.

It is also where she wrote her 1949 romance novel A Hazard of Hearts and her racy Guide to Married Life (1950), the latter banned in Ireland. Mayfair high society was scandalised in 1950 when author Georgette Heyer accused Cartland of plagiarism, alleging that A Hazard of Hearts was a copy of Heyer’s novel Friday’s Child (1944), but the case never came to court.

On the third floor of 28 South Street was the bedroom of Cartland’s daughter Raine (1929-2016), her childhood home. Raine is the subject of a new biography Three Times A Countess (2022) by Tina Gaudoin.

It was at 28 South Street in 1947 that the 18 year old Raine had her spectacular coming-of-age party and was named debutante of the year.

The following year in July 1948 the Mayfair mansion hosted a reception for the marriage of Raine to her first husband the Hon Gerald Humphrey Legge, who was to become the 9th Earl of Dartmouth. Raine’s second husband was the 8th Earl Spencer, when she became Countess Raine Spencer and the stepmother of Lady Diana Spencer (later Diana, Princess of Wales).

Barbara Cartland lived at 28 South Street until late 1950 when she sold the mansion and used the proceeds to purchase Camfield Place in Hertfordshire, formerly the country home of Beatrix Potter, where Cartland lived until her death in 2000.

Now the former London residence of Dame Barbara Cartland has been relaunched to the market for sale. The grandeur of the property is evident upon arrival with a stately entrance hallway with polished diamond limestone flagstones, a stone fireplace and a wide impressive wooden staircase, designed in a late 17th century style.

Also on the ground floor is a large dining room, a galleried study which has a balcony overlooking the atrium/courtyard and lower ground floor below; there is also kitchen and a cloakroom.

On the first floor are three reception rooms, one of which opens out onto the paved south-facing terrace garden, and a guest cloakroom. The second floor features the impressive principal bedroom suite, complete with an ensuite bathroom, dressing room and a private outdoor terrace, accessed through French doors.

The third floor accommodates two further bedrooms each with their own ensuite, whilst situated above on the top level of the property is the spectacular roof terrace, offering breath-taking views of Mayfair and beyond.

The lower ground level comprises the superb wellness suite, along with three further bedrooms, each with an ensuite. The wellness suite, designed by Nicholas Rakic, has a swimming pool, bar, sauna and relaxation zone, surrounding a central light-filled glazed atrium/courtyard with ceiling heights in excess of seven meters.

Recent planning permission also allows for the installation of a passenger lift over lower ground, ground and two upper floors and levelling out the large south facing roof terrace at first floor level.

Peter Wetherell, Founder & Chairman of Wetherell told LondonLovesBusiness.com, “28 South Street is one of the finest mansions in Mayfair, a beautiful property which combines period features with modern amenities including the spectacular wellness suite with swimming pool on the lower ground floor.

“The house has entertained Royalty, aristocrats and politicians and was the childhood home of both PM Sir Alec Douglas Home and Countess Raine Spencer, who is the subject of a fascinating new biography Three Times A Countess (2022) by Tina Gaudoin.”

South Street is well located for a range of amenities and is just moments from Park Lane, Grosvenor Square and Hyde Park. The world-renowned shopping streets of Bond Street and Savile Row are a five-minute walk from the property, whilst a wide selection of London’s finest restaurants, international music venues, leading museums, schools and universities are all within easy proximity.

From Bond Street underground station on the Queen Elizabeth Crossrail line, scheduled to open on 24 October 2022, it is anticipated the journey time from Bond Street to Heathrow Terminal 5 will take just 34 minutes.