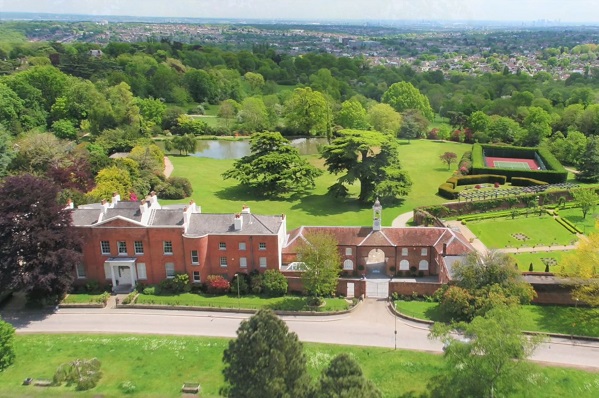 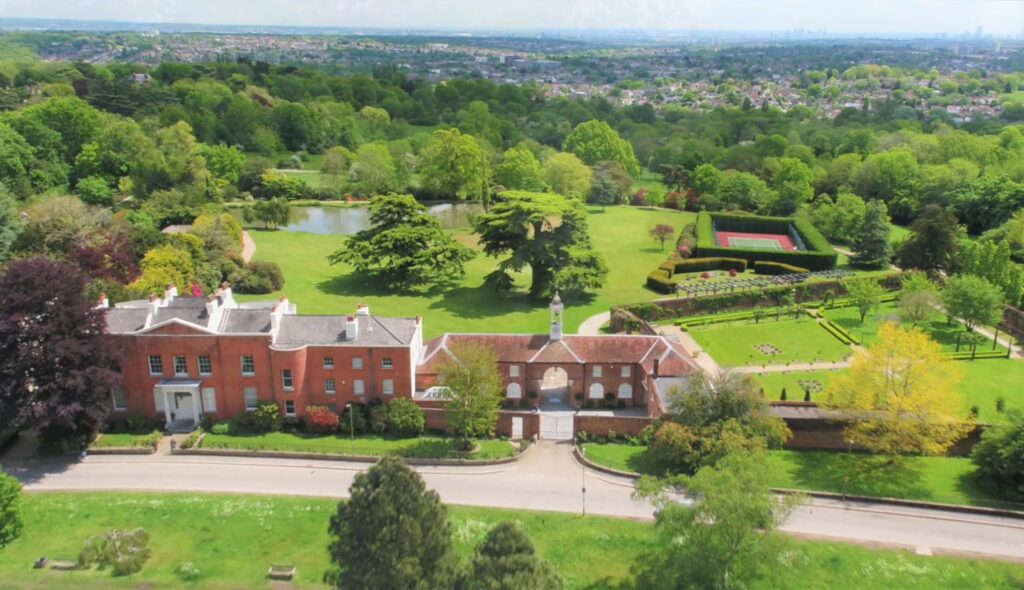 One of the most magnificent country house estates within Greater London to be placed on the market for sale in many years, Hadley House lies in the affluent enclave of Hadley some 9 miles north of the West End. The property is entered through wrought iron entrance gates and is set amongst sweeping manicured lawns and landscaped grounds which include an Italian style pergola, boating lake, tennis court, hedge enclosed flower garden and walled garden. From its elevated location, it offers outstanding views to the city and beyond from its rooms, terraces and gardens. 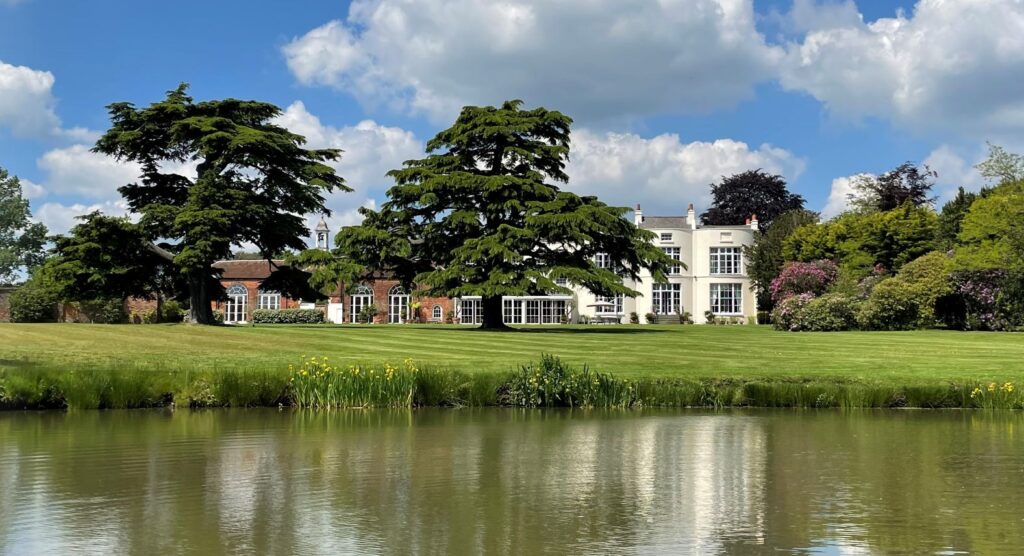 Overlooking to the front the 10 acres of historic Hadley Green- the site of the decisive battle of the Wars of the Roses- and with sweeping grounds and the lake to the rear, the large 17,260 sq ft (1,603.5 sq m) Georgian manor house, built in circa 1760, provides nine bedrooms, five reception rooms, three entrance halls, a 42 ft (12.8m) indoor swimming pool with retractable floor, gymnasium, games/media room, study, a family kitchen, estate office, staff preparation kitchen, staff accommodation and extensive garaging. With consent in place to add a further fine orangery extension, the property when fully developed will have a gross internal floor area of 19,417 sq ft (1,803.9 sq m). 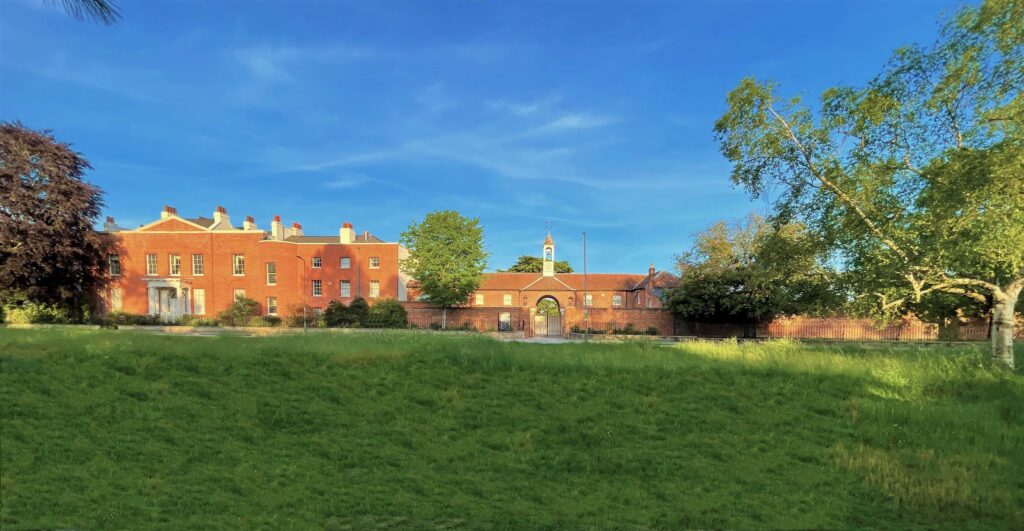 Hadley House was built broadly on its present footprint as a manor with 26 chimneys in the early 1500s and was originally owned by the monks of Walden Abbey. In 1535 King Henry VIII gifted it to his Lord Chancellor, Sir Thomas Audley, who sold the estate to local landowner Francis Goodyere in 1542.

On the death of Francis Goodyere in 1547 the property was willed to Sir William Staunford, Queen Mary’s Attorney General. In August 1558 Sir William died and in the November of that year the new Queen Elizabeth I was travelling to London to take up her throne and stayed at Hadley House during her journey. 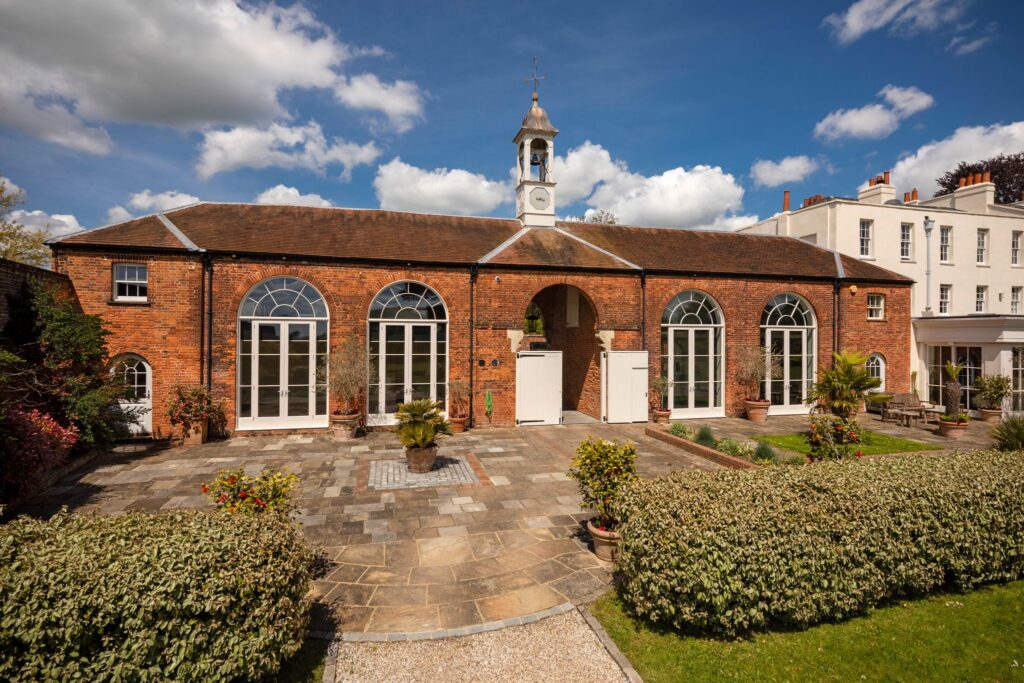 Between 1573 and 1726 the house was owned in succession by seven families before being purchased by the Pinney family who retained it till 1791. It was John Pinney who rebuilt the house and stabling in the Georgian style. Its red brick façade was added to the front in the late Victorian period and the side stable wing converted to garaging and staff quarters with the arrival of the motor car. 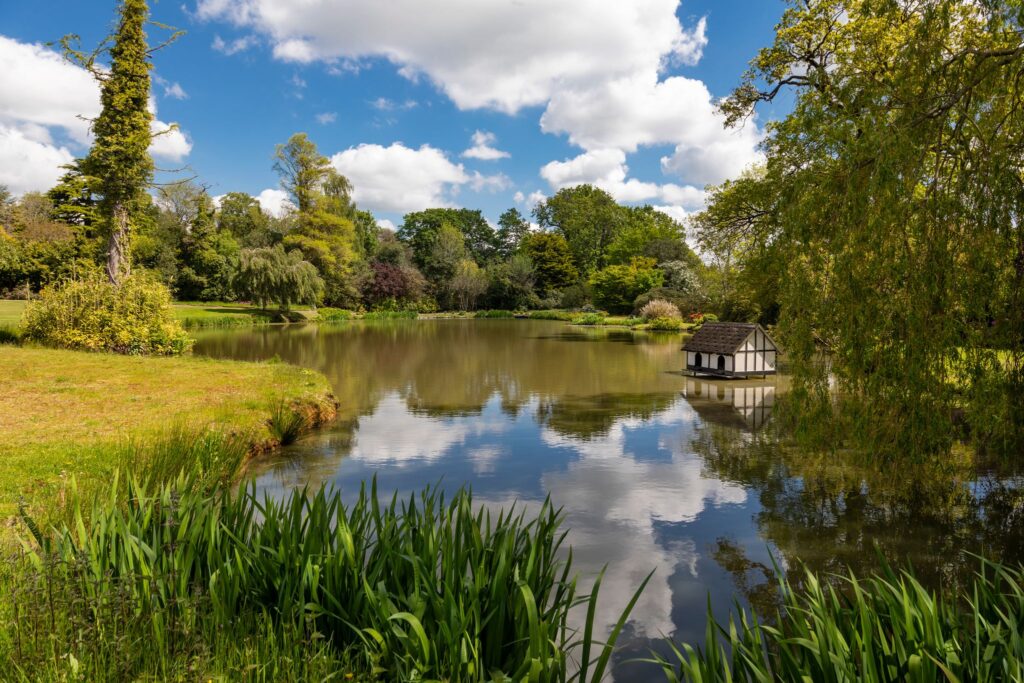 Louis and his cousin Alfred had an extremely strained relationship. Alfred’s clergyman father George Clayton Tennyson (1778-1831) had quarrelled with his wealthy landowner father George Tennyson senior (1748-1835), who owned the Bayon’s Manor estate, Usselby Hall estate and over 2,000 acres of land in Lincolnshire and as a result the son was disinherited. Upon the death of George Tennyson senior in 1835 all the Tennyson family wealth was bestowed on Charles Tennyson and his sons George and Louis. In that same year Charles changed his family name to the more aristocratic sounding Tennyson d’Eyncourt. 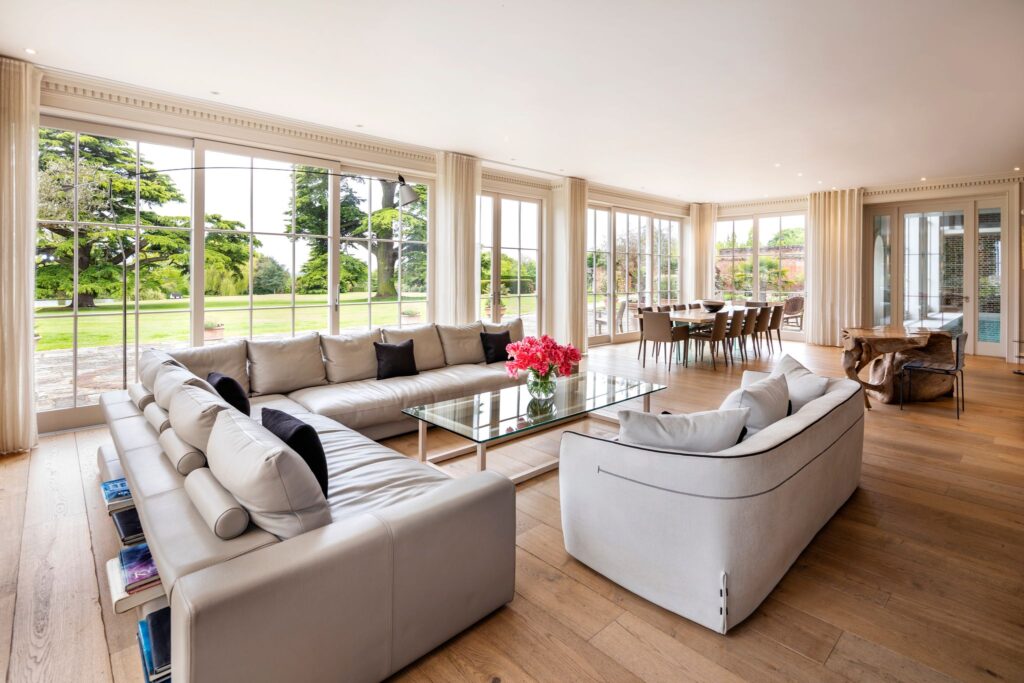 As a result, Louis purchased Hadley House using his inheritance whilst Alfred was forced to leave Cambridge University before finishing his degree due to the death of his father and constrained financial circumstances. Alfred published poetry to maintain a small income and lived just 18 miles away from Louis at Beech Hill House in High Beach village, Epping Forest, in much humbler accommodation compared to the grandeur of Hadley House. 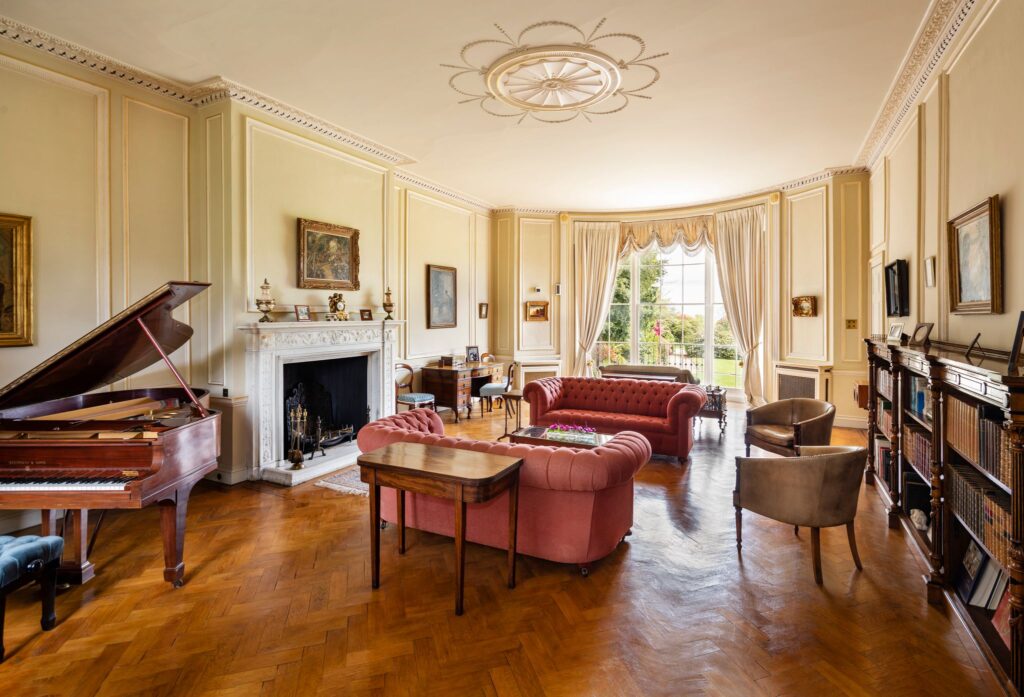 Because of the disinheritance family gatherings at Hadley House between the two branches of the Tennyson family were fraught and limited to weddings, births and funerals. Alfred had the peerage, granted in 1883, but Louis controlled the fortune. Louis occupied Hadley House with his wife Sophia until 1880 when they then relocated to Bayon’s Manor which Louis inherited on the death of his elder brother George. Between 1880 to 1926 the house was owned by the Elliott family, the owners of the photographic firm Elliott and Fry. 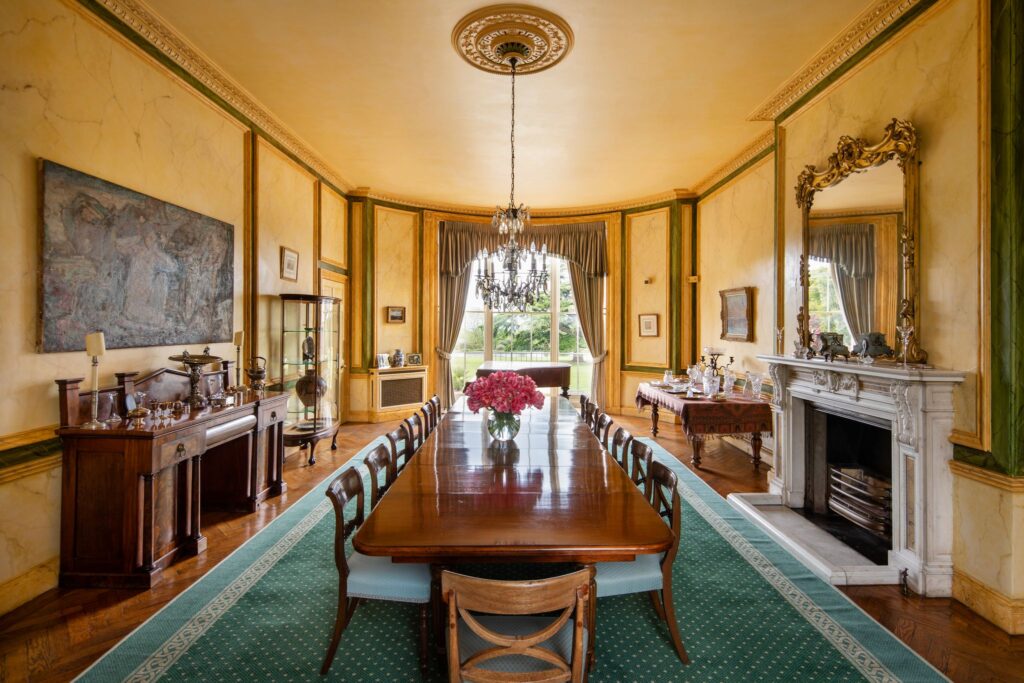 From 1926 until his death in 1982 Hadley House was owned by the industrialist Archibald William Stone (1882-1982), the founder in 1925 of Palmer & Harvey, which grew to become the UK’s largest wholesale distributer and 5th largest private company (the Ocado of the post-WWII era) whose clients included Esso, Royal Dutch Shell, Tesco and Sainsburys. 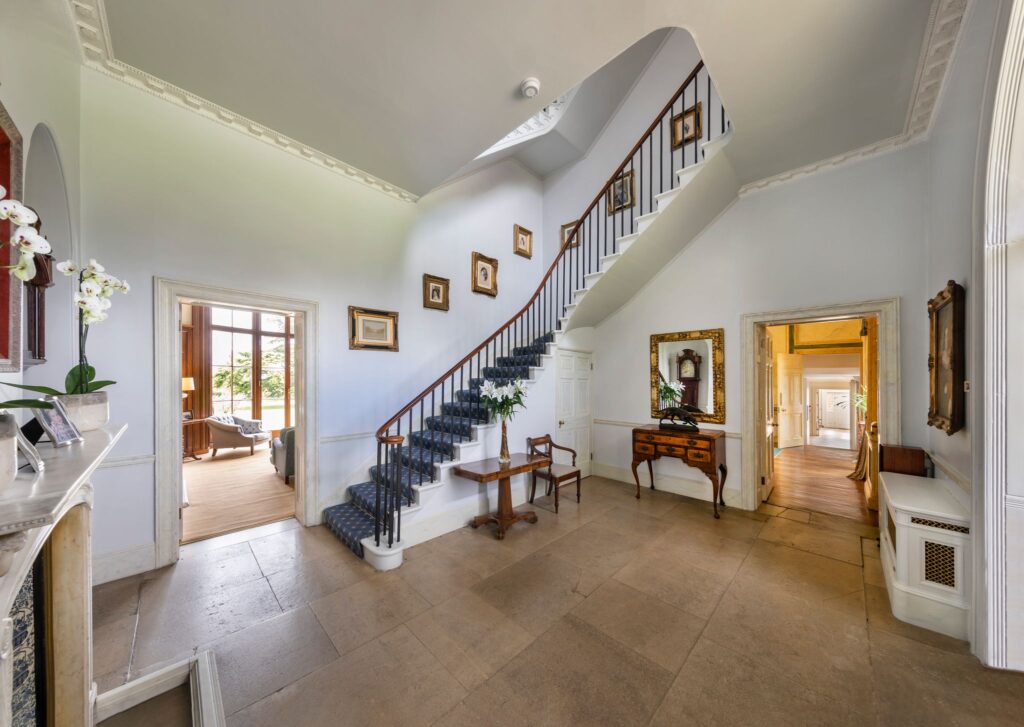 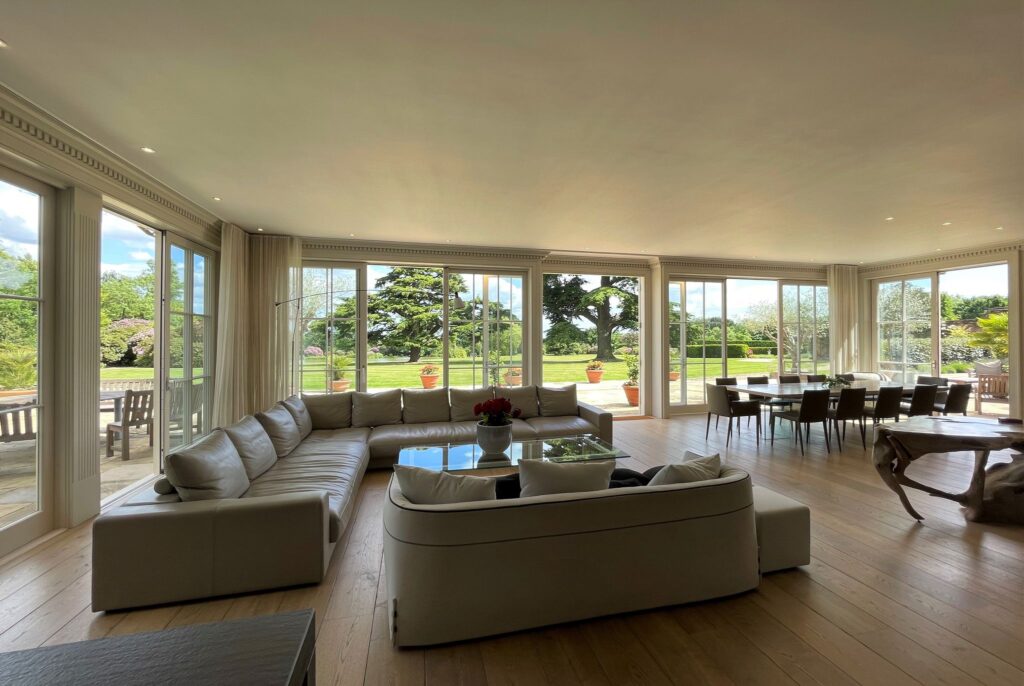 When Archibald died in his 100th year in 1982 Stone’s executor Sir Donald Gosling sold the property to another industrialist Anthony Wilson and his wife Martine. Twenty-five years later, in 1998, Anthony sold Hadley House to its current owners, who have within the historic property a modern luxury home.

Working with teams of architects and designers, the owners first converted a myriad of former servants’ rooms into a new focus for family living, a 1500 sq ft light-filled room with full height glazing on three sides showcasing the gardens and the lake. This new living area connects on one side to a triple-height hall housing a 35 ft swimming pool whose state-of-art machinery adjusts the water floor to the desired depth at the touch of a button. 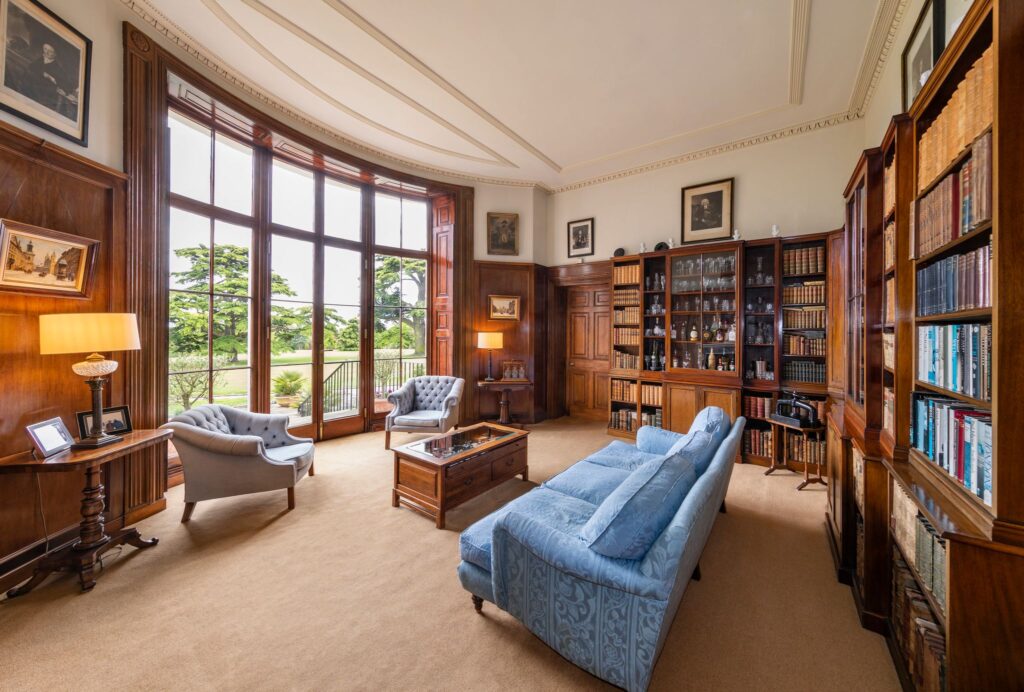 To the other side are the magnificent formal reception rooms, among them a library with leather-bound books which, by custom, each successive owner leaves to the next. Historic cellars and galleries have been converted to modern media, games and gym facilities.

The upstairs areas were also comprehensively refurbished, with modern bathrooms added to the numerous bedrooms; the master bathroom and dressing suite is particularly striking, with its rhythm of five ceiling-height window bays facing the gardens and lake. Overall, the architectural transformation, the most extensive change to the house since Georgian times, has created a home which combines 21st century facilities with 18th century history. 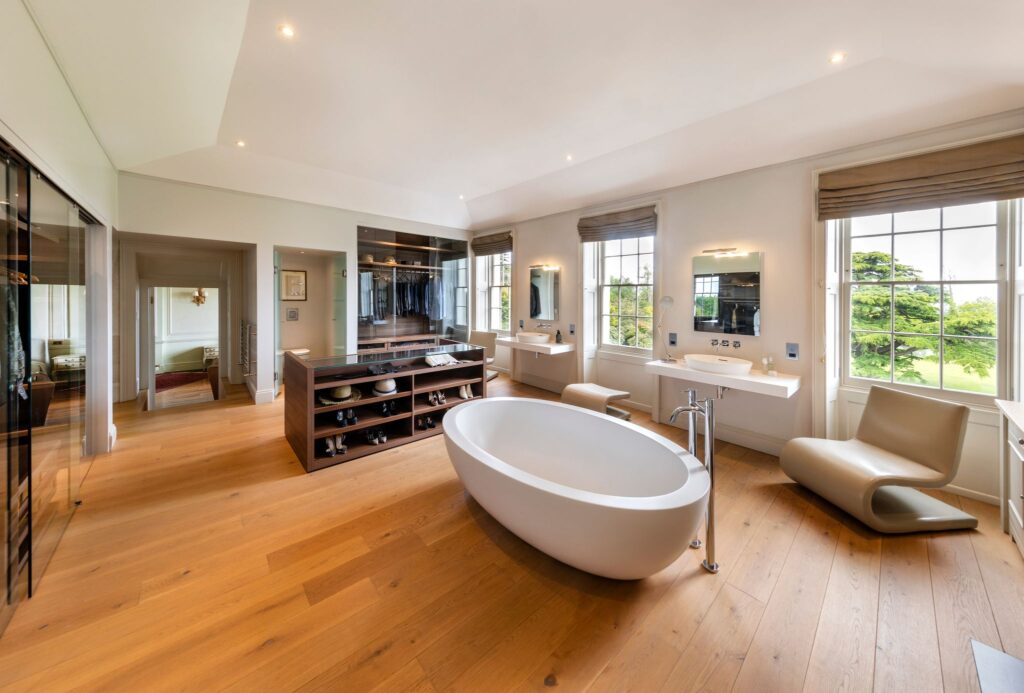 Now, for the first time in over 20 years, Hadley House is for sale. To the front the main house has a brick façade with inset detailing, tall sash windows and an elegant entrance porch with Doric columns. The rear façade of the main house is white stucco with three bays with large windows, a ground floor extension with full height windows, and to the brick side wing a series of double-height French doors with fanlights above; all opening onto a large stone paved terrace.

Beyond the terrace are the beautiful sweeping rear lawns and landscaped grounds including the lake, an Italian style pergola, a walled garden and a hedge enclosed flower garden, complete with gravel pathways, mature trees and beds with planting. 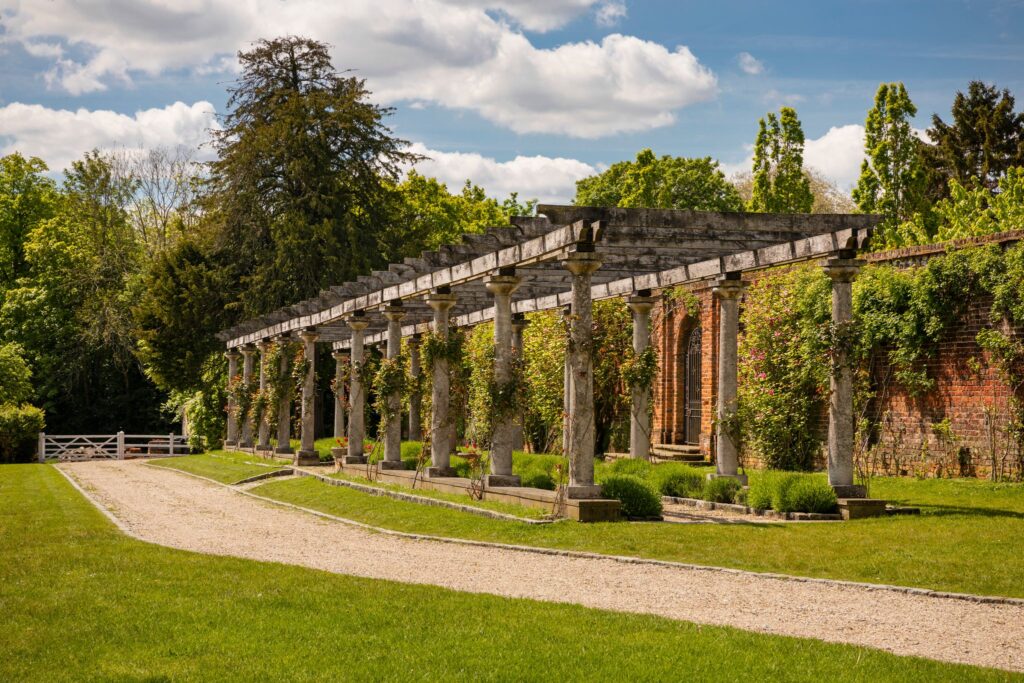 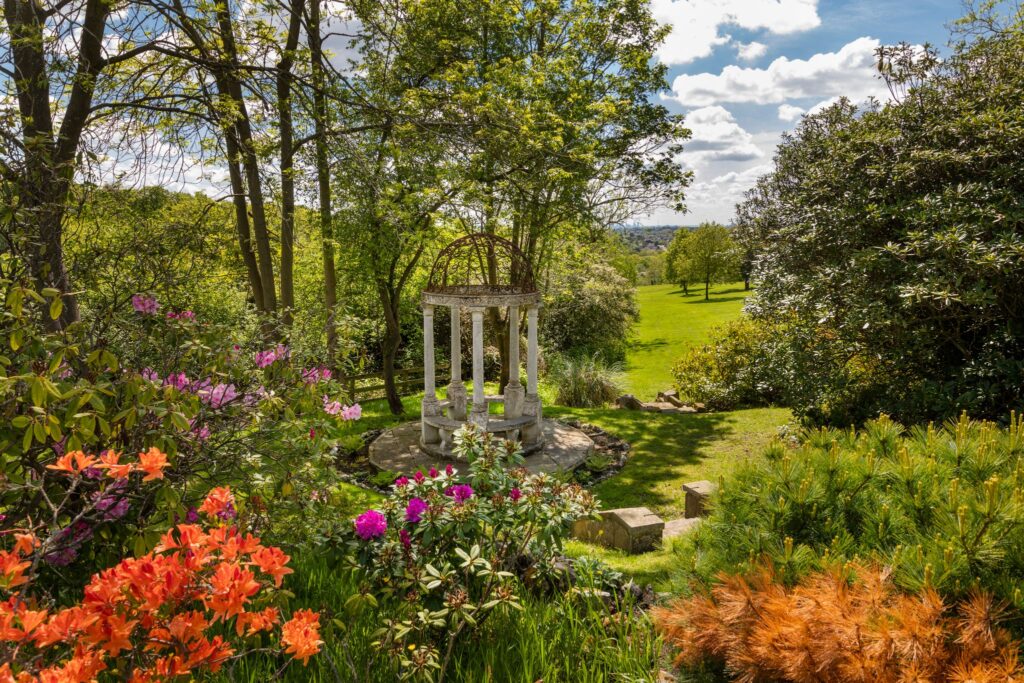 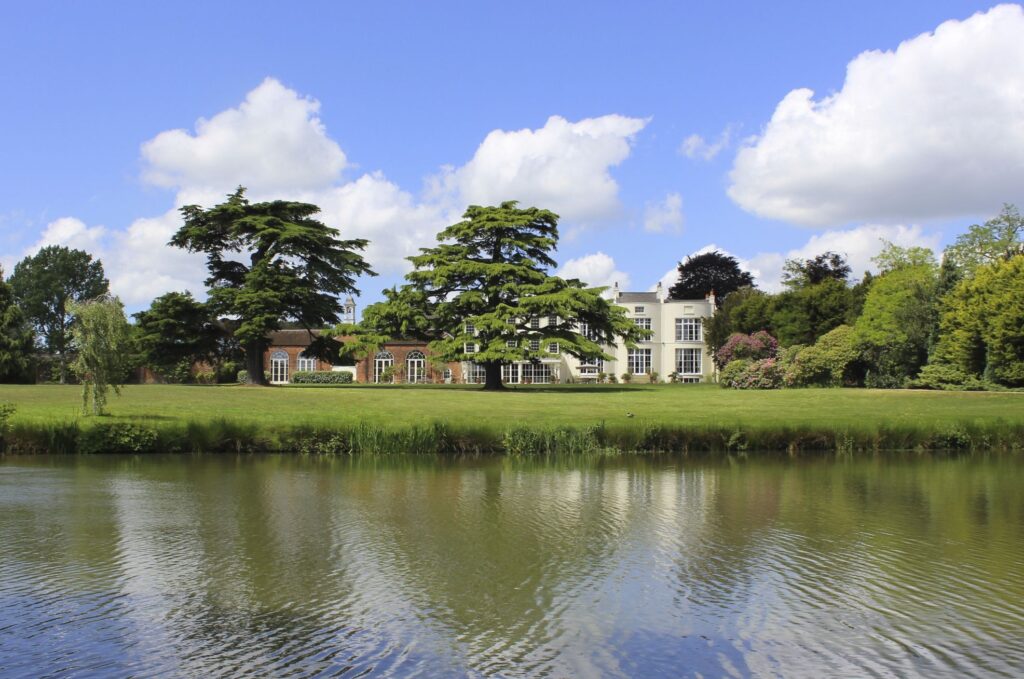 In the side wing is the stunning swimming pool room with a double-height vaulted ceiling and tall doors opening onto the paved terrace. The pool has a retractable floor, lowered to create the swimming pool, or raised to transform the room into an entertaining space. 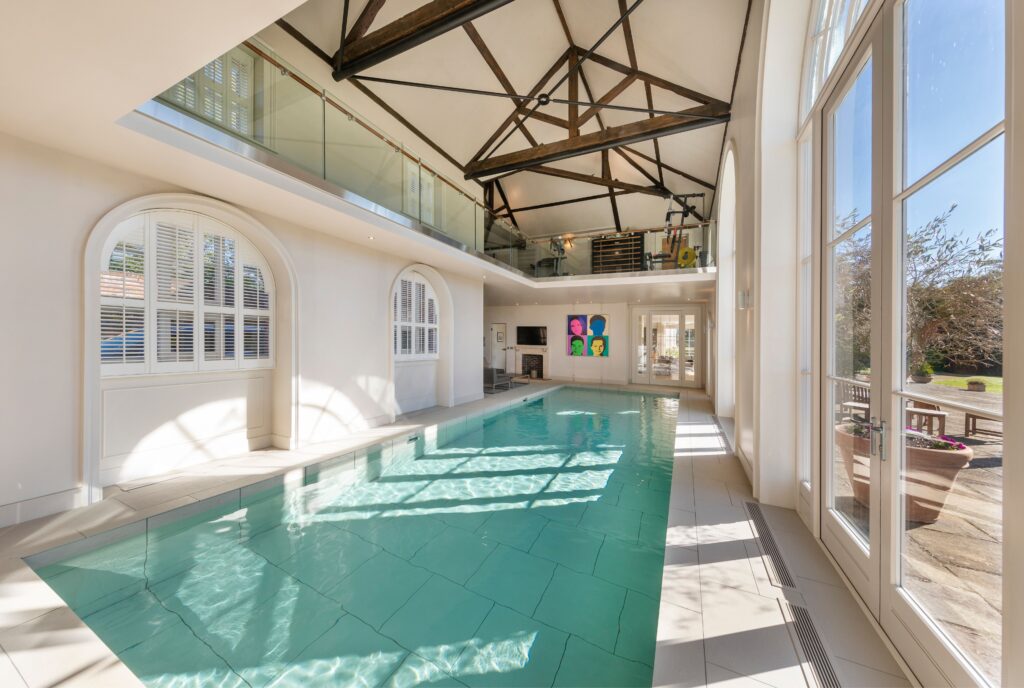 On the mezzanine level is the gymnasium, opening onto a roof terrace, along with a galleried landing overlooking the swimming pool below. Also on this level are two bedroom suites, both with ensuites, sitting above ground floor extension/family room. The side wing is complete with a further double reception room with tall doors opening onto the terrace, perfect for large informal parties, three further bedrooms, staff accommodation and garaging. 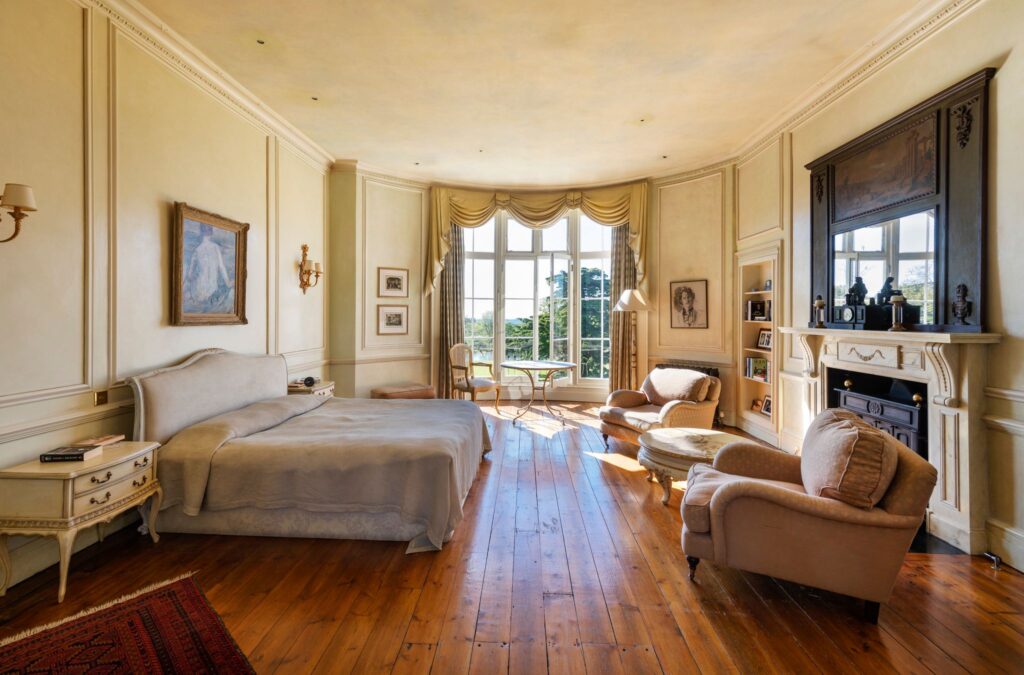 In the grounds of the estate the tennis court is shielded from the wind on all sides by mature hedging and the large lake has a jetty for mooring rowing boats. The walled garden provides for a former orangery which has planning consent for re-instatement with additional opportunities for creating outbuildings on the estate. 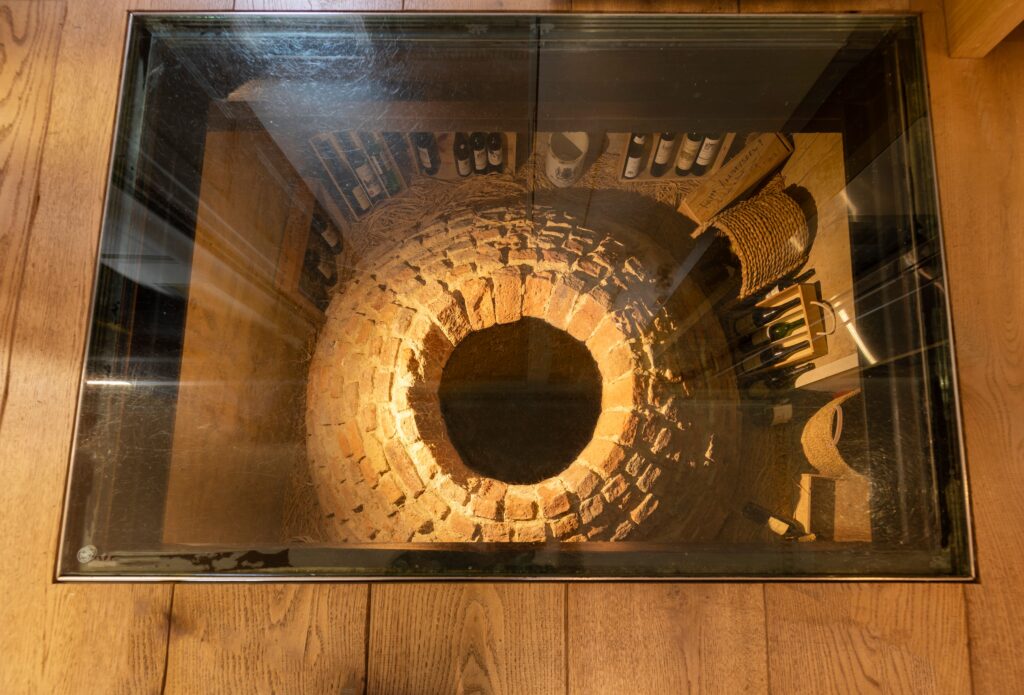 Jeremy Gee, Managing Director of Beauchamp Estates said, “With a history that combines Queen Elizabeth I, the Tennyson family of poet laureate Lord Tennyson and captains of industry Hadley House in Hadley Green is the finest country house to be listed for sale within Greater London for a number of years. 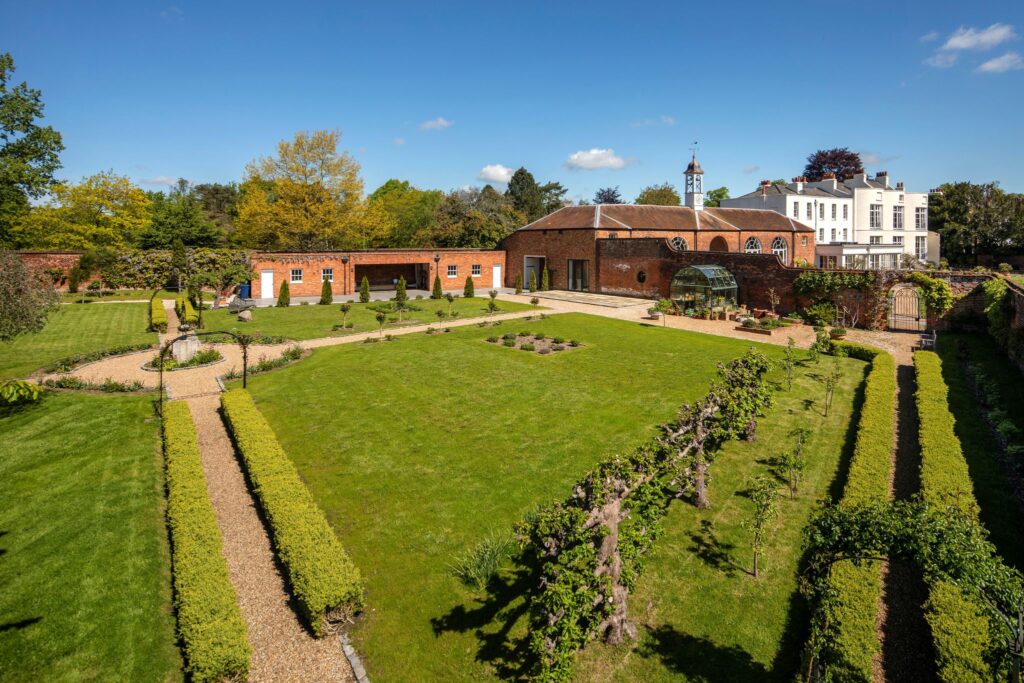 “The fully modernised house and manicured gardens are beautifully presented and the estate offers all the amenities such as swimming pool, gymnasium, tennis court, boating lake and games/media room that buyers expect from a country house of this stature and quality.” 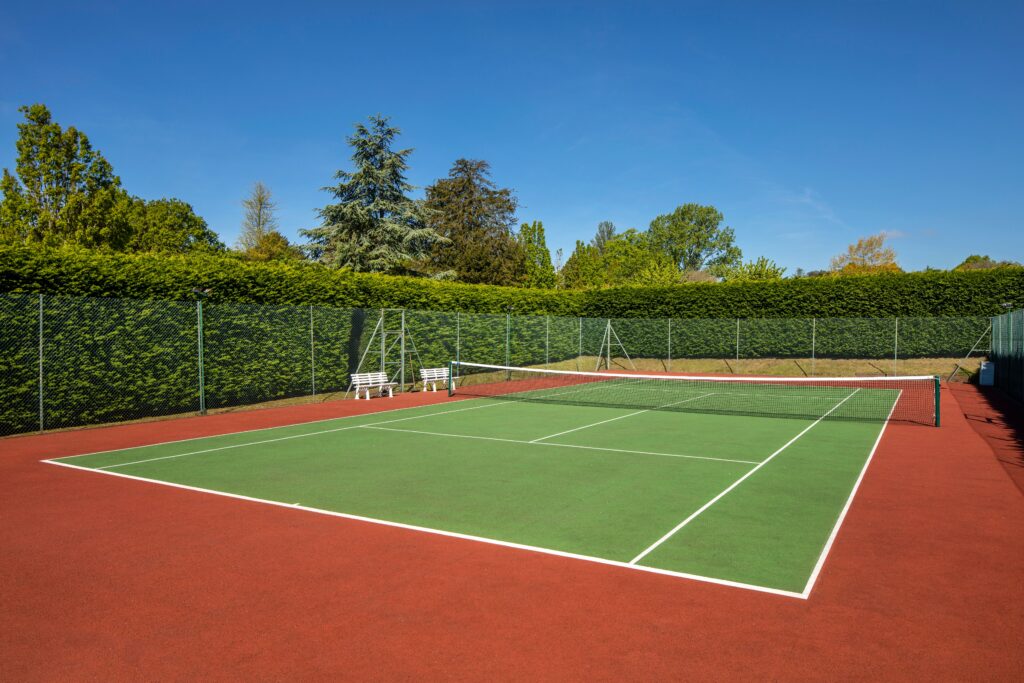 Nick Staton, co-Founding Director of Statons said, “Hadley House is an exceptional Grade II* listed family home set in almost 16 acres of gardens and land in a highly sought-after location in Hadley Green. The house and estate have not been to the market in over 20 years, and we anticipate that there will be significant domestic and international interest in this unique trophy London country estate.” 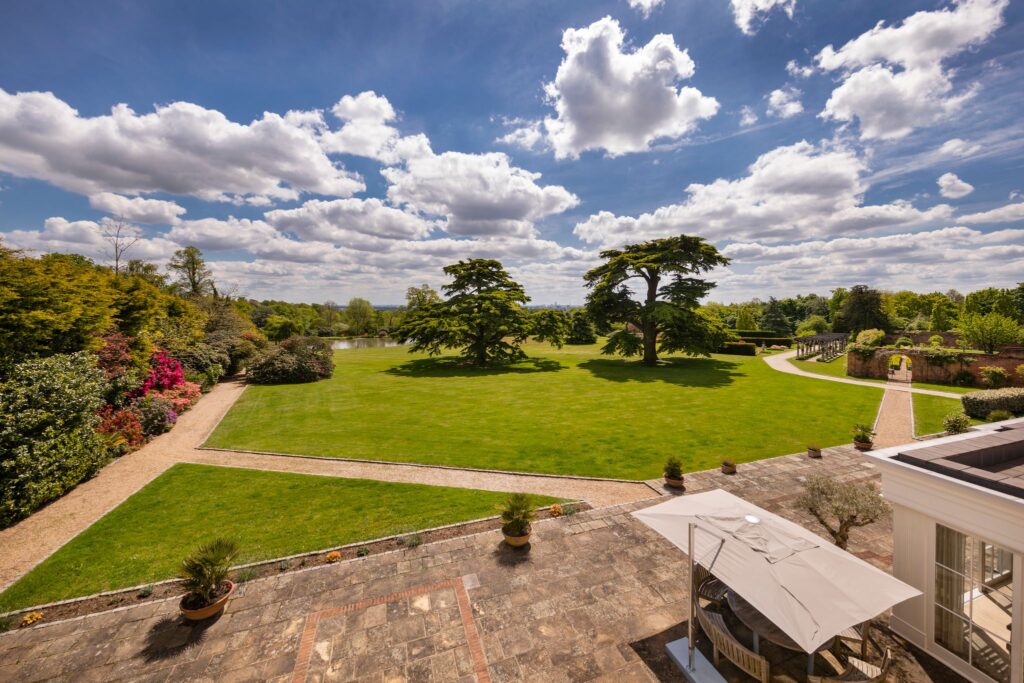