Home Lead Story Claridge House apartment up for sale for £4,000,000 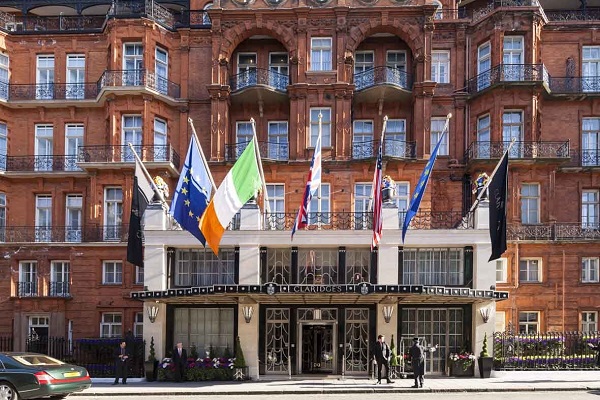 The vibrant spirit of Claridge’s hotel in the 1920s is revived in a stunning three-bedroom apartment in the period mansion block, Claridge House. For sale through luxury estate agent Wetherell for £4,000,000, the third floor, 1,348 sq.ft. apartment’s design was inspired by the iconic interiors of Claridge’s and is nestled between the landmark hotel and Berkeley Square on Davies Street.

The grand period building at 32 Davies Street was built circa 1924 and was constructed to the designs of S. Gordon Reeves, a famed architect who was also responsible for Dolphin Square and the Earls Court Exhibition Centre. During the late 1920s and early 1930s, residents at Claridge House were able to get room service from the concierge desk at Claridge’s to their apartments in the mansion block. Located on the third floor of the building, the three-bedroom apartment will provide residents with a contemporary specification and layout, whilst retaining its original period features that were inspired by the interiors of Claridge’s hotel. Residents will also benefit from a 24-hour porter service, a grand entrance lobby, original staircase and lift services. Features of the apartment include ceiling heights of over three metres with exquisite original cornicing giving the space an atmosphere of grand opulence. The vast drawing room includes a stunning Art Deco fireplace, preserving the apartment’s 1920s character, whilst the adjacent dining room features the same parquet wooden flooring that spans the rest of the apartment and the same original cornicing to the vast ceilings. The dining and drawing rooms have large windows, giving the spaces an abundance of light, ideal for entertaining. Three immaculately dressed bedrooms sit further down the hall, each dressed elegantly with bespoke fitted wardrobes, whilst preserving the traditional atmosphere of the apartment. Two marble fitted bathrooms sit adjacent to two bedrooms, with one being a master en-suite, and the kitchen is designed in a contemporary style of cream tones with integrated NEFF appliances. The iconic Claridge’s hotel epitomises timeless elegance. In the early 1800s, William and Marianna Claridge ran their hotel in a single house at 51 Brook Street after buying it off of former owner James Mirvat who had been running it has ‘Mirvats Hotel’. In an ambitious move to expand their business, the couple bought the adjoining five buildings in 1854, and Claridge’s then opened in its own right in 1856. Claridge’s has been favoured by many royals, with several royal parties being held there over the years. These events have included the HM The Queen and HRH The Duke of Edinburgh’s Ruby wedding anniversary and the wedding reception for HRH Prince Charles and Diana, Princess of Wales. Queen Victoria and Prince Albert’s regular visits were also instrumental in giving it the reputation it has with royalty today. Fashion leaders like Diane von Furstenberg have also had a long relationship with the hotel, with her first interiors work being at Claridge’s. Her fellow guests include Aristotle, Jackie Onassis and HM The Queen Mother. Many other fashion favourites such as Kate Moss and David Linley have also favoured the iconic hotel, holding events and projects there. Peter Wetherell, Founder and Chief Executive of Wetherell said, “This exceptional Mayfair apartment, beautifully designed with original features, offers a glimpse into the original architecture of 1920s Claridge’s. Claridge House is a traditional and timeless Mayfair apartment block that offers exquisite views of Davies Street and Claridges. The history, Art Deco design and prime location of the apartment are features that are truly unique.”