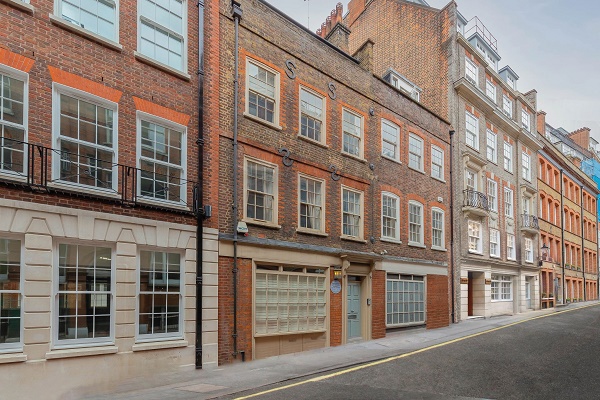 One of the oldest houses in the area, the Old Queen Street property bears a blue plaque dedicated to Richard Savage (1660-1712), Lord Colchester and eventually Constable of the Tower of London, who lived in the house after it was built in c.1698, towards the end of his life.

The renovated interiors contrast with the strong period brick charm of the exteriors creating a unique home, representative of its long history across five centuries as one of the oldest Grade II Listed private properties in Westminster.

The property on Old Queen Street spans five floors, from a basement to a third floor, and is entered on the ground floor into a hallway off of which sit the interconnecting reception, dining room and kitchen.

The ground floor reception room offers plenty of natural light due to the large picture frame window with white wooden shutters to obscure the view from the street.

The focus of the room is the sizeable pen fireplace and mantel piece, perfect for displaying prized possessions and family photos. Accessed through an archway in the reception room, the dining room feels virtually open plan, perfect for hosting dinner parties or drinks with friends where guests can float between rooms.

The kitchen, through the dining room, is flooded with light through a sky light, adding a modern feel to the ground floor echoed by the cream tiles and contrasting sleek cream and dark brown cupboards, complete with integrated appliances.

The second and third floors both feature substantial bedrooms and en-suites both with walk in showers, freestanding baths and double sinks.

The basement level provides versatile accommodation across two rooms that can be used as a media room / snug or a bedroom and a further bedroom at the rear of the house or a third reception room / study.

This flexibility means that this home, ideal for a family, can adapt as the number of residents changes over time.

Set within the Birdcage Walk Conservation Area, the Old Queen Street property is situated between Buckingham Palace and the Houses of Parliament making it the perfect abode for a man such as Richard Savage to call home – his residence marked by the blue plaque by the front door.

After becoming Lord Colchester on his brother’s death, Savage entered parliament as a member for Wigan in 1681. Obtaining a position and promotion in the army, Savage served in King William III’s war in Ireland and in the Netherlands.

Due to his service to his country and King, Savage was made Major-General in 1698 and Lieutenant-General in 1702. Two years before his death Savage was appointed Constable of the Tower, the most senior appointment at the Tower of London in charge of the principal fortress defending the capital city of England.

Old Queen Street itself has seen many names, faces and institutions over the years since its creation dating c. 1547 including the former home of the Beaverbrook Foundation established by Lord Beaverbrook (1879-1964) and The Spectator Magazine headquarters since 2007.

The draw to this street, itself the picture of charm and tranquillity, is also because of the bustling and interesting surroundings being minutes from St James’ Park, Buckingham Palace and Westminster – everything buyers could need for touristy afternoons, family strolls through the park or working in the city.

Harry Laflin Manager of DEXTERS Westminster Office told LondonLovesProperty.com, “This unique property will make a wonderful family home, in the centre of all the best London has to offer currently as well as historically.

“Renovated to provide modern living whilst retaining its Grade II Listed charm, the Old Queen Street home benefits from adaptable spaces, perfect for expanding families. Marked by a blue plaque, on a street and in an area rich in British history, this home is a story itself, just waiting for the right buyer to come along and make their own mark.”

The four-bedroom Old Queen Street property is for sale with DEXTERS for £3,750,000.  For further information, or to book a viewing, please contact DEXTERS Westminster Office on 020 7590 9570 or visit https://www.dexters.co.uk