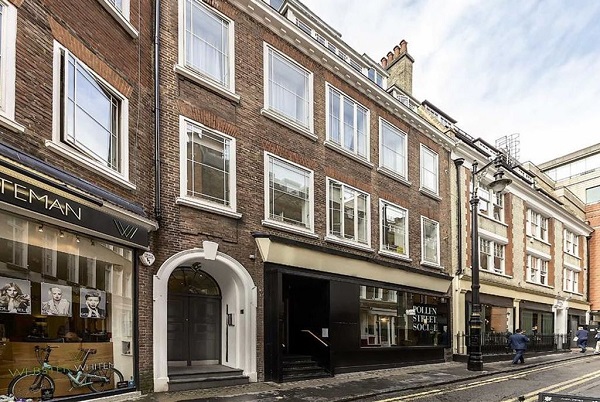 Stylish, contemporary and perfectly dressed and presented, just like its esteemed owner; the architect designed Mayfair penthouse of Richard James OBE, the leading British fashion designer and bespoke Savile Row tailor is for sale, the two bedroom duplex at 11 to13 Pollen Street provides 1,324 sqft of stylish accommodation comprised of 1,199 sqft of living space over two floors with a 125 sqft wrap around roof terrace on the upper level and a balcony on the lower floor. The designer’s stylish penthouse is for sale via leading agent DEXTERS. Richard James is the finest British menswear designer of his generation, renowned for the impeccable style and quality of his tailoring. After studying fashion at the Brighton College of Art Richard James joined fashion store Brown’s where he worked as a buyer. On 27th November 1992 he founded his bespoke Savile Row tailoring and contemporary menswear company – Richard James – with his business partner Sean Dixon, the pair opening the inaugural Richard James shop at 37a Savile Row which became the first tailor on the Row to open on a Saturday. One of the first visitors was British couturier Sir Hardy Amies, designer to HM The Queen, who arrived in his chauffeur-driven limousine, casting his eyes over Richard James’ bold blue, bright pink and acid green contemporary-cut jackets before smiling. Sir Hardy was followed by Sir Elton John and Gianni Versace, who both bought garments from the rails. In 1995 headlines were made around the world when it was revealed that the Queen’s nephew David Linley measured for his Richard James suits astride his motorcycle. In 1996 James was awarded the Evening Standard Eros Award for Retailer of the Year and was profiled in the Cool Britannia edition of Vanity Fair as the UK’s premier menswear designer. In 2000 the Richard James shop moved to its current flagship location at 29 Savile Row, the largest premises on the street. In 2001 Richard James was named by the British Fashion Council as Menswear Designer Of the Year. In 2004 Richard James collaborated with Tretorn and British Esquire, producing ‘the world’s best trainer’, which sold out within hours. That same year he became a founding member of the Savile Row Bespoke Association, introduced a denim range to the Row and launched in Manhattan’s department store Bergdorf Goodman. In 2005, wanting a home close to Savile Row, Richard James purchased the penthouse on the fourth and fifth floors of a converted former office building at 11-13 Pollen Street in Mayfair. The penthouse, located on the top two floors of a boutique residential building of just eight apartments, was the result of a stylish transformation overseen during 1995-96 by award-winning Toronto-educated architect Mark Guard of Mark Guard Architects (since 2002 Guard Tillman Pollock) and local Mayfair developer Samuel Properties. Bordered by floor-to-ceiling crittall windows on both levels, Richard James’ 11-13 Pollen Street penthouse has a bright and spacious timber floored reception room on the upper fifth floor, incorporating an open plan kitchen illuminated by a vaulted skylight which surmounts the entire length of the culinary area. Lined with silvery-grey units and white limestone worktops, the custom-design kitchen has a half-height white-fronted worktop which cleverly divides the kitchen from the main living space. The 27 foot long dual-aspect reception room offers rooftop views over Mayfair with three sets of double doors opening onto the wrap-around terrace which borders the entire living space. The sweeping views from the reception room include adjacent Vogue House on Hanover Square, which enabled a delighted Richard James to wave to his longstanding friend Dylan Jones OBE, the editor of GQ magazine and GQ Style, whose office was on one of the upper floors of Vogue House. On the lower floor the penthouse has a large principal bedroom suite with a walk-in wardrobe and an ensuite bathroom, alongside a separate shower-room with a large shower and a second bedroom with a West facing private balcony. At its unveiling 11-13 Pollen Street was praised by Wallpaper* and Architectural Digest magazines for offering the very best in “cool and functional contemporary design.” Understated and elegant, the penthouse was the perfect pad for this most stylish of fashion designers. It is here that Richard James has entertained friends and associates over the years and from the penthouse it is just a few minutes walk to the Richard James shops on nearby Savile Row. The penthouse also just a short stroll from Richard’s favourite fine dining and entertaining haunts of Scott’s on Mount Street and The Wolseley on Piccadilly. The same year (2005) Richard James moved into the penthouse he was proclaimed as one of the Evening Standard’s ES Magazine as one of the ‘Men of The Moment’. In 2017 Prince William chose to wear Richard James for the cover shoot of GQ’s July issue and in 2018 Richard James was made an OBE (Order of the British Empire) by HM The Queen for services to fashion and that year the brand opened its first New York store at 461 Park Avenue. In 2019, to celebrate the release of the Elton John biopic Hollywood movie Rocketman, Richard James displayed some of the special pieces it has made for the star at its Savile Row and Park Avenue stores. Now after living on Pollen Street in Mayfair for the last 15 years Richard James the man is moving out of London and going to the South Coast in order to be beside the sea. Richard James, co-Founder of Richard James said, “This Mayfair penthouse is a place where I was able to retreat from the bustle of Mayfair to think and create some of my most celebrated work. There were many times when you couldn’t see the floor of the penthouse for all the magazine and paper cuttings, fabric samples, open books and Swarovski crystals.

“I created the glittering wardrobe for my dear friend Sir Elton John’s ‘Million Dollar Piano’ show at Caesar’s Palace in Las Vegas whilst here and found the inspiration for suits worn by George Clooney and HRH Prince William to name but a few. We celebrated our 25th anniversary with Mark Ronson at LouLou’s just down the road and more recently launched our first USA store at 461 Park Avenue, New York all whilst living under this roof.” Richard James, co-Founder of Richard James added, “The penthouse’s cool and contemporary living space and the wonderful light here made it the perfect environment for sketching and provided the perfect inspiration for many suits, jackets and accessories that formed numerous Richard James collections over the years! I will be sad to leave but am very excited to be living by the seaside!”

Richard James, co-Founder of Richard James says: “I have loved living in the penthouse on Pollen Street for all these years but am relocating to Brighton where I studied art and design – in many ways it’s where my journey in the world of fashion first started. It’s time to relax away from the hustle and bustle of life in the capital to enjoy the fresh sea air and some good, long walks across the Sussex Downs.”

Richard James, co-Founder of Richard James said, “Mayfair is an inspiring place to live, you only have to go to a beautiful restaurant like Scott’s, and you see the ladies coming in, dressed up – heels on, made up and fantastically gorgeous. The Englishmen of Savile Row are the best dressed in the world, they do it without a care and have a sense of history.”

Robert Britten, Sales Manager at DEXTERS (Mayfair) added, “Richard James’ penthouse at 11-13 Pollen Street is one of the most stylish contemporary apartments in Mayfair. The floor-to-ceiling windows fill the living spaces with light and provide a fantastic bright and airy ambience. Finished to an exacting specification the architect designed penthouse provides exceptional open plan living space.”

MGAM, an Acrisure partner, SCOR, Aon and the Department for Levelling Up, Housing and …