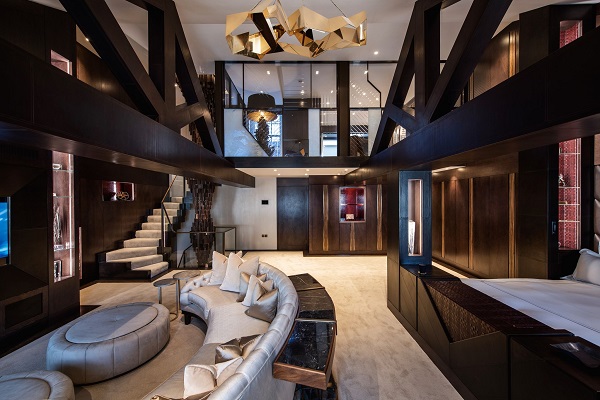 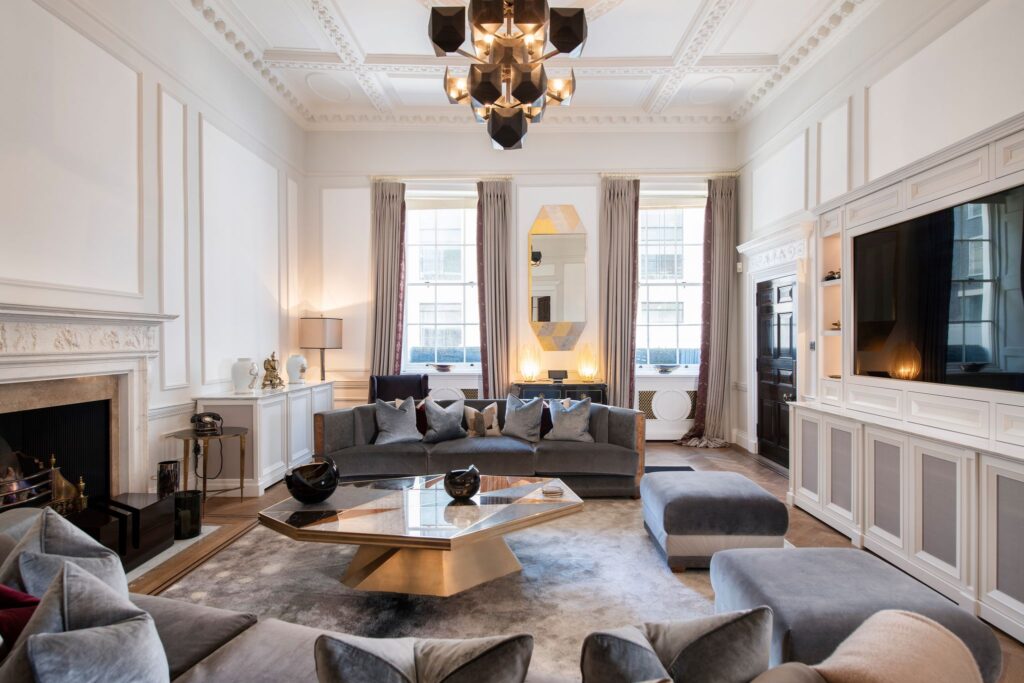 The palatial Gucci mansion was originally built in 1769-1772, designed in Neo-classical style by architect Sir Robert Taylor, built by Edward Gray with magnificent gold leaf interiors by renowned plasterer Joseph Rose and cabinetmaker John Mayhew; under the auspices of landowner the Earl of Grafton.

Formerly the London home of Lord Chancellor Lord Brougham, where HM Queen Victoria and the 1st Duke of Wellington were entertained, the Grafton Street mansion’s Gucci history can be traced back to 1993 when Bahrain-based investment fund Invescorp purchased Gucci from Maurizio Gucci, ending the Gucci family’s involvement which dated back to 1921 when Guccio Gucci founded the luxury brand. 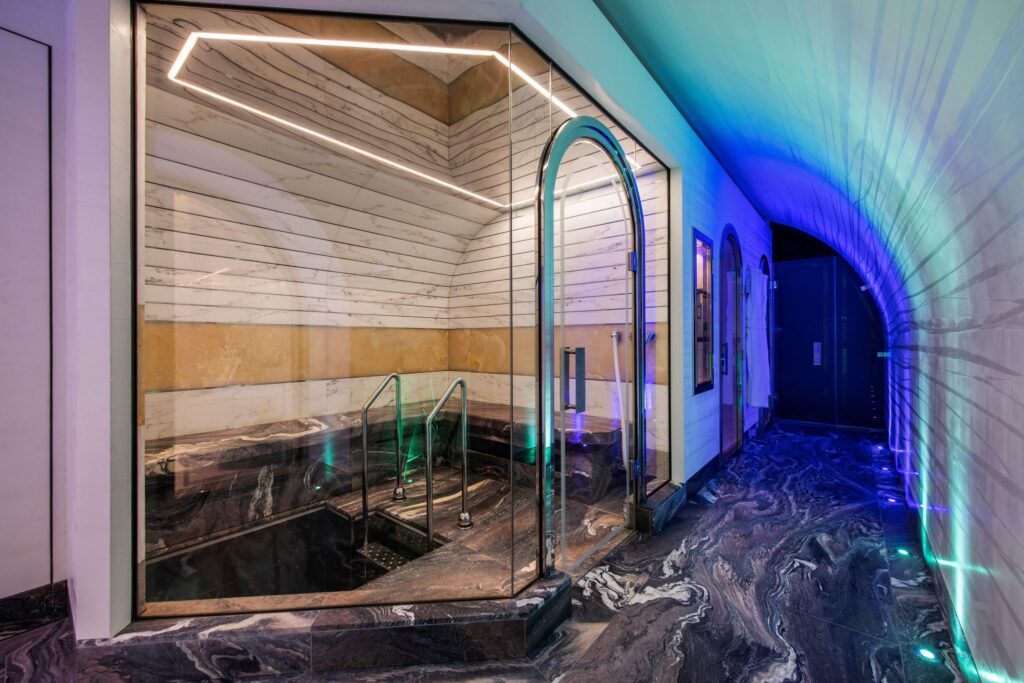 In 1994, following the Invescorp takeover, Texan designer Tom Ford was named Creative Director of Gucci and Domenico De Sole (legal adviser to the Gucci family since the early 1980s) was made CEO, with De Sole listing the company on the New York Stock Exchange in October 1995.

In March 1995 Maurizio Gucci was shot dead in the lobby of Gucci’s Milan headquarters by his ex-wife Patrizia Reggiani Gucci and this led to a decision that Gucci should seek a new HQ, ideally away from Milan, so that the brand could benefit from a fresh corporate identity and leave the tragic past behind. 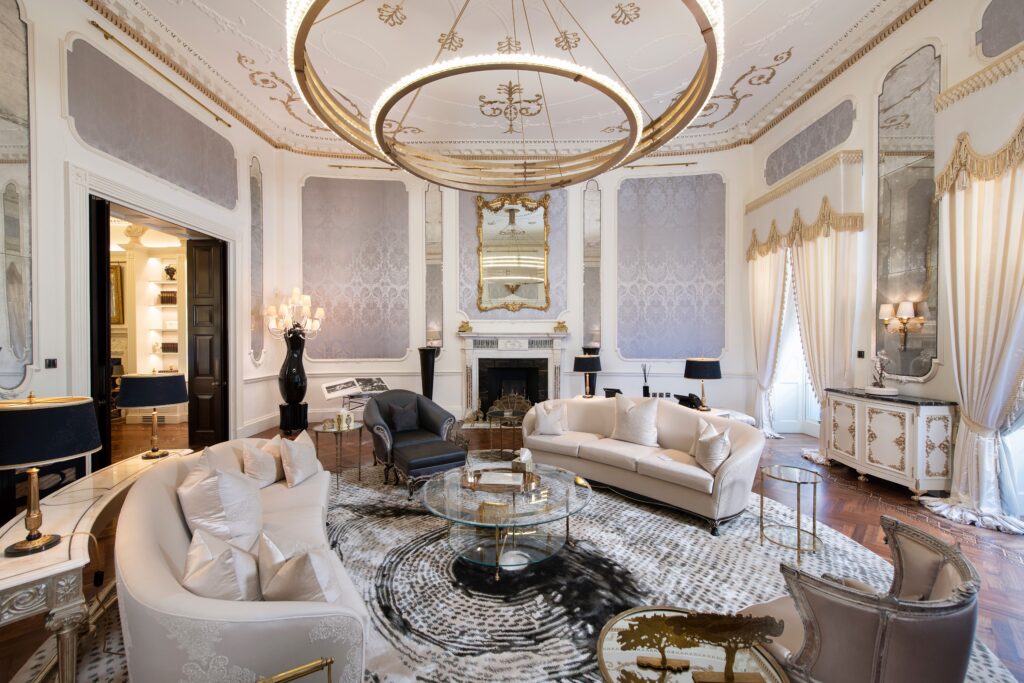 As a result, in 1998 Gucci’s global headquarters relocated from Milan to London, with the new Gucci Mansion on Grafton Street (close to Gucci’s Bond Street store) becoming a base for Tom Ford and Domenico De Sole. The mansion had been given a 24-month refurbishment prior to Ford and De Sole moving into the palatial building with the lavish rooms dressed with Gucci custom-designed furniture including chocolate veneer desks and cabinets and black calfskin sofas and chairs. 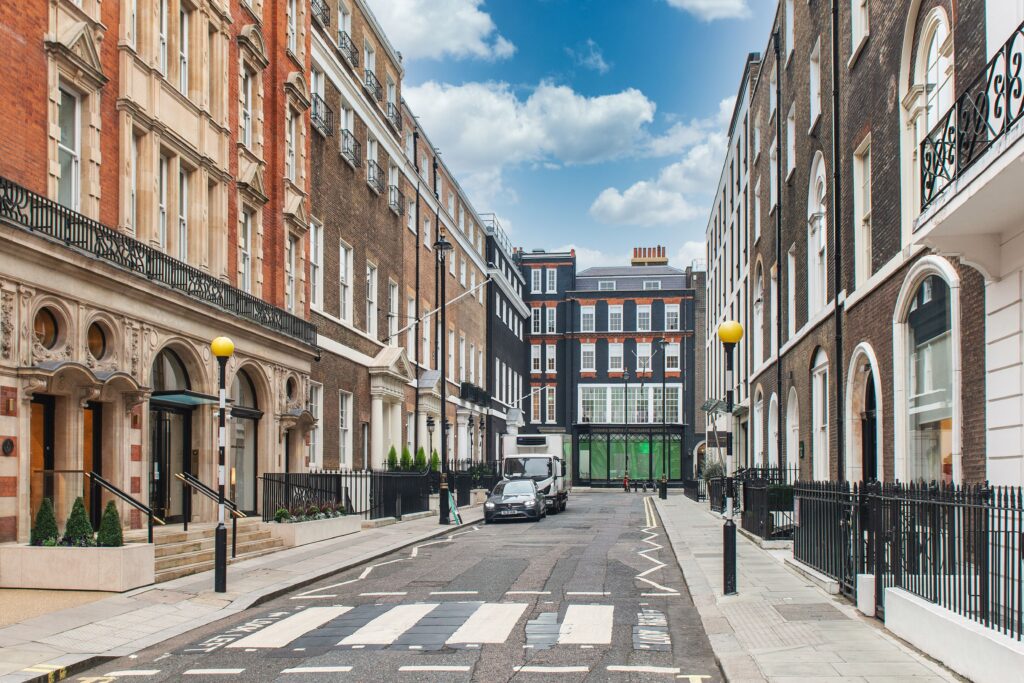 The adjoining first floor dining room, which has a carved wood chimneypiece and built-in bookcases surmounted by busts of Alexander the Great, Caesar Augustus and Marcus Aurelius became Gucci’s main meeting room and boardroom, where lunches and dinners hosted by Tom Ford and Domenico De Sole were served for guests including French billionaire tycoon François Pinault, Gucci’s general counsel Allan Tuttle and important editors and journalists from the world’s media. 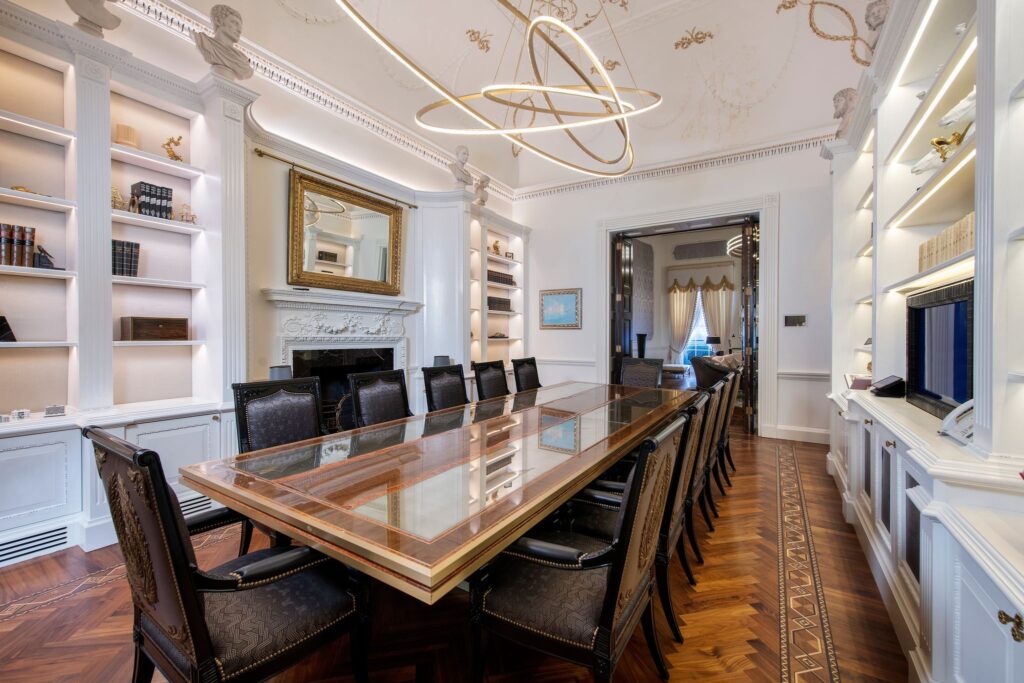 It was from this penthouse suite in 1999 that De Sole acquired Yves Saint Laurent and folded it into Gucci group and, in the same year, where he fought off the famous hostile takeover bid by Bernald Arnault of LVMH. It is from the penthouse suite that De Sole is said to have held phone conversations with LVMH’s Pierre Godé and Yves Carcelle, trusted aides of Arnault, to see off the takeover bid. 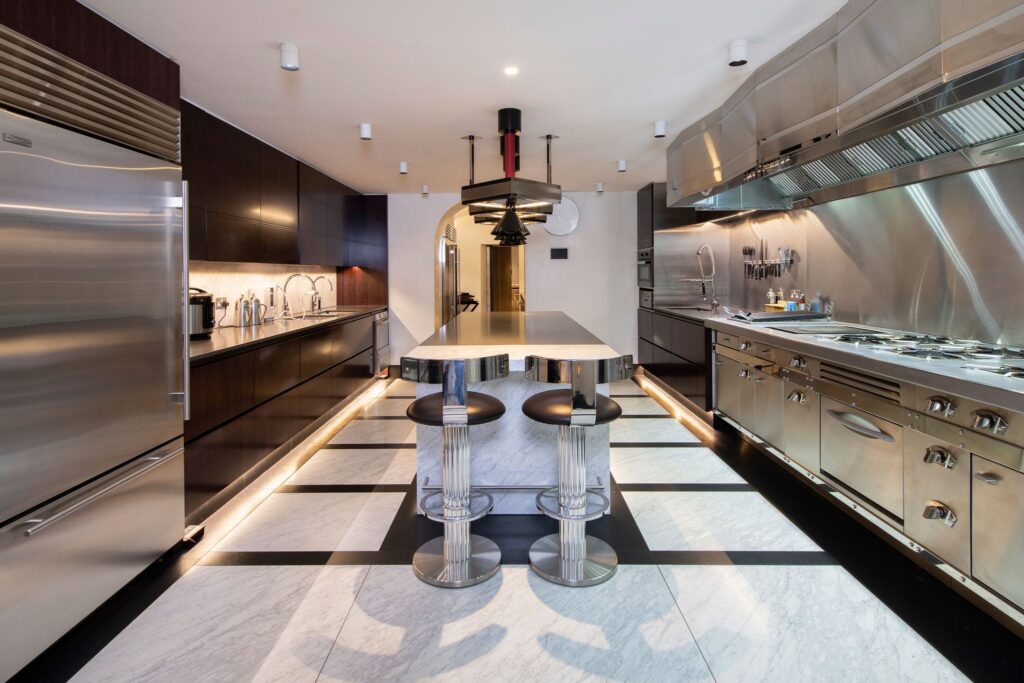 The mansion’s second and third floors provided offices for Gucci CFO Bob Singer,  seven staff employed in the brand’s PR and image department, and offices for the Gucci human resources, legal and IT departments.

In 2003 French Billionaire François Pinault took control of Gucci and this led in April 2004 to Tom Ford and Domenico De Sole departing Gucci. In June 2010 the then Gucci CEO Robert Polet decided to relocate Gucci’s global HQ from Grafton Street to Cadempino in Switzerland, thereby ending the Gucci role in the mansion’s history. 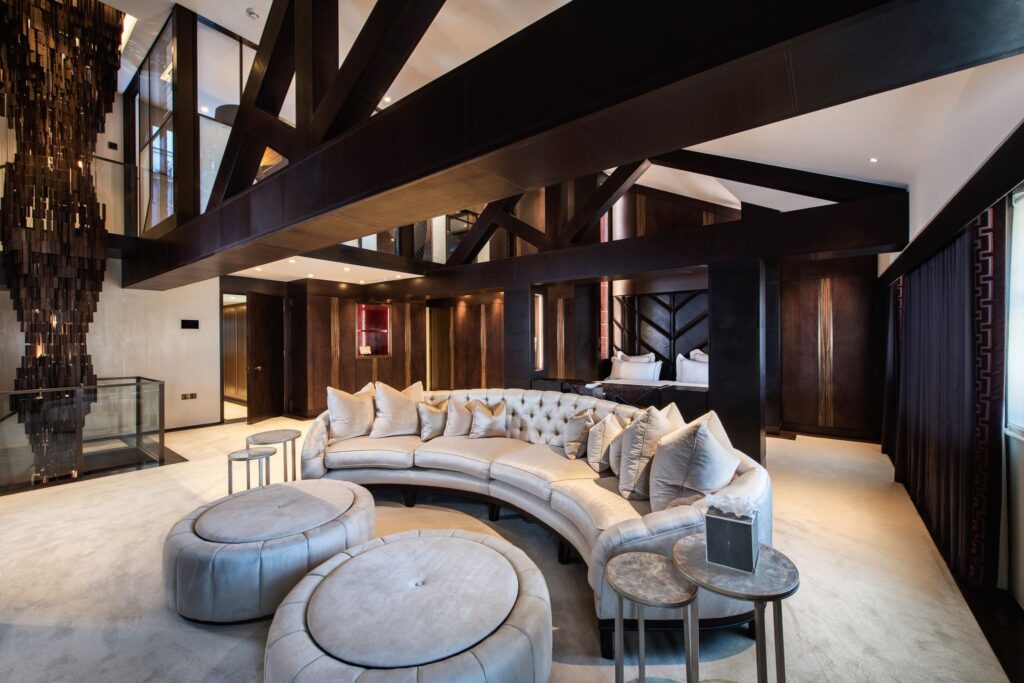 Following Gucci’s departure the spectacular building was converted back into a house under designs devised by RIBA award winning architects Donald Insall Associates, who oversaw the restoration of Windsor Castle for the Royal Household. Now, for the first time since its lavish refurbishment, the mansion on Grafton Street seeks new residents who like Gucci will have the privilege of calling one of the finest residences in Mayfair their London home. 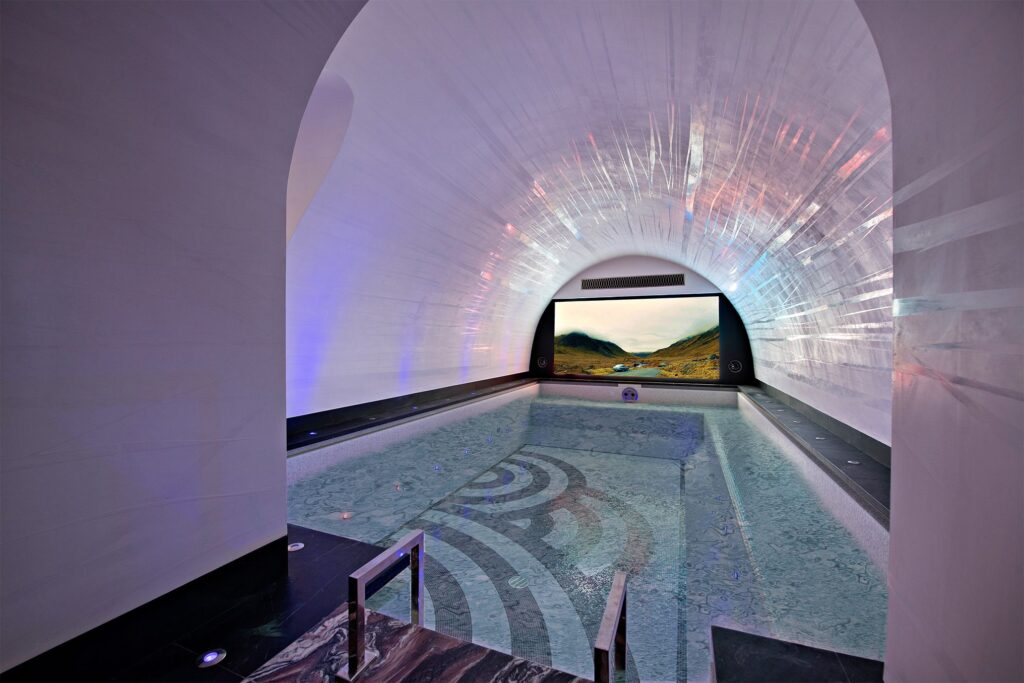 The entertainment and leisure facilities are located across the basement and lower ground floors. There is a gymnasium, a private cinema and a health spa with swimming pool, marble lined plunge pool, mosaic lined steam room and a Scandinavian style sauna. The basement garage offers secure parking for two cars. 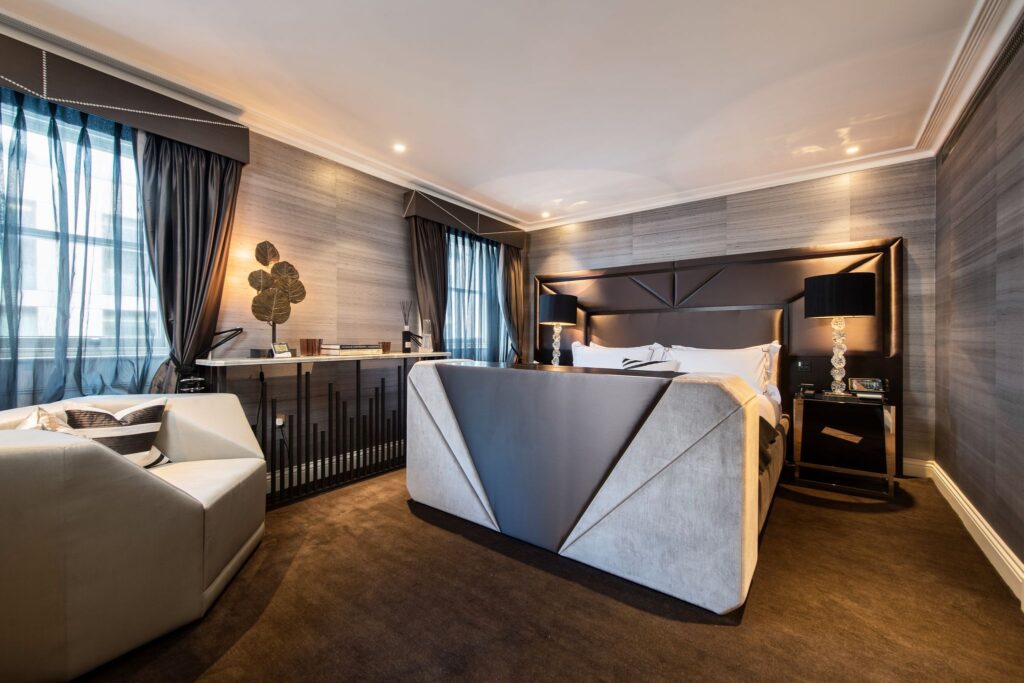 “Immaculately dressed this turn-key mansion with its two floors of entertainment and leisure facilities is perfect for a family who like Gucci want a palatial residence in the heart of Mayfair.”

The Gucci Mansion on Grafton Street in London’s Mayfair, the spectacular Grade I listed …

The latest research by Revolution Brokers reveals that bridging loan lending has increased by 30% since the start of the pandemic, as UK homebuyers work hard to stay afloat in …