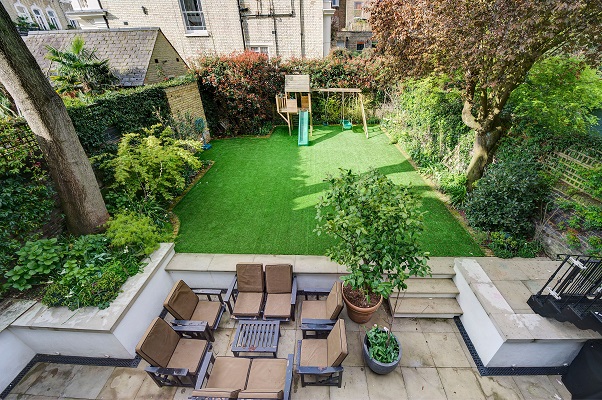 An elegant family house in The Little Boltons in South-West Kensington, which was originally the London home of His Highness Prince Victor Jay Duleep Singh (1866-1918), the exiled son of the last Maharaja of Lahore, is for sale the five bedroom 5,613 sq.ft. semi-detached villa providing two large roof terraces and a 52ft rear garden. The former London home of the exiled Crown Prince of Lahore has two formal reception rooms, an informal family/media room, a family kitchen and breakfast room, five bedrooms, including the sumptuous principal bedroom suite, a gymnasium and two staff bedrooms/studios. The Little Boltons house was originally built by builder John Spicer between 1866-68, designed by architect George Godwin junior, under the auspices of Robert Gunter, of the wealthy confectionery family who had invested their fortune in luxury property development.  The large Italianiate-style villa has a three storey brick façade with white pillared entrance portico, large stucco bay and tall windows with stucco detailing. Spicer was chosen to build the houses in The Little Boltons because he had constructed the grandest houses in Pimlico for the Grosvenor family. Upon completion in late 1868 the house in The Little Boltons was purchased by the quasi-Government owned East India Company, and registered as an investment property to be leased for rental income. The East India Company leased the property for a peppercorn rent to the Duleep Singh family, the former Royal Maharajas of Lahore, who since the 1840s had been exiled in Britain when the East India Company and the British Raj took over their state. Born on the 10th July 1866 at a 99 Onslow Square in London (his godmother was Queen Victoria), and educated at Eton College and Cambridge University, Prince Victor Jay Duleep Singh was the son of Sir Duleep Singh, the last Maharaja of Lahore (1838-1893), who in 1849 had been deposed and sent into exile in London. The East India Company providing the displaced Royal family with “grace-and-favour” London homes which the East India Company acquired in The Boltons, Wimbledon and Roehampton, leased to the Indian Royals at a peppercorn rent. The family also had use of a 17,000 acre country house, Elveden Hall, in Suffolk. On 4th January 1898, the handsome and dashing Prince Victor Jay Duleep Singh married Lady Anne Coventry, the daughter of the 9th Earl of Coventy. The mixed-race marriage caused a sensation in London high society as it was the first time that an Indian Royal had married an English noblewoman. Initially both families resisted the match, but it was made possible due to the intervention and support of Prince Victor’s gambling buddy, Edward, Prince of Wales (subsequently King Edward VII). The wedding took place in St Peter’s Church in Eaton Square, attended by the Prince of Wales and with Queen Victoria also represented. The British authorities leased The Little Boltons house to the newly married couple as their new marital home. The 1871 Census showed the house registered under East India Company ownership and staffed by a butler, two maids, a governess (for English language lessons) and a gardener. Prince Victor also rented Hockwold Hall in Brandon, Norfolk. Prince Victor and his wife socialised with friends who included George Herbert, the 5th Earl of Carnarvon, of Tutankhamun fame, and his wife Almina, the Rothschild heiress. The couple also enjoyed travelling overseas and in 1898 for their honeymoon they visited Cairo and the pyramids with Lord and Lady Carnarvon, and they also spent long periods of time in Paris and Monaco. Prince Victor loved the high-life including gambling, horse racing and partying at Claridges in Mayfair and the Hotel de Paris in Monte Carlo (Claridges was a favourite haunt since the Regal family had first stayed there whilst their new London homes were being prepared for them). Despite his “grace-and-favour” Little Boltons home and an annual allowance of £8,250 and his wife’s income of £2,500 per year Prince Victor was declared bankrupt on 4th September 1902 with debts totaling £117,900 – a fortune at that time. The Prince and Princess spent WWI in Monaco where the Prince died, aged just 51, on 7th June 1918 at the Hotel de Paris in Monte Carlo. His widow, Anne, Her Highness Princess Duleep Singh of Lahore, returned to London and continued to have use of The Little Boltons house until her death aged 82 on 2nd July 1956. The former “grace-and-favour” property was then sold and went into private ownership and in 2010 it was refurbished and modernised, including a stylish and contemporary extension to the lower ground floor level, creating a large open space with full height glazing opening onto the rear garden. The family house now provides five levels of modern living space over lower ground/garden floor, raised ground and three upper floors. On the raised ground there is a large entrance hall with timber flooring and high ceiling, giving access to the front drawing room with large bay window and to the rear of the house the kitchen and breakfast room and separate dining room. The modern family kitchen has polished green and brushed-steel units with two sets of French doors opening onto the first floor roofterrace. The adjoining dining room also opens onto the roofterrace. On the lower ground floor there is a large open plan living space providing a family room, media room and informal dining area, bordered by floor-to-ceiling glass sliding walls which open onto the large paved terrace and rear garden. This large open plan space gives access to the gymnasium, with the staff quarters to the front of the lower ground floor completing the accommodation on this level. The entire first floor provides the principal bedroom suite with the main bedroom benefitting from access to a private balcony and terrace, complete with a walk-in dressing room, opening onto two balconies and the main bathroom. During the Victorian and Edwardian eras when Prince and Princess Victor Duleep Singh lived at the house this floor provided them with two VIP bedroom suites, the Royals sleeping separately and meeting for breakfast together on the rear bedroom terrace. On the upper floors there are four further bedrooms, two with ensuite bathrooms and two sharing a main bathroom. Jeremy Gee, Managing Director of Beauchamp Estates said, “This substantial former “grace-and”favour” home of the exiled Crown Prince of Lahore has been designed to provide excellent proportions and benefits from high ceilings, large living spaces and a 52 ft rear garden. It is located in one of south-west Kensington’s most sought after residential addresses.”