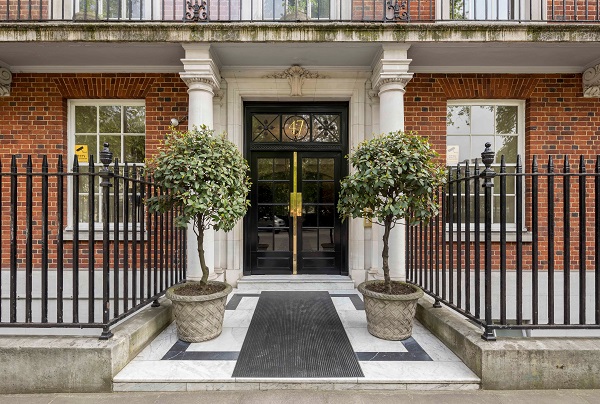 The buoyancy in Central London’s ultra-prime residential property market continues apace with the latest mega-deal understood to be a Middle Eastern buyer who has purchased the famous £25,000,000 (asking price) Onassis residence at 47 Grosvenor Square in Mayfair. It is understood that the deal, listed on Lonres at £18,600,000, is the highest price achieved for a single unmodernised apartment in Mayfair this year, brokered in less than 24 hours by leading Mayfair agent Wetherell, involving the head of the firm Executive Chairman Peter Wetherell. The last time a property deal in Mayfair for a home priced above £10,000,000 was agreed and implemented in less than 24 hours was over 10 years ago during the era before the introduction of Stamp Duty. During the 1960s and 1970s the Onassis residence was used as a London pied-a-terre by Artemis Onassis, the sister of Aristotle Onassis, Christina Onassis, Artemis’s niece, Jackie Kennedy Onassis and Princess Lee Radziwill (Jackie’s sister). The interest in the property has been captivated by the glamorous history of the residence and also the potential to restore the property to its former glory; once restored it could be worth up to £30,000,000. The Ambassadorial 1st floor apartment at 47 Grosvenor Square provides over 5,000 sqft of lateral living space with a 60+ foot balcony and south facing terrace. It was formerly the London home of Artemis Onassis, sister of billionaire Aristotle, and this deal is the first time in over 28 years that the historic Greek billionaire family’s Mayfair property has been brought to market and sold. The palatial neo-Georgian apartment building at 47 Grosvenor Square was built in 1938-1939 and the apartment’s first owner, from 1946, was Sir John Anderson, 1st Viscount Waverley (1882-1958) who was Chairman of the Royal Opera House and patron of legendry opera singer Maria Callas (1923-1977). When approached, Wetherell declined to comment on the buyer or provide details of the deal. However, when asked about the deal being listed on Lonres Peter Wetherell conceded the following; Peter Wetherell, Founder & Chairman of Wetherell said, “The landmark sale of the Ambassadorial 5,000 sqft Onassis residence at 47 Grosvenor Square, in a £18.6 million deal done in under 24 hours, shows the continuing appeal by global wealth for trophy London properties. “Ultra-high-net-worth buyers from around the world are currently wanting to acquire trophy properties of this type in Mayfair which will soon be in short supply. “This is due to Westminster City Council’s new planning brief, which will prohibit the building of new homes of over £2,155 sqft (200 square metres). These planning changes mean that the pipeline supply of these type of large Ambassadorial residences will diminish over time.” Another estate agent involved in finding buyers for the residence at 47 Grosvenor Square was Beauchamp Estates. When approached regarding the deal and the listing on Lonres Managing Director Jeremy Gee conceded the following, Jeremy Gee, Managing Director of Beauchamp Estates said, “The £18.6 million sale of the former Onassis residence in Grosvenor Square in Mayfair shows that global high-net-worth buyers still see Prime London luxury property as a good long-term investment. “Beauchamp Estates and Wetherell were both fielding buyers and offers for this Mayfair residence, with an offer via Peter Wetherell being accepted. “The deal is cloaked in secrecy but we understand that the apartment has sold to a Middle East buyer, a Saudi billionaire buying for his daughter.

“It is interesting that since COVID-19 all the ultra-prime deals have either been for houses or for full-floor apartments like this one or penthouses where buyers can carefully control access and don’t have to share access to their homes with neighbours.”