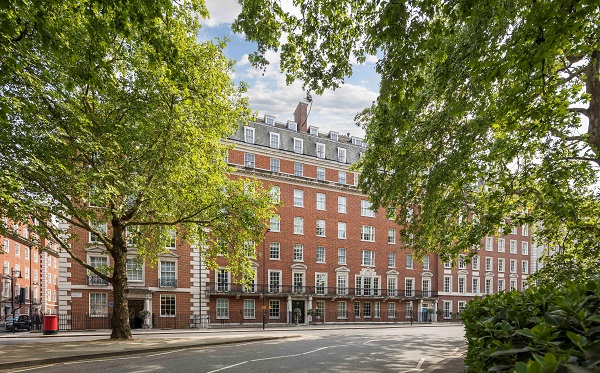 Former luxury London home of Onassis on the market for £25m

An Ambassadorial 1st floor apartment at 47 Grosvenor Square providing 5,006 sqft (465.24 sqm) of lateral living space with a 63 foot balcony and south facing terrace, formerly the London home of Artemis Onassis, sister of billionaire Aristotle, is the finest residence and refurbishment opportunity in the world-renowned square and is being brought to market by sole agent Wetherell for the first time in 28-years. One of the largest and grandest apartments in Grosvenor Square, the 1st floor five-bedroom apartment at 47 Grosvenor Square has an illustrious history which combines aristocracy, wealth, glamour and celebrity. The palatial brick and stone apartment building at 47 Grosvenor Square was built in 1938-1939 in a neo-Georgian style to designs by Detmar Blow, Estates Manager to the Duke of Westminster, and Fenand Billerey, the French Beaux-Arts architect. The internal fit out was disrupted by WWII, so it was not until after 1945 that the building was fully completed, allowing residents to occupy the apartments. The apartment’s first owner was Sir John Anderson, 1st Viscount Waverley (1882-1958), who was Winston Churchill’s wartime Home Secretary and later Chancellor of the Exchequer. In 1946 Sir John moved into his new Grosvenor Square residence and in the same year took up his post-war roles as Chairman of the Port of London Authority and Chairman of the Royal Opera House. It was Sir John who helped welcome legendry opera singer Maria Callas (1923-1977) to her first performance at the Royal Opera House in 1952 and he championed her following visits to the Covent Garden opera house in 1953, 1957 and 1958. Maria Callas first met Greek billionaire Aristotle Onassis (1906-1975) in 1957 and the two started a famous love affair that continued for over 11-years. Given the links between opera patron Sir John, Callas and Onassis it is perhaps no coincidence that when Sir John’s Grosvenor Square residence became available the Onassis family acquired it. During the 1960s and 1970s the Ambassadorial 1st floor apartment at 47 Grosvenor Square served as the London home of Artemis Onassis (1902-1981), the sister of Aristotle Onassis, and her husband Theodore Garoufalidis (1898-1978), who was President of Olympic Airways, the Greek national carrier which between 1956 to 1974 was owned by Aristotle Onassis. Under Aristotle and Theodore Olympic Airways was given a luxury makeover with Pierre Cardin designed uniforms for the staff and gold cutlery and candelabra for first class passengers. On 21 October 1968 Aristotle Onassis married Jackie Kennedy with Artemis Onassis acted as her sponsor at the wedding. In 1975 Jackie’s daughter Caroline Kennedy was studying in London and staying at the Campden Hill Square home of MP Sir Hugh Fraser, a family friend, when an IRA bomb placed under Sir Hugh’s car exploded. Caroline was evacuated and stayed for several days at the apartment at 47 Grosvenor Square, the American Ambassador advising she would be safe based so close to the Embassy. Fast forward to today and the apartment at 47 Grosvenor Square has been significantly modernised and altered since the days of Viscount Waverley and Artemis Onassis, however there are still features that serve as a reminder that the capacious living spaces once entertained Christina, Lee and and Jackie O.

The large reception hall gives access to the 32ft main reception room, formal dining room and study, all opening onto the ornamental balcony overlooking Grosvenor Square. This trio provides approximately 2,000 sqft of reception space facing over the gardens of Grosvenor Square. The library has full height glazing, with sliding doors opening onto the private terrace overlooking the south facing rear façade of the apartment building. The large family kitchen and breakfast room has a central island with breakfast bar, complete with a separate cocktail bar and utility room. The size of a conventional apartment, the magnificent master bedroom suite has large His and Her walk-in dressing rooms and His and Her master bathrooms. There is also a principal guest suite with walk-in dressing room and ensuite bathroom. There are three further bedrooms, one with an ensuite and the others sharing a guest bathroom. The apartment building has a grand ground floor entrance foyer with two passenger lifts and 24-hour uniformed porterage. Peter Wetherell, Chief Executive of Wetherell said, “With its iconic address, balcony and terrace and garden square views this expansive Mayfair residence at 47 Grosvenor Square is the finest apartment in Grosvenor Square. This is a trophy property, which would serve as an excellent long-term investment and main London residence. The apartment would benefit from a refurbishment to provide the latest specification and interior dressing, but such a makeover could add an additional £1,000 per sqft to the value of the property. Once dominated by diplomatic buildings, Grosvenor Square is currently being returned to its residential origins, with buildings being converted into luxury apartments and new hotels, this transformation will make the square the best residential address in central London.” Wetherell highlight that Grosvenor Square is currently benefitting from a luxury makeover. The former Canadian Embassy and US Naval Building are being transformed back into luxury apartment buildings and the former US Embassy is set to become a 5-star Rosewood Hotel with cafes and luxury boutiques. The central garden square is also set to be transformed with a new landscaping scheme and enhanced public realm, with the formerly closed area in front of the US Embassy being transformed into a magnificent public piazza fronting onto the new Rosewood Hotel.

Wetherell said, “Grosvenor Square is seeing its biggest transformation in a century. The buildings around the square are either returning to their residential origins or being transformed into new luxury hotels, this major step change which will help to enhance residential capital values in the square and add to the desirability of this already highly coveted world-renowned address. Given this wider context, the apartment at 47 Grosvenor Square has the potential to become one of the finest residences in central London.”