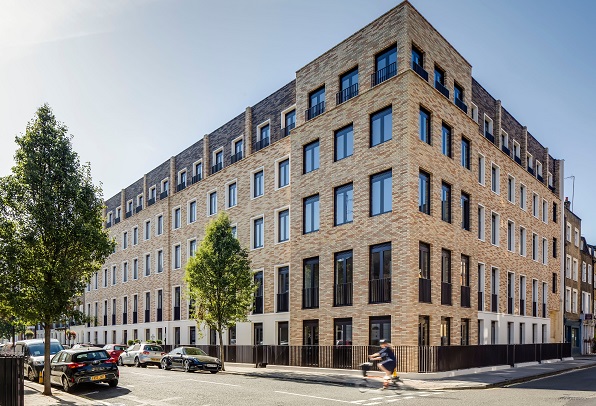 Assembled using over 116,000 York handmade bricks of contrasting colours, the new £92m landmark building at One Molyneux Street, by developer Coronado, providing 32 luxury one, two and three bedroom apartments and duplexes, is the largest and most expensive traditional-built brick building to be constructed in Marylebone and London’s West End since the Edwardian era. The Marylebone development and street is named after a long lost grand brick townhouse said to be owned by Vice-Admiral Molyneux Shuldham (1717-1798) who was first Governor of Newfoundland and later Commander-in-Chief of British Naval forces in the Americas and North Atlantic. Previously the One Molyneux Street site was occupied by Elliott House, an unsightly Metropolitan Police Residence built in 1939, used to house police used to combat the famous Brixton and Poll Tax riots of the Thatcher years. Developer Coronado reveal that each of the 116,000 bricks are not standard bricks. Each are bespoke, handmade bricks, 60mm thick and 300mm long, costing over £2 each; this can be compared to the standard 75mm and 225mm of a conventional mass-produced £1.10p brick. Given the £92m value of the building, each brick laid by the army of bricklayers in the completed scheme is now worth £793, making them arguably the most expensive bricks ever erected in London’s West End. There was a push to finish the development before the Brexit deadline of the 31 October 2019. Peter Wetherell, Chief Executive of Wetherell says: “there’s been a push to get this magnificent brick building at One Molyneux Street ready before the 31 October Brexit deadline, as the traditional build landmark property has been created by artisans who include many craftsmen from the EU. We may never see a building like this in London again if a ‘hard Brexit’ means we can’t attract the skilled traditional workmen and also source at reasonable prices high quality specification items from the EU needed to build them. We could end up reliant on factory prefab or concrete, glass and render panelled structures and that would be a huge loss to London.” Of the bricklayers, artisans and other workforce who worked on One Molyneux Street 80% are European and suppliers for the development are also sourced from the finest providers from the EU including France (internal insulation/cladding), Germany (kitchens, wardrobes and lighting) and Italy (porcelain tiles) and in addition the contractor is from Ireland. To compliment the traditional brick façade the building has eco-chic ‘Green’ credentials. The living roof, with Sedum plants and Photovoltaic panels, is complemented by the secure bicycle storage and electric car charging points. Peter Wetherell, Founder & Chief Executive of Wetherell said, “Assembled using over 116,000 York handmade bricks of contrasting colours, the new £92m building at One Molyneux Street by Coronado is the largest traditional-built brick building to be constructed in Marylebone and London’s West End since the Edwardian era. Given the completed value of the building, each brick laid by the army of bricklayers is now worth £793, making them arguably the most expensive bricks ever erected in London’s West End.” Peter added, “This landmark brick development blends in beautifully with surrounding Georgian architecture and its such a refreshing change from seeing factory prefab schemes and slabs of steel and glass, the brick finish is much more in keeping with Marylebone.” Peter Preedy, Director of Residential Development JLL said, “JLL are delighted to bring One Molyneux Street to the market. This is the first new development of any scale to reach completion in this thriving part of Marylebone and is representative of the neighbourhood, with exquisite detailing both internally and externally.  We are already experiencing very strong interest and are looking forward to showing potential buyers the newly opened show apartment.”