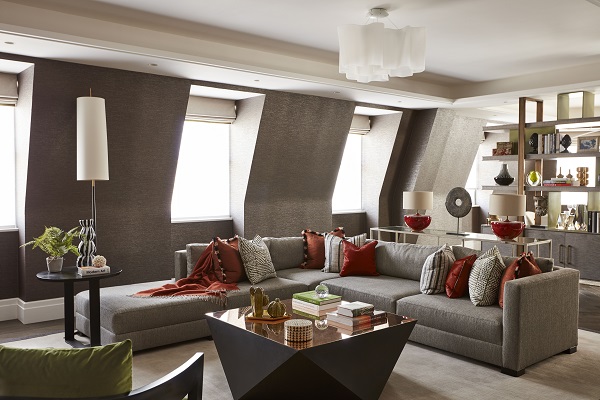 Offering multiple prestigious connections, 1 Queen Anne’s Gate in St James’s Park, a development by Aperture Group Management, is London’s most refined residential development, consisting of a grand historic building, originally the residence of the British Foreign Secretary and then the headquarters of Holland, Hannen & Cubitts, now newly built behind the historic façade to provide 27 one, two and three bedroom lateral and duplex apartments and a five bedroom penthouse.

Behind the historic Grade II listed façade, the new interiors of 1 Queen Anne’s Gate have been created by an extraordinary and highly special collaboration with LINLEY, the design house founded by David Armstrong-Jones, 2nd Earl of Snowdon, and architects PDP London. The partnership has devised the apartment layouts and their bespoke specification; alongside the communal areas and dressed Show Homes.

LINLEY and PDP London also designed the interiors of the basement amenity floor which provides over 3,000 sqft of space including a fully equipped gymnasium, spa, cinema, club lounge, dining/conference room and business centre. 1 Queen Anne’s Gate is complete with an elegant entrance foyer with hotel-like concierge and a car-parking complex.

The building at 1 Queen Anne’s Gate has an illustrious history. It was originally three separate townhouses, with ancillary buildings behind, one townhouse constructed in 1776 and the other two in the 1850s, creating a grand neo-Georgian façade.

From 1900 the buildings served as the official London residence and adjacent offices for the British Foreign Secretary, a role held until 1928 when the residence was relocated to No.1 Carlton Gardens. Sir Edward Grey (1862-1933) served as Foreign Secretary between 1905 to 1916 and lived at Queen Anne’s Gate during this period, now commemorated by a blue plaque on the building’s façade.

In 1930-1931 the townhouses were amalgamated and remodelled to create the current five storey Edwardian building, the property serving as the headquarters of the legendry construction firm Holland, Hannen & Cubitts, which was founded in 1824 by brothers Thomas Cubitt, William Cubitt and Lewis Cubitt.

As part of the remodeling the separate townhouse porticos were replaced by a single central Georgian style entrance, above which was the Crest of Arms for Holland, Hannen & Cubitts, the doorcase and crest carved in 1931 by artist George Alexander. This elegant doorway with its crest of arms now serves as the entrance to the new apartment building.

During the 1930s the firm was led by Chairman Lewis Cubitt Junior, who was the son of co-founder Lewis Cubitt. Operating from 1 Queen Anne’s Gate the company built South Africa House in 1933 and the Senate Building in 1937. During WWII the firm was asked by Winston Churchill to help build the floating Mulberry Harbours used for the 1944 D-Day Landings.

In 1949 at the age of just 25 Henry Cubitt (later the 4th Baron Ashcombe), a descendant of co-founder Thomas Cubitt, joined the firm and rose to become Chairman. Henry (1924-2013) was also the uncle and godfather of Camilla Shand (now HRH The Duchess of Cornwall) whose mother was Rosalind Cubitt, another descendant of Thomas Cubitt.

Under Henry Cubitt the business based at 1 Queen Anne’s Gate built the Royal Festival Hall, completed in 1951, the Roxburgh Dam in New Zealand in 1956, New Zealand House in 1961, Heathrow Airport buildings in 1963 and the Le Cartier Apartments in Montreal in 1965, at the time the tallest residential skyscraper in the Commonwealth. The young Camilla Shand has fondly recalled visiting her uncle’s offices at 1 Queen Anne Gate and through his connections Camilla landed a job at interior design firm Colefax & Fowler.

In 1976 Holland Hannen & Cubbitts was acquired by Tarmac resulting in 1 Queens Anne’s Gate being sold, becoming multi-let offices up until 2014, when planning was started to convert the building and ancillary properties behind into the new residential scheme now known as No.1 Queen Anne’s Gate.

There are 27 lateral and duplex apartments and a five bedroom penthouse. The two and three bedroom duplexes are 1,630 sqft to 2,772sqft in size located across the lower and raised ground floors. The duplexes have double volume reception rooms and family kitchen/breakfast rooms on the upper levels, and bedroom suites below. The master bedroom suites have a walk-in dressing room and master bathroom, with the three bedroom duplexes benefitting from a separate study/home office.

The one, two and three bedroom lateral apartments are 747 sqft up to 3,107 sqft in size located on the first to fourth upper floors. All the lateral residences have a spacious entrance hall, generous reception rooms and separate family kitchen/breakfast rooms. The master bedroom suites have walk-in dressing rooms and further bedrooms all have ensuites.

The five bedroom penthouse located on the top fifth floor has large reception rooms, VIP bedroom suites and private rooftop terraces. The trophy home is the most outstanding penthouse to be created in St James’s Park and the wider Westminster district.

All the apartments provide large floorplates, tall sash windows and generous ceiling heights, The living areas have coffered ceilings and the larger apartments have spacious entrance halls with double doors leading into a main reception rooms.

The residents-only amenity facility is accessed via a private entrance lobby. LINLEY has dressed the club lounge like an exclusive private-member’s club with sofas, feature chairs and coffee tables. There is also a private cinema/screening room, a 20 seater dining/conference room with separate catering kitchen, a business centre and a  gymnasium with sauna, steam room, therapy room and changing/shower facilities. 1 Queen Anne’s Gate is complete with secure automated underground car parking.

David Armstrong-Jones who was styled as Viscount Linley until 2017 and known professionally as David Linley founded LINLEY in 1985. World renowned, LINLEY creates bespoke furniture, luxury gifts and accessories, and undertakes interior design that showcases the finest in British design and craftsmanship.

David Armstrong-Jones, 2nd Earl of Snowdon, says: “For 35 years our meticulous attention to detail has been unrivalled and we strive for superlative quality. We have designed every aspect of this project, from optimising layouts and arranging the living spaces, down to the finest details of the soft furnishings.”

Nina Coulter, Head of London Residential Development at Savills said, “1 Queen Anne’s Gate is one of the most prestigious luxury development launches in London this year. This grand heritage building, with its illustrious history, has been skillfully transformed to provide unique trophy homes designed through a special collaboration with LINLEY. 1 Queen Anne’s Gate provides discerning buyers a not-to-be-repeated opportunity to buy a slice of British history offering the very best of British craftsmanship.”

Jeremy Gee, Managing Director of Beauchamp Estates said, “Offering competitive £ per sqft values the new homes at 1 Queen Anne’s Gate provide buyers with “luxury-value” compared with adjacent addresses such as Mayfair and Belgravia where equivalent new homes prices are significantly higher. It is an advantageous time to buy in this prime address since with the forthcoming launch of Crossrail property values in St James’s Park and the wider West End are anticipated to rise by up to 25% over the five years after the new line opens.”

There are two dressed Show Homes and the amenity facility, designed by LINLEY, available for purchasers to view. Lateral apartments are priced from £1.670m up to £9.15m and duplexes priced from £3.35m to £5.25m. For further information contact joint sole agents