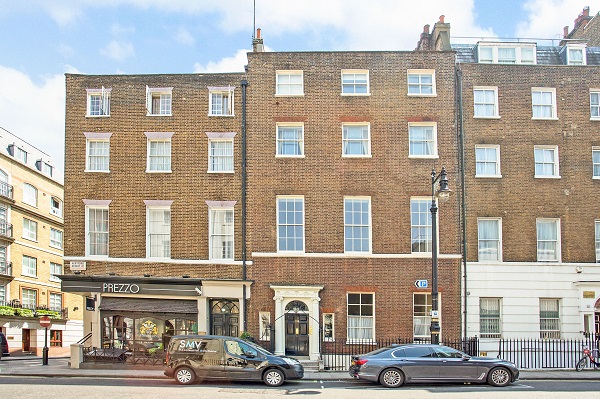 Offering 1,691 sq. ft. of stunning living space, the First Floor apartment comprises a grand double reception room with 15 ft. ceilings, a 30 ft. long kitchen and two-bedrooms for £1,900 per week. On the second floor of the building is the Second Floor apartment offering 1,320 sq. ft. of living space inclusive of two bedrooms, a spacious reception room and a separate kitchen, available for £1,295 per week. 18 Herford Street was originally part of the development of the south side of Hertford Street by the elder Henry Holland, a successful builder, along with his son Henry Holland Jr, who went on to become a world-renowned architect to the Royal family. Henry Holland Jr was a founding member in 1971 of the Architects Club and was responsible for designing some of the most fashionable areas in London, including parts of Knightsbridge and Chelsea such as Sloane Street and Sloane Square. Holland was also responsible for the remodelling of Carlton House, commissioned by the Prince of Wales, which was later known as his most significant work. Upon entering the apartment, residents will be met with an expansive kitchen designed in a monochromatic style. The 30 ft. long space features hard wood floors, complementing the chic black and white design of the kitchen. Offering Gaggenau appliances and a bespoke Arabescato marble island, the space boasts ultra-modern style while maintaining some traditional features like an original fireplace in the centre of the kitchen. White gloss cabinets maintain the monochromatic theme, together with the black and white feature wall that adds a distinct style to the room. Two large doors open out into a sprawling reception room, graced with 15 ft. ceilings and three large windows offering unprecedented views of Hertford Street whilst providing the room with an abundance of light. Original cornices span the ceilings of the room, while a second original fireplace adds a homely atmosphere to such an open space. The reception room also features a Micheal Anastassiades chandelier. From the kitchen, a handcrafted oak trimmed staircase leads up to the property’s master bedroom, where residents will benefit from a walk-in-wardrobe and an en-suite bathroom with high gloss sycamore veneer panelling, evoking the sleek interiors of a premium yacht. The en-suite Vola bathroom is fit with bespoke limestone slab work and modern steel structural work. The property further features a second double bedroom with an en-suite bathroom, also with the high gloss sycamore veneer panelling. The Second Floor apartment of 18 Hertford Street is a bright and spacious flat that offers two bedrooms, a reception and dining room and a separate, fully equipped kitchen. The property’s interiors coordinate with the period façade of the building, with original cornicing and fireplaces throughout. The property’s reception and dining area epitomises traditional elegance. The large room could serve as the ideal entertaining space, with white couches pairing beautifully with the white silk carpet that covers the floor. Two large windows give the room an abundance of light, leaving the space with a bright and airy atmosphere. The fully fitted kitchen is fit with chic wooden cabinets that compliment the pastel blue tiled splash backs. The property’s master bedroom provides residents with comfort and style, three large windows provide views of Hertford Street, while the en-suite bathroom is fit with marble interiors. The Second Floor apartment is available to rent for £1,295 per week. Peter Wetherell, Chief Executive of Wetherell said, “Royal architect Henry Holland is celebrated for his grand designs and the original townhouse at 18 Hertford Street is no exception. With two apartments available as luxury letting opportunites, one that has striking contemporary interior design and the other that embodies traditional elegance, Wetherell are proud to have such fantastic lateral homes available. The property’s rich heritage and chic interiors leaves us anticipating high demand for these beautifully preserved homes, both hidden gems in the surrounding area.” Hertford Street is a prime Mayfair street, just moments away from the exclusive shops of Oxford Street and Regent Street, where residents can find some of the finest, five-star restaurants in London. Running from Curzon Street to Park Lane, Hertford Street is ideally located for use of all Mayfair amenities, as well as the green spaces of Hyde Park.