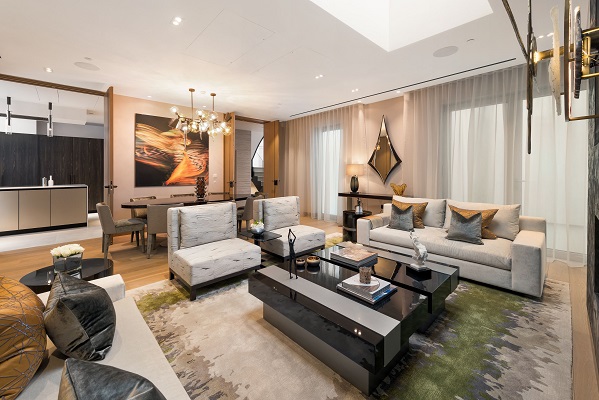 Inspired by La Maison de Verre in Paris, two magnificent glass houses, designed so that they can be configured into a single glass mansion providing 13,583 sqft of luxurious living space.

This includes a 1,251 sqft roof garden, a 226 sqft garden patio and four car garage; are situated behind a private gated courtyard in Mayfair’s Down Street Mews; located on the 0.6 acre site of Italian Count Dino Grandi’s “lost” mansion, of which only the black-brick Edwardian stables survive. For sale via joint sole agents Beauchamp Estates and Central Estates. Built and ready for immediate occupation the two adjoining brand new houses were created by a Mayfair developer and Richard McCarthy of architectural practice Scott Brownrigg, the duo’s stunning four-storey clear and frosted glass facades recall Philippe Starck’s St Martin’s Lane Hotel, with their design inspired by the iconic La Maison de Verre (House of Glass), built in 1932 in the 7th Arrondissement of Paris, a milestone of modern architecture. Access to the houses is via a gated entrance which is located off the mews courtyard, which is protected and hidden behind a main set of gates fronting Down Street, providing the Down Street Mews property with exceptional security and privacy. Down Street Mews was originally occupied by a black brick Edwardian mansion and stables, built in 1920, accessed by a gated carriage driveway off Down Street. In August 1932 the mansion became the London home of Count Dino Grandi (1895-1988), Benito Mussolini’s Ambassador to the UK. At his mansion Count Grandi entertained Lady Alexandra Curzon (his mistress and the wife of “Fruity” Metcalfe, equerry to Edward, Prince of Wales) and other Italophile guests including Diana Mitford, “Fruity” Metcalfe, Lord Lloyd, Lloyd George and Wallis Simpson. In July 1939 Count Grandi was recalled to Rome by Mussolini who was under pressure from Adolf Hitler, enraged by Grandi’s attempts to deliver peace between Italy and Britain. In 1940 a Luftwaffe bomb destroyed Grandi’s Down Street Mews mansion, with only the stables by the entrance courtyard surviving; in 1943 Grandi got his revenge, triggering the coup which overthrew Mussolini and started peace negotiations with the Allies. After 1945 Grandi’s mansion site off Down Street Mews was divided with the front portion, including the courtyard and surviving stables, transformed into commercial premises, with the remainder to the rear turned into post-war housing. Five years ago a Mayfair developer acquired the commercial premises fronting onto the mews courtyard with a vision of returning the site to its residential origins. Now after planning and a three year construction programme, including a basement dig to a depth of 30 ft, to create the carpark, below ground leisure floors and deep bore energy extraction piles, the new glass houses at Down Street Mews are finished and ready for immediate occupation. In both houses the reception and family rooms all benefit from two sets of glazed Juliette balconies and are finished with solid Oak parquet floors and bespoke joinery. The fully fitted family kitchen and breakfast rooms have a central island and state-of-the-art integrated appliances. The study/home office in each house has a glazed Juliette balcony and is designed to Grade A office specification, an ideal base for global communications and running a business either full or part-time. The principal bedroom suites have a walk-in dressing room with mirror-lined built in wardrobes and a marble clad main bathroom. The other main guest bedrooms have luxurious marble clad ensuite bathrooms. Both houses have an entire floor dedicated to a luxurious private spa. In the first house the spa has a swimming pool, 8.15m long, 1.35m deep, with underwater LED lights and a Jetswim wave machine exerciser. There is also a Hemlock sauna with Obeche benching and a sauna with ‘Starry Sky’ fibre optics in the ceiling. In the second house the spa has Drom UK designed wellness area including a Hamman, Sauna, relaxation area, experience shower and Ice Fountain. Gary Hersham, Founding Director of Beauchamp Estates said, “These magnificent glass houses in Down Street Mews allow the buyer to completely control access to their home and living environment and live in a private and secure address which is hidden off Down Street and protected by two sets of entry gates. The clear and frosted glass facades and the floor-to-ceiling windows and skylights allow light to cascade into the living spaces, providing an extremely bright and airy ambience.” Gary Mesnick, Director at Central Estates added, “The houses have been designed so that they can be easily configured into a single 13,583 sqft mansion interconnected on all floors providing eight bedrooms, four reception rooms and two levels of leisure facilities. In the £20 million plus ultra-prime marketplace we have found that COVID-19 has been a “gamechanger” with buyers now choosing houses, where they can completely control access and their living environment, in preference to apartment buildings where there are the issues of shared access, visitors they don’t know and staff meeting lots of people.”