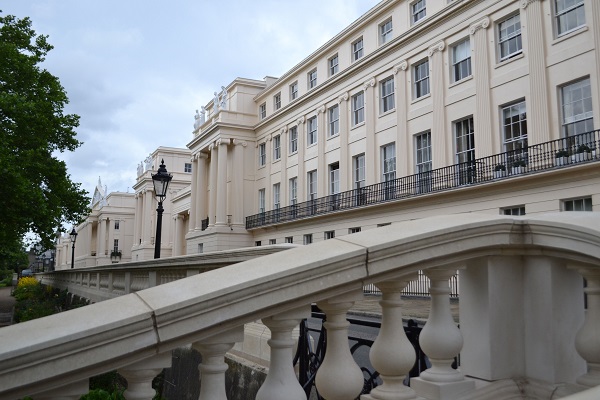 Located in Regent’s Park’s palatial Cumberland Terrace, an ambassadorial Grade I listed 5,271 sqft five bedroom Nash mansion with classical interiors, complete with a courtyard garden and 950 sqft two bedroom mews house with garage, has hosted diplomats, Royalty and artists when it served as the London home of the Spanish Deputy Ambassador Don Pedro De Sulueta and later Portuguese aristocrat Baron Alonza: it is now for sale via Beauchamp Estates. Cumberland Terrace was built in 1826-1828, designed by Crown architect John Nash (1752-1835) under the patronage of HRH the Prince Regent (later King George IV) to provide a splendid Neoclassical terrace of grand mansions for the friends and relatives of the Prince Regent and Royal Household. Originally the home of a High Court attorney, in 1839 the mansion became a semi-official diplomatic residence when it served as the London home of Don Pedro De Zulueta (1809-1882), the First Secretary & Deputy Ambassador of the Spanish Embassy in London. At this time the Spanish Embassy was located at Hertford House in Marylebone, close to Regent’s Park. Reporting to Ambassador Luis Gonzalez-Bravo y Lopez de Arjona (1811-1871), the Victorian era was a time of high tension for the Spanish mission in London. Crowned in 1833, the young Spanish monarch, Queen Isabella II of Spain (1830-1904), and her government were deeply unpopular, with Spain embroiled in a costly war with Morocco.

In both Hertford House and the Regent’s Park mansion Don Pedro and Ambassador Luis held meetings with Prime Minister Lord Melbourne to try and provide British support for the Spanish war. Another guest at the Cumberland Terrace mansion was HRH Princess Victoria of Saxe-Coburg-Saalfeld, the mother of Queen Victoria, a great political schemer and a relative of the Spanish Royal family. To add to the tensions in 1843 Don Pedro was put on trial at London’s Old Bailey, charged with allegedly financing illegal slave trading voyages through his wealthy family’s trading company Zulueta & Company. Don Pedro was later totally acquitted, but the trial of a wealthy diplomat who mixed with the Prime Minister and Queen Victoria caused a scandal in Victorian England, with journalists and onlookers waiting daily outside the Regent’s Park mansion for updates on the Old Bailey proceedings. Exhausted by the trial and the scandal Don Pedro sold the Cumberland Terrace mansion in 1850, moved to St John’s Wood and took a leave of absence from the diplomatic mission, not returning to Embassy work until 1866. The mansion’s role as a backdrop for intrigues and high society resumed in 1873 when it was purchased by Baron Alonza, a Portugese aristocrat and socialite who entertained and mixed with the café society ‘in-crowd’ of the day including James Whistler, Oscar Wilde, Lord Arthur Somerset and Henry Labouchère. West End gossips whispered that Alonza was a spy for the Portuguese government but nothing was ever proven. Prior to 1876 Alonza sold the mansion and returned to Portugal. The parquet floored entrance hall gives access to the 10-12 seater formal dining room, which has an elegant Regency fireplace and ceiling coving and two tall sash windows.  There is also the family kitchen and breakfast room on this floor. On the first floor is the main drawing room, with Regency fireplace, ornate ceiling and three full height sash windows providing views over Regent’s Park. The drawing room interconnects with the living room, providing a large entertaining space across the entire first floor of the mansion. It was in these principal rooms that James Whistler, Lord Melbourne and Princess Victoria were once entertained. The master bedroom suite occupies the entire second floor, including bedroom, dressing room and bathroom with jazucci bath and shower.  On the top floor above there are two further bedroom suites with ensuite bathrooms and a third bedroom and separate bathroom. On the lower ground floor is the study and orangery, both opening onto the garden, and a TV room/bedroom opening onto the front courtyard. Gary Hersham, Founding Director of Beauchamp Estates said, “Cumberland Terrace has a palace-like Neoclassical façade containing this magnificent Regent’s Park mansion which has served as the London home of the Spanish Deputy Ambassador and a Portuguese aristocrat. The grand principal rooms have entertained Royalty, a Prime Minister, diplomats and famous artists and provide an exceptional family home set in leafy Regent’s Park.” Cumberland Terrace is located within easy reach of Marylebone High Street, Portland Place and the West End. It is also a short distance from Mayfair and Knightsbridge.