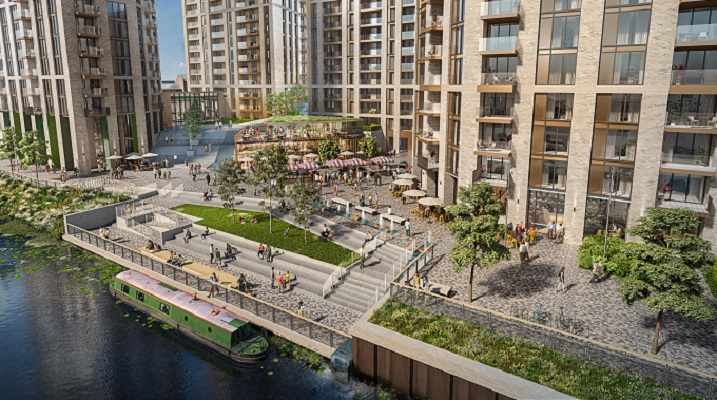 Housebuilder Weston Homes and the Estates & Agency Group have received a Resolution to Grant planning permission from the London Borough of Barking & Dagenham for Weston’s proposals to regenerate the 6 acre Abbey Retail Park in Barking being acquired from freeholder Estates & Agency Holdings Group into ‘Abbey Quays’, a new £350m (GDV) riverside urban-village. To devise a development that meets the needs of the local community and economy of Barking, Weston Homes has undertaken comprehensive local community consultation; and has worked closely with the London Borough of Barking & Dagenham and Be First, the Borough’s pioneering urban regeneration company: the result is ‘Abbey Quays’. Once a ‘Section 106’ legal agreement between the applicant and the Council is completed, planning permission can be issued. One of the biggest urban renewal projects in East London, ‘Abbey Quays’ will front directly onto the River Roding, a tributary of the River Thames, and is bordered by London Road and Abbey Road, where it overlooks the Abbey Green public open space. It is situated a short walk from Barking’s mainline and London underground station.

In Tudor times the site was a quay servicing the adjacent Barking Abbey and village. By the 19th century it was a vibrant fishing village, becoming an industrial zone during the Victorian era and thereafter. The retail park was built by the Estates & Agency Group during the 1980s providing retail warehouse units and parking. Master planned and designed by architectural practice Broadway Malyan, ‘Abbey Quays’ consists of striking contemporary buildings including a reception-hub and pavilion building, designed around the riverfront and new public and communal spaces.

The 1,089 homes will consist of 737 private sale one, two- and three-bedroom apartments and penthouses and 352 (35% of all habitable rooms) provided as affordable housing including affordable rent, shared ownership and discount market-sale tenures.

The apartments will be provided across 13 residential blocks split across three buildings, ranging from seven to 29 storeys. The residential buildings are arranged around a pair of large communal landscaped podium gardens for occupants to utilise. The buildings combine expanses of glazing with brick facades of contrasting colour with features including recessed and projecting balconies; balustrades designed as artwork to reflect the heritage of the local area; and public artwork commissioned by local artist Susanna Wallis in the form of large-scale murals etched into the brickwork of building facades, the the illustrations making reference to Barking history. Running through the centre of the plaza will be the rill water feature, its route inspired by the now lost Loxford Water tributary which once entered the River Roding at the site. The pavilion building in the plaza will house the new pub/restaurant, with outside terraces and balconies providing views over the river. There will also be food and beverage kiosks and stalls around the perimeter of the plaza, and podium steps from the plaza will give access to one of the communal gardens. Maker’s Yard will be lined with cafes and there will be space for outside exhibitions and market/deli stalls. There will be colonnaded buildings along the waterfront and the river walkway will consist of a pedestrian promenade, seating and a wildflower meadow beside the river. Detailed design along the waterfront will make references to the location’s history as a fishing village, and the long journeys the fisherman were making as far as Iceland.

The development has a comprehensive ecology strategy focused on providing attractive and biodiversity-rich greenery including landscaped areas, newly planted trees, hedges and other planting. The development will introduce 27 different species of plants and flowers including roses, violets, periwinkles, and the new trees will be including birch, crab apple, Oak and lime species. The birch trees will pay homage to the fact that the Anglo-Saxon name for Barking is “Berecignum’ which means ‘dwellers amongst the birch trees’. At night, a lighting scheme including building wash lighting, feature column lights and wayfinding spot lighting in the paving and communal gardens will illuminate the pedestrian boulevards, squares and riverside walkway. Weston Homes has a track record of delivery in Barking and this is the company’s eighth residential development in the London Borough of Barking and Dagenham with past projects including Mayesbrook Manor and Rivermill Lofts.