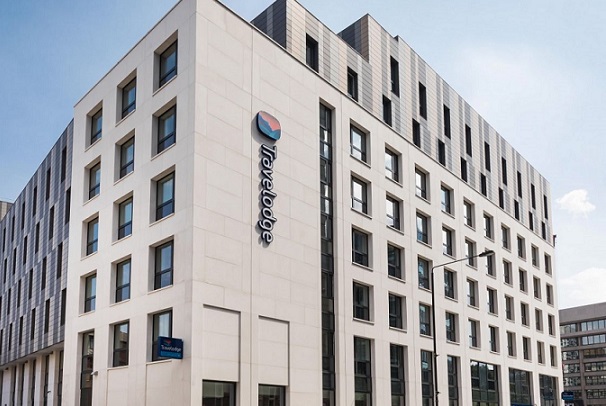 Travelodge opens its £95m flagship hotel in the City

Today, London’s first budget hotelier celebrates 30 years of trading in the capital by opening its new flagship Travelodge Plus hotel in the City of London, close to Liverpool Street station.

London City Travelodge is the company’s largest new build hotel to date. It represents an investment of £95m for third party investors and has created 100 jobs within the city. It is located on Middlesex Street, London, E1 7TP.

Travelodge Plus is a new budget chic hotel format recently launched by the company. It is designed around the needs of the modern budget traveller who wants that little bit more style and choice. Travelodge Plus hotels offer a distinctive choice of rooms as well as a new style Bar Café with touches to make it easier to work and relax outside the room.

“As London’s first budget hotel chain, we are delighted to mark our 30th anniversary of trading in the Capital by opening our new flagship Travelodge Plus hotel in the City of London.  This opening which is our 75th London hotel, celebrates how far the brand has grown and become symbolic in London for offering unbeatable value and making it affordable for business and leisure travellers to visit our Capital.”

“London remains a key growth area for Travelodge as there is a desperate need for more good quality and low cost hotels, especially across the boroughs. We are currently building a further four hotels in London in the following locations: Beckton, Elephant & Castle, Manor House and Peckham.  Collectively these hotels represent an investment value of around £82 million and a job creation of 150. However, this is just the start, as we are also actively looking for a further 100 sites across London, where we can open a Travelodge hotel over the next ten years.”

In addition to the opening of its new flagship hotel, London City Travelodge, the hotel chain has also recently opened three hotels in the Capital in Acton, Bromley and Dagenham. Collectively these three hotels represent an investment of £82 million for third party investors and have created 80 new jobs.

Currently the budget sector accounts for 22.3% of the London hotel market which is similar to the national average (21.1%) but a much lower representation than in other major cities such as Birmingham, Edinburgh and Manchester. Also with average hotel prices currently at almost twice the level of the UK regions, customers are crying out for more good quality, low-cost places to stay throughout the Capital. Therefore to meet growing customer demand, Travelodge is actively looking for a further 100 hotels sites across the Capital, to open an hotel – with a big focus on the Boroughs. This expansion could represent an investment of over £3 billion and create 3,000 jobs.

Tough year ahead for UK hoteliers with key issues to...

Revealed: The most attractive cities for hotel investments