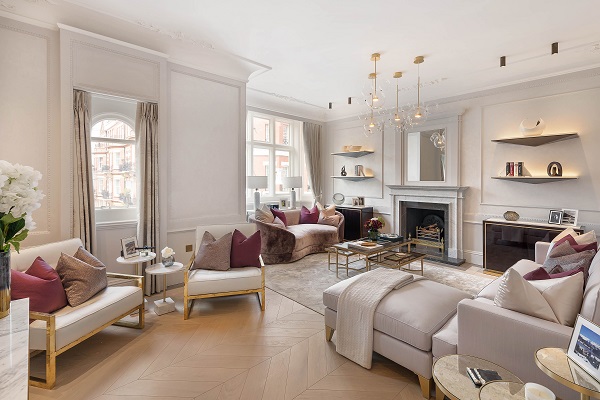 Luxury developer One Point Six has exchanged on its flagship residential development in Chelsea for a record-breaking sum. Meticulously developed and redesigned by the firm in 2019, the 1,840 sq.ft. apartment on Cadogan Gardens is the team’s most ambitious project to date.

The 3-bedroom property launched in December and was agreed three days later by Savills at £6,750,000, an equivalent rate of £3,668 per sq.ft. According to Lonres, this makes it the highest price per sq.ft. ever paid for a property at the prestigious garden square address.

Located within a beautiful Grade II listed, Queen Anne building of red brick and Portland stone, the elegant apartment is the third consecutive project by One Point Six to sold for a record-breaking figure; following successes with turnkey developments on Pont Street and Observatory Gardens. In addition to the record achieved in Cadogan Gardens, this latest project also achieved the highest price paid for a period refurbishment under 2,000 sq.ft. in Kensington and Chelsea in the last 3-years.

Bhavnish Chandaria, Director at One Point Six said, “We are delighted our Cadogan Gardens project was agreed after only three days on the market, and for a record-breaking figure. Like our previous projects, we have taken the utmost care to deliver a unique finish unlike anything else on the market and the sale of this apartment clearly demonstrates our workmanship, as well as the brilliant salesmanship of the team at Savills.

“We are thrilled to have scored a hat-trick with this project, our third consecutive record-breaking sale.  We are now looking ahead to a busy 2020, with a new project on Eaton Square where we are amalgamating two apartments into one, and more private client and commercial work in the pipeline in Africa.”

James Gilbert-Green, Director at Savills said,“This sale in Cadogan Gardens is evidence renewed confidence in the London property market after the election and highlights the premium buyers will pay for immaculately refurbished ‘turnkey’ property, which is in short supply.”

Beautifully finished using enticing warm plum and gold tones throughout, the three-bedroom property on Cadogan Gardens features contemporary flairs including Carrara marble, bespoke pendant lighting, silk wallpaper and its new residents will have the added benefit of a caretaker and access to the private garden square.

The entertaining space is the apartment’s true showpiece. The sumptuous reception room suits an array of seating arrangements, focused around a Carrara marble fireplace, custom-made pendant orb lighting, and the property’s original period cornicing and wall panelling has been restored and brought to life. Situated next to the reception room lies the formal dining room. With the option to open and close up with sliding, concealed doors, this intimate area has been finished in a rosewood, high-gloss pearlescent lacquer panelling.

One Point Six was established in 2017 by Yadav Jani and Bhavnish Chandaria, their principle of the ‘golden ratio’ driving them to deliver record-breaking luxury developments, initially in London. The perfect symmetrical relationship between two proportions, the “golden ratio” has been the core theory behind all of One Point Six’s projects. This, combined with the duo’s exemplary attention to detail, has empowered the team with the vision to create, design and deliver one of a kind homes for private clients and investors.