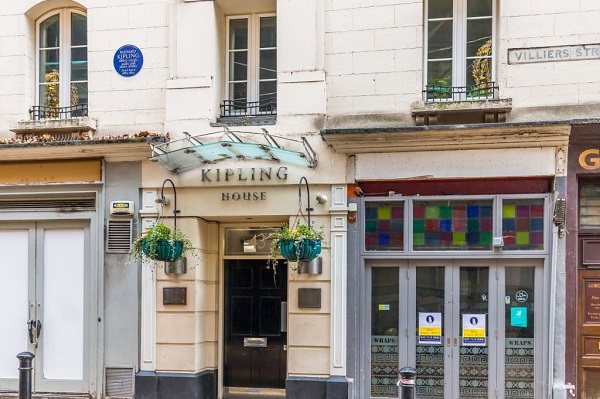 Providing 1,931.7 sq ft of living space, a two-bedroom apartment in Kipling House at 43 Villiers Street, named after English writer Rudyard Kipling (1865-1936) – who lived in Kipling House between 1889 and 1891 – is for sale through leading London estate agent DEXTERS.

Located on the fifth floor of Kipling House, the lateral corner apartment has a spacious dual aspect reception room with a Juliet balcony, a separate kitchen, a principal bedroom suite with ensuite bathroom, a second bedroom and family bathroom. 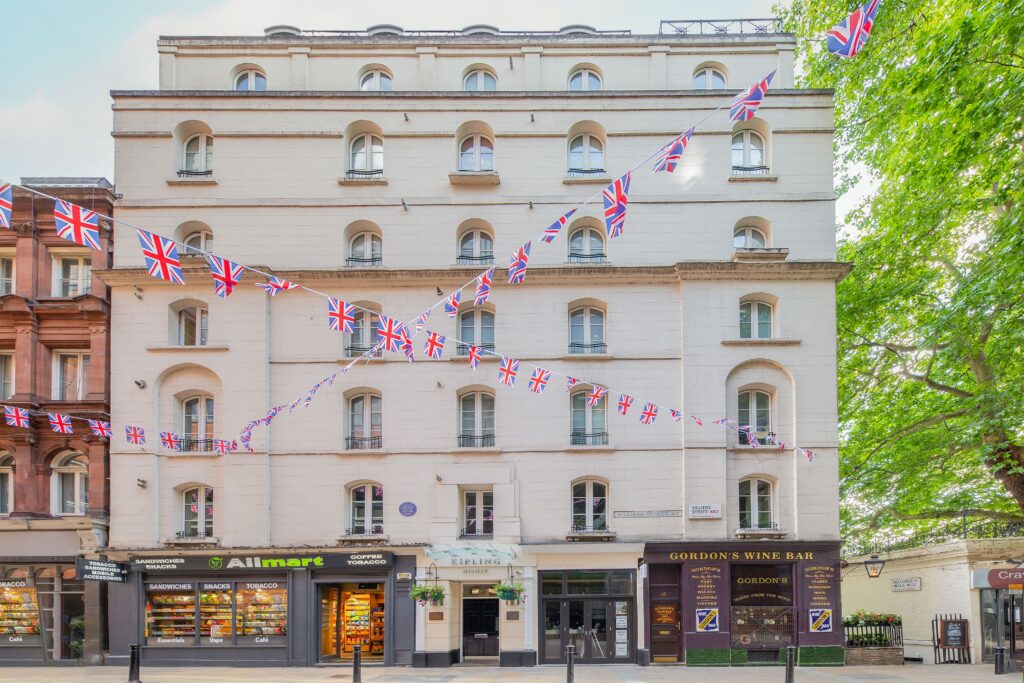 With a Blue Plaque erected in 1957 in Rudyard Kipling’s honour, Kipling House, at 43 Villiers Street in Embankment, on the doorstep of Covent Garden and Whitehall, is an eight storey apartment building with a cream brick façade with arched windows.

The site of Kipling House traces its origins back to 1237 when it was occupied by a townhouse owned by the Bishop of Norwich, then in 1687-88 a house was built on the plot which was occupied by renowned diarist Samuel Pepys (1633-1703) until 1701. 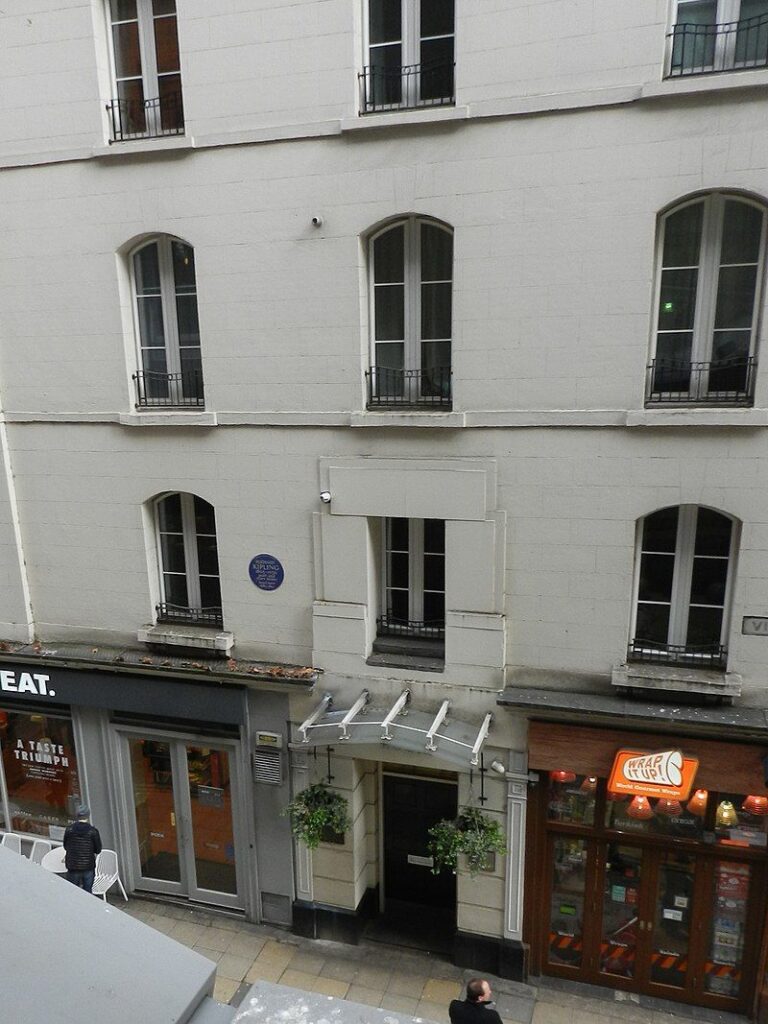 The current Kipling House was originally built as a warehouse in 1790 and then converted into a Victorian apartment building in 1880, comprised at the time of one bedroom apartments, providing a living/dining room, bedroom and bathroom, most were rented out as “bachelor lodgings” to single people like Kipling.

Rudyard’s Kipling’s life at 43 Villiers Street is reviewed in his biography Rudyard Kipling: A Life (2000) by Harry Ricketts. Rudyard Kipling was born in Mumbai in 1865, educated in England, and then worked as a journalist in India between 1883 to 1889. In 1889 Kipling travelled to London and moved into a one bedroom apartment on the fifth floor of 43 Villiers Street. 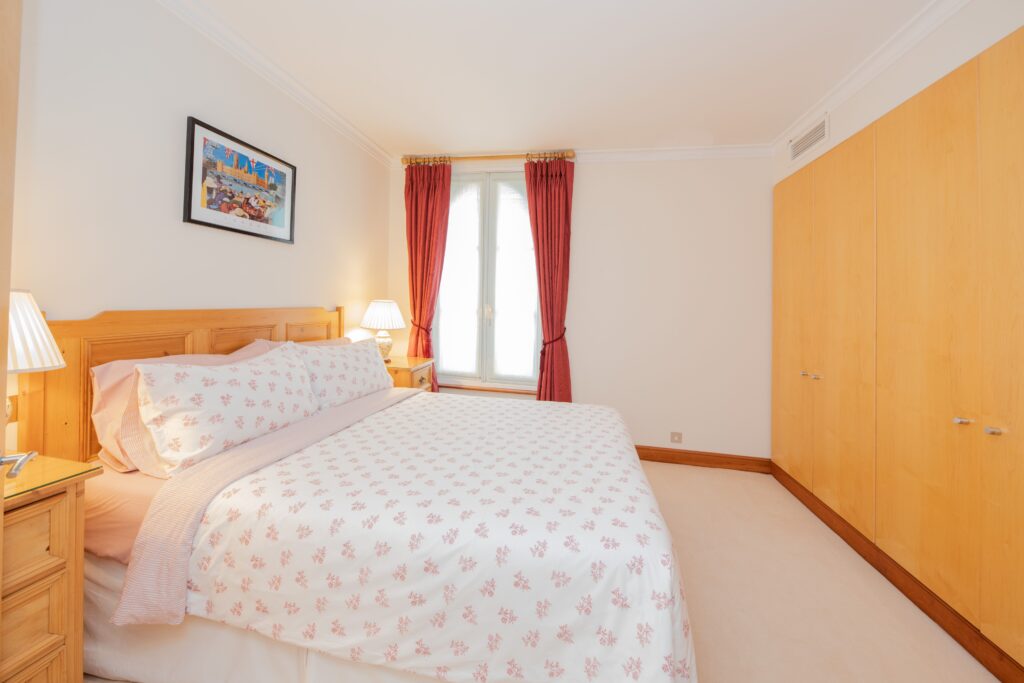 It was here that Kipling wrote his first novel, The Light That Failed, which was first published in Lippincott’s Monthly Magazine in January 1891, and also Barrack-Room Ballards, whose verse Mandalay, published in 1890, is famously recited by Lord Mountbatten in Coup, The Crown Series 3, on Netflix.

Kipling’s fifth floor apartment, at that time, was above the ground floor shop of “Harris the Sausage King” where Kipling often dined on a cheap meal of sausage and mash. In his time spent living at 43 Villiers Street, Kipling allegedly tried to invite the famous writer and explorer Mary Henrietta Kingsley (1862-1900) up to his apartment, however, according to Kipling, this did not happen due to the societal expectations of the time. 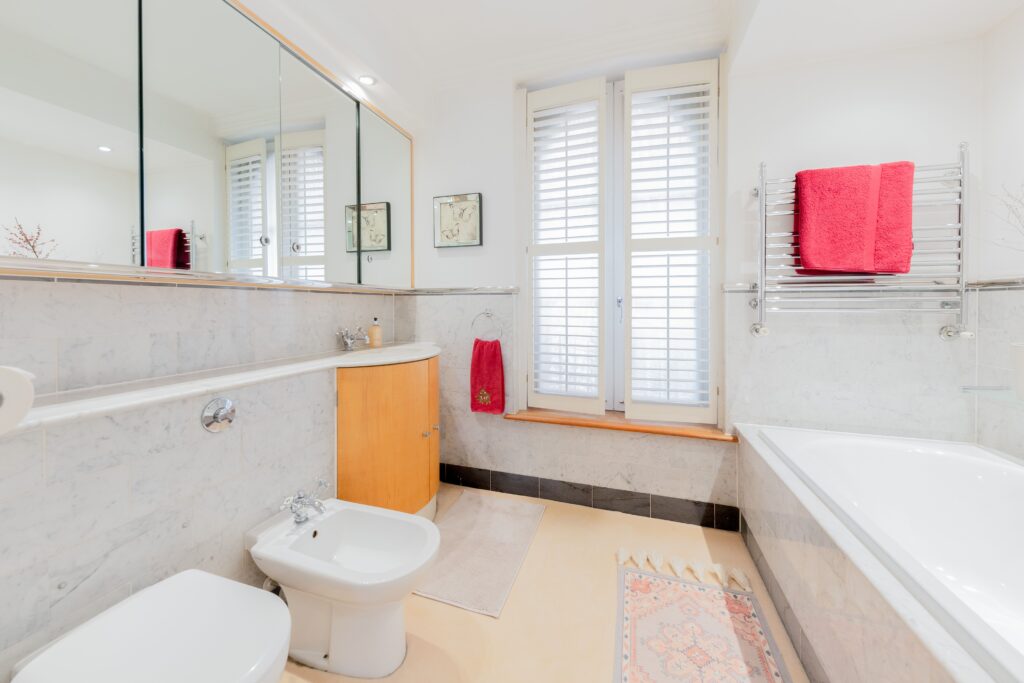 In 1891 Kipling started dating Caroline Balestier, who he later married in 1892, so he left his “batchelor lodgings” at 43 Villiers Street and eventually moved in with Caroline, the family living from 1894 onwards on Ebury Street in Pimlico. Kipling went on to write many popular novels including the Jungle Book dilogy (The Jungle Book, 1894; The Second Jungle Book, 1895), Kim (1901) and the Just So Stories (1902).

He was subsequently awarded the Nobel Prize and was the first English-language writer to receive the prize and the youngest recipient to date, being only 41 at the time of the award.

In the 1920s 43 Villiers Street was refurbished to provide larger apartments, including two bedroom apartments, and in 1950 the building was renamed Kipling House in honour of Rudyard Kipling. 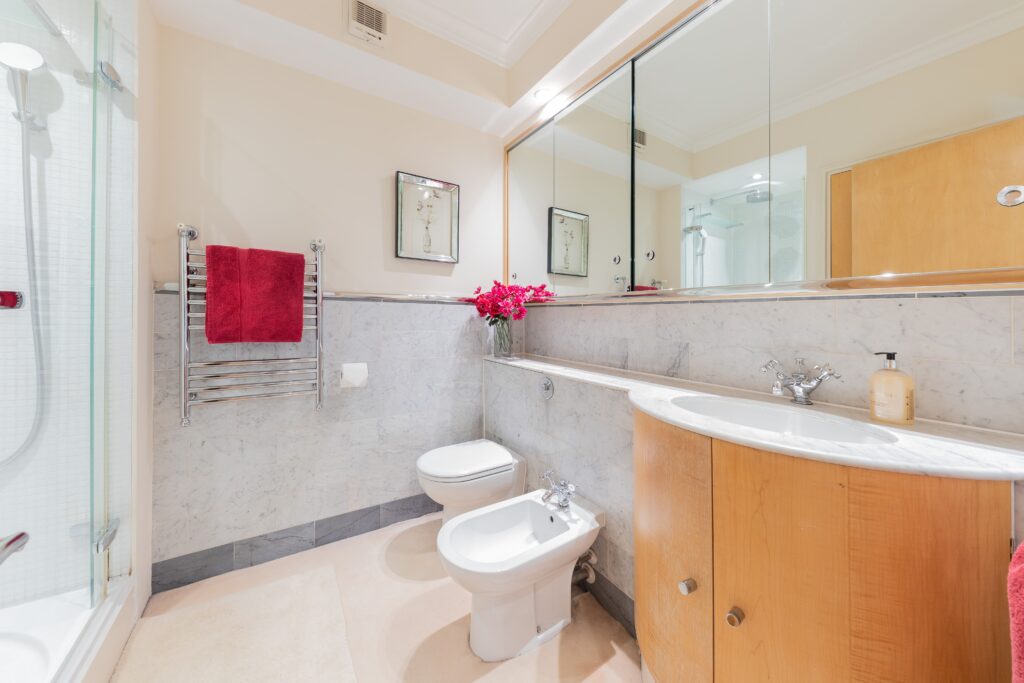 So is this fifth floor apartment actually Rudyard Kipling’s apartment? It is highly possible, since the floor, details and views match the information provided in Rudyard Kipling: A Life (2000) Certainly Kipling would have enjoyed the same reception room layout and view – which he recorded in his autobiography Something of Myself: “from my desk [in the living room] I could look out of my window through the fan-light of Gatti’s Music-Hall entrance, across the street, almost on to its stage. Charing Cross rumbled through my dreams on one side, the boom of the Strand on the other.”

Fully modernised and ideal for 21st century London living the fifth floor apartment in Kipling House – which could have been the home of Rudyard Kipling – has a spacious dual aspect reception room with floor-to-ceiling arched windows, allowing natural light to casade into the room. 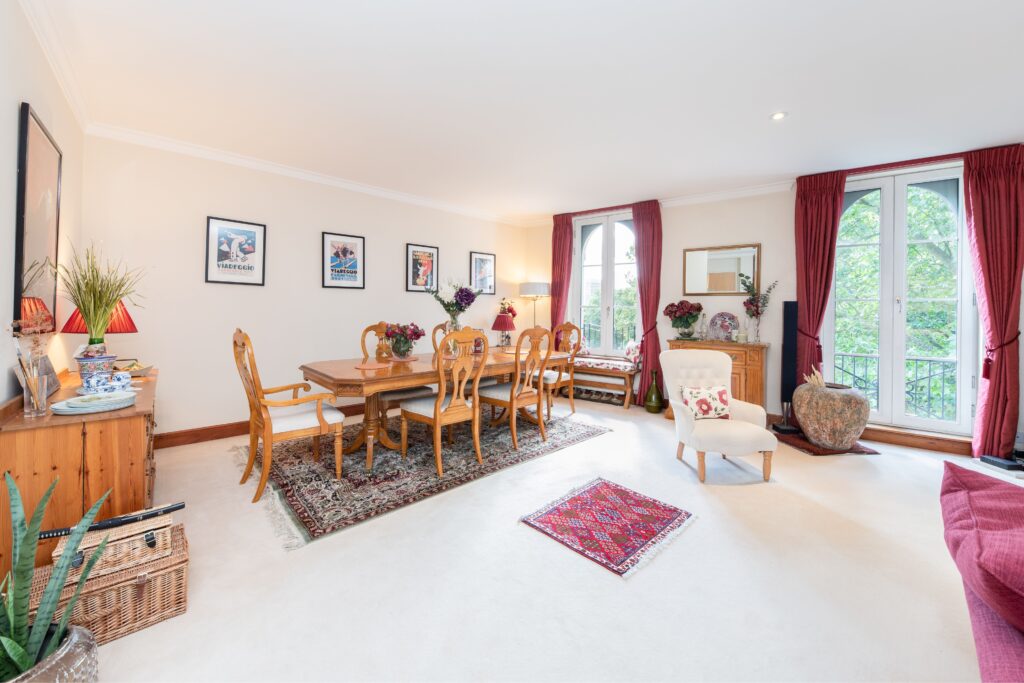 The generously sized room can be used as a living room, dining room and study/home office – just like Rudyard Kipling did. The fully fitted kitchen has stone flooring, sleek white built-in cupboards and cabinets, dark stone worktops and integrated appliances with space by the tall window for a two/three seater dining/breakfast table. 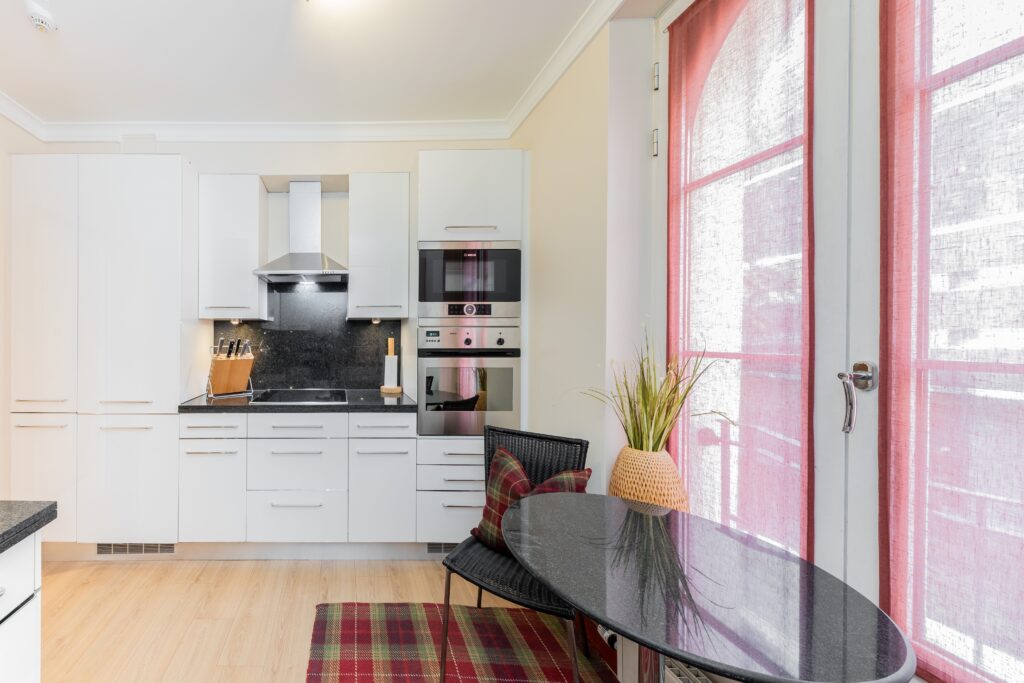 Other famous residents of Villiers Street include writer John Evelyn (1620-1706), the founder of the Spectator and Tatler magazines, and Irish writer Richard Steele (1672-1729). Villiers Street is located just a minutes walk from both Charing Cross Station and Embankment Underground Station. Trafalgar Square and The National Gallery are just a five-minute walk away, and the apartment offers easy access to Whitehall, Covent Garden, the West End and the City of London.

James Staite, Director of DEXTERS (Fitzrovia & Covent Garden) said, “Renowned English writer Rudyard Kipling lived in Kipling House in a bachelor apartment between 1889 and 1891. Was this his actual apartment?, certainly the floor, details and views match the information provided in Rudyard Kipling: A Life (2000). 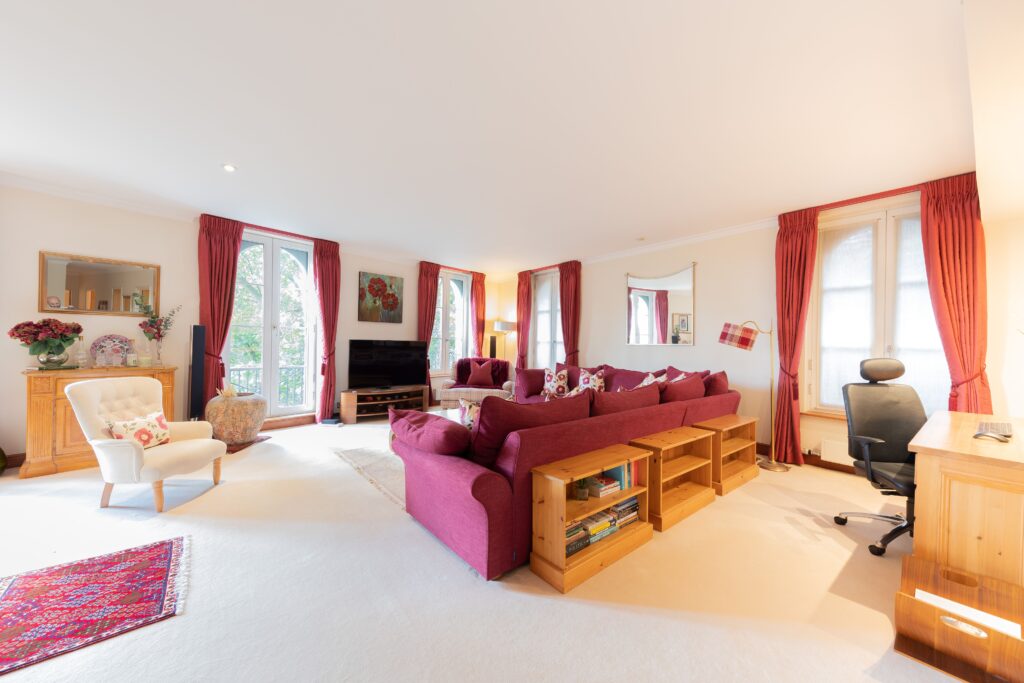 “We know that Kipling lived on the fifth floor, above the ground floor shop of “Harris the Sausage King”, so this might have been his apartment! The key thing is that this spacious two bedroom apartment provides the perfect London base, located right in the heart of the capital on the doorstep of Whitehall and Covent Garden, and perfect for access into the City of London.

“The Rudyard Kipling history is a fantastic story for the new owners to tell guests when entertaining in the apartment.”

The fifth floor apartment in Kipling House is for sale with DEXTERS for £2,499,950, with a guided video tour or in-person viewing available. For further information, or to book a video tour, please contact DEXTERS (Fitzrovia & Covent Garden) on Tel: +44 (0)20 7067 2401 or visit www.dexters.co.uk

Providing 1,931.7 sq ft of living space, a two-bedroom apartment in Kipling House at …