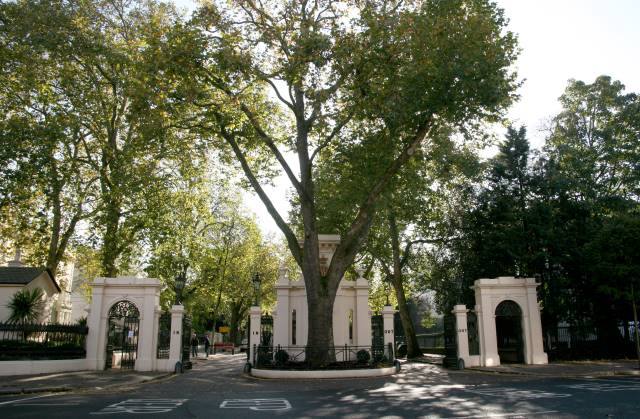 Prime and super-prime London property selling portal, Vyomm, looks at the world’s most expensive street, Kensington Palace Gardens, who the homeowners are and how you go about selling and buying in one of the world’s most secretive streets.

With an average house price thought to be in the region of £37m, the nation’s most prestigious street is owned by the crown estate and is home to Kensington Palace, the building that lends the street its name, and home to high profile royalty such as the Duke and Duchess of Cambridge.

Purchased in 1689 for the equivalent of £4m today, Kensington Palace is a building that just can’t be valued in today’s property market, although William and Kate’s flat alone was valued at £60m just two years ago based on its size.

The street is also home to a number of high profile embassies, including the Russian, French Nepalese, Lebanese and Japanese embassies, as well as the Russian and Finnish ambassador’s residence.

But who else lives there?

Tamara Eccleston resides at number 8 which is thought to be worth £171m having been purchased for £45m in 2011, the property contains 57 rooms, an indoor pool and cinema room.

Formerly number eight, the London cage gained notoriety as a facility for interrogation of German POWs during the second world war and came under scrutiny for the suspected tactics of carrying out this interrogation. Much like its history, the property remains shrouded in secrecy today.

Wang Jianlin bought number 15a for a cool £80m in 2015 which is considered one of the deals of the century as he bought it from the Crown Estate. A private sale would have cost him a lot, lot more.

Number 15b is home to Leonard Blavatnik. The Russian-American billionaire has since added underground parking, a pool and cinema since snapping up the property and it is valued at over £200m.

Chelsea owner, Roman Abramovich, resides at number 16, having bought the property for £90m in 2011. A Grade II listed building, the Chelsea F.C owner has since added a leisure complex and pool with the property stretching 20,000 sq ft.

Number 18 to 19 is owned by Lakshmi Mittal, owner of the world’s largest steelmaking company. Perhaps one of the most impressive houses on the street, the 55,000 sq ft property it is thought to be worth well over half a billion pounds.

Finally, and perhaps controversially of late is number 20, owned by Hassanal Bolkiah, the Sultan of Brunei. He has lived at KPG for three decades.

But what’s the trick to buying in one of the most secretive streets in the world?

Founder of Vyomm, Utsav Goenka said, “Homes on Kensington Palace Gardens are like Picassos, extremely hard to come by, even harder to part from their previous owners, and often require a much higher sale price than expected. These works of art are part of London’s historic fabric and so on the rare occasion a door does open, you have to make an offer they would be foolish to refuse in order to keep it open.

“The reason that it is so hard to value and sell these properties is simple, they are a finite resource and one that is extremely sought after within the highest climbs of the London property market.

“These homes are never seen on the open market and they always change hands discreetly and away from the media’s glare. We’ve handled a number of enquiries and offers over the previous year but these are always carried out in secrecy and so without someone to help leverage such opportunities, making a sale materialise is all but impossible.

“So while many can attempt to value these properties based on what they were bought for and what the market has done since, the reality is, they are worth what their owner is willing to accept and not a penny less, if you can get to the offers stage first that is.”