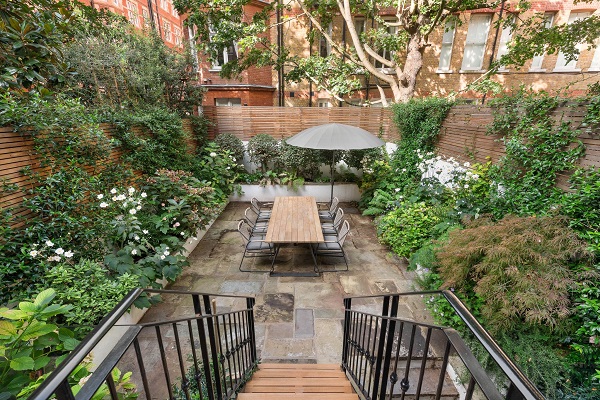 Cinderella Stepmother’s fairytale London mansion for sale for only £16m

An elegant six bedroom 5,070 sqft (471.28 sqm) townhouse in London’s Hyde Park Gate, once the London mansion of Mary Caroline Blair, the Duchess of Sutherland (1848-1912), whose life help inspire Oscar Wilde’s A Woman of No Importance and Disney’s 1950 Cinderella Stepmother, has been brought to market. The townhouse is available via joint sole agents – the instruction is for sale through Beauchamp Estates and to let through Tunstall Property and Beauchamp Estates. Located off Kensington Road, on the doorstep of Hyde Park, the Royal Albert Hall and Knightsbridge, the townhouse at Hyde Park Gate was originally built in 1842-1843 by school-owner turned developer Joshua Flesher Hanson, designed by architect Robert Cantwell in the Nash tradition. In 1875 the Hyde Park Gate townhouse became the London home of Mary Caroline Blair (nee Mitchell) and her husband Captain Arthur Blair, the couple had married in 1872. Captain Blair had served since 1861 as the land agent and financial advisor to George Sutherland-Leveson-Gower, 3rd Duke of Sutherland (1828-1892). At the time the Duke was one of the richest people in Britain, owning 1.4 million acres of land and Lancaster House, a private palace on the Mall adjacent to Buckingham Palace. At Hyde Park Gate the Blairs entertained the 3rd Duke of Sutherland, the Duke’s sister Constance (the Duchess of Westminster), Lord Ronald Gower (the Duke of Sutherland’s younger brother), and Oscar Wilde, who was a close friend of both Constance and Lord Gower.  In 1882 Mary Blair became the Duke of Sutherland’s mistress and in 1883 when her husband died after a shooting accident gossips speculated that it was suicide or murder, although the official verdict was accidental death.

As documented by biographer Catherine Layton in her 2018 book Power Play: The Life and Times of Mary, Dowager Duchess of Sutherland, the affair between the married Duke (whose wife Anne was a friend of HM Queen Victoria) and the widow continued after her husband’s death, but in 1889 Mary caused scandal when she and the Duke married only four months after the death of the Duke’s estranged wife. The marriage broke aristocratic convention that widowers should not remarry for a year and went against a written request to the Duke from HM Queen Victoria who was still grieving over Anne’s death. As the new Duchess Mary now had a high rank in British society but she was not welcome at any Royal or society event.

In 1892 the Duke died and left Mary his fortune, instead of leaving his estate to the children from his first marriage; his son Cromartie, 4th Duke of Sutherland, and his daughters, Lady Florence and Lady Alexandra. The will was contested with the court case confused because Mary had arranged for the Duke’s will (containing provisions for his children) to be burnt. In April 1893 the judge sent Mary to Holloway Jail for contempt of court. In 1894, to avoid further scandal, the 4th Duke of Sutherland reached an agreement with his “wicked stepmother” for the Dowager Duchess to have sufficient funds to build Carbisdale Castle and maintain the townhouse at Hyde Park Gate.

The Dowager Duchess caused further scandal by marrying a third husband, Sir Albert Rollit, a wealthy shipping tycoon. In 1898 Mary’s jewellery, then valued at £30,000 (a fortune at the time) was stolen by international jewel-thief William Johnson, as the ex-Duchess was travelling on the Orient Express from Paris to London. After a lifetime of scandalous media headlines Mary died in London on 27th May 1912. Mary’s soirées at the Hyde Park Gate influenced Oscar Wilde who modelled Lord Henry Wotton in The Picture of Dorian Gray on Lord Gower and based Mrs Arbuthnot in A Woman of No Importance on Mary. A photograph of the Dowager Duchess appeared alongside an advertisement and editorial about A Woman of No Importance, published in The Illustrated London News on 29 April 1893. PR savvy Oscar Wilde scheduled the play to premier the evening the Dowager Duchess went to Holloway Jail which generated further publicity for both the play and the Duchess. Now the Hyde Park Gate townhouse whose Duchess helped inspire Oscar Wilde and the Disney’s Cinderella stepmother is available for sale or to let. The ground floor entrance leads into the inner hall with main staircase, with two sets of double doors providing access to the dining room, overlooking the front façade, and the family kitchen, which has stone flooring, grey fitted units and cabinets, a central island, with French doors leading to the rear garden. The first-floor reception room, where Mary hosted the Duke of Sutherland, Lord Gower of Dorian Gray fame and Oscar Wilde, has full height windows opening onto an ornamental balcony, with the room giving access to the sitting room/study which has an arched window overlooking the garden.

The principal bedroom suite occupies its own private floor on the second level of house, incorporating the bedroom, marble floored main bathroom and private roof terrace. There are five further bedrooms, three ensuite, and two sharing a family bathroom. The media room/cinema and gymnasium are on the lower ground floor. Mark Tunstall, Founding Director of Tunstall Property says: “This Hyde Park Gate house is a superb family home, modernised throughout, and benefitting from generous ceiling heights to the principal entertaining floors, with each of the principal rooms featuring full height windows, fireplaces and Oak strip or parquet flooring.”