Did you know this?

The greater the value of the home, the lower the chance of arguments between neighbours in London, according to a new study.

£532,486 is the ideal property value for living the peaceful life in the capital

Research reveals the city’s main causes of arguments between neighbours

Full findings can be found here

Research by window blinds retailer, Direct Blinds, found that there was a correlation between property price and the level of arguments between neighbours, with altercations fewer and far between in London as the property price increases.

Stats showed however, once passing the £1.7m threshold, the number of quarrels then rises again, proving money cannot buy you happiness in the capital, instead it could lead to having a frosty relationship with fellow residents. 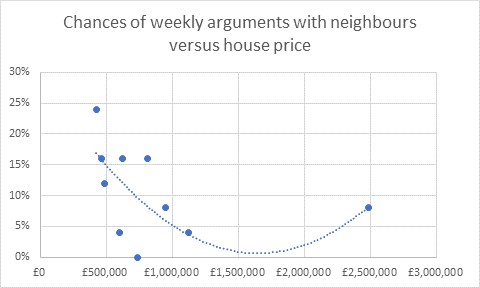 Average house price data suggests that £532,486 is the optimum property value for those in the capital hoping for a quiet and peaceful life, with occupants in these properties having the lowest chance of weekly arguments with neighbours.

At the other end of the spectrum, residents of homes with a value of £365,564 tend to have less cordial relations, as they’re most likely to cause confrontation with one another.

A full breakdown of the findings, methodology and supporting graphics can be found here.

Noise complaints topped the charts as the most common cause of these disputes between London neighbours (22 per cent), this was followed by car parking (10 per cent) and disputes of the bins (7 per cent).

Quarrels are frequent in the city, with 10 per cent of Londoners involved in disagreements with neighbours at least once a month, 6 per cent admitted to doing so on a weekly basis, and 5 per cent were guilty of arguing daily.

David Roebuck, managing director, at Direct Blinds, said: “London is one of the most sought after locations to live in the world, attracting people from all over the globe, this is what makes the capital such a diverse place to live.”

“More often than not perceptions can be quite different to reality, especially elsewhere in the UK where Londoners can have a reputation for being stand-offish.”

“It was interesting to find that a quarter of Londoners would never introduce themselves to a new neighbour and that 10 per cent argue at least once a month, love thy neighbour seems to go amiss here!”