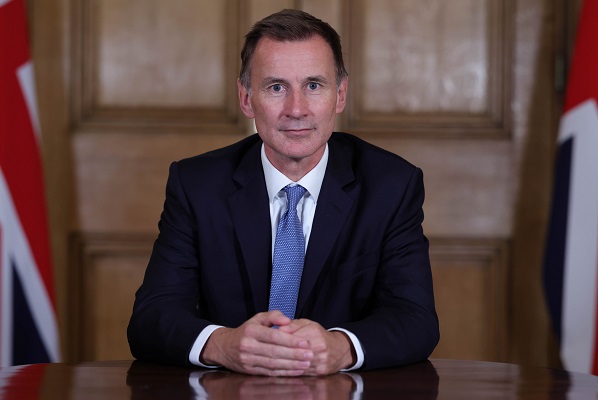 The Chancellor announced on Monday that the energy price guarantee for millions of households will now only last up until April 2023.

Hunt said that there will be a review to look into a “new approach” to target families who are worse off from April onward, and he said in a televised briefing the government are committed to helping millions of households over the winter period.

However, he said, “beyond that, it would not be responsible to keep exposing public finances’ to global energy prices.”

The Prime Minister had initially said there will be energy support for two years when she came into office, and the plan was to freeze the average bill at £2,500 a year.

In an emergency statement, Hunt said on Monday morning, “The biggest single expense in the growth plan was the energy price guarantee.

“This is a landmark policy supporting millions of people through a difficult winter ad today I want to confirm that the support we are providing between now and April next year will not change.”

The Chancellor added, “So I’m announcing today a Treasury-led review into how we support energy bills beyond April next year.

“The objective is to design a new approach that will cost the taxpayer significantly less than planned whilst ensuring enough support for those in need.

“Any support for businesses will be targeted to those most affected and the new approach will better incentivise energy efficiency.”

“The humiliating climb-down on their energy plan begs the question yet again – why won’t they bring in a windfall tax on energy producers to help foot the bill?

“Only Labour offers the leadership and ideas Britain needs to fix the economy and get out of this mess.”

The Chancellor will address MPs in the House of Commons at 15.30

Emma Hollingworth, Distribution Director, MPowered Mortgages said, “The new Chancellor’s decision not to scrap the cuts to the Stamp Duty is an indication that the government is still serious about tackling the issues the housing market faces.

“Interest rates are now at the highest level seen since 2008, meaning many first-time buyers could be priced out of getting on the housing ladder, so the cuts to Stamp Duty is a welcome change for many.

“Indeed, the biggest challenge we are currently faced with is the cost-of-living crisis. Confidence will come from support which we have already seen in the form of help with energy bills and SDLT cuts.

“Lenders can also play their part by being wise to the concerns many will be facing and adjusting products accordingly – whether it be in the form of free valuations, cash-back products, or competitive rates. This is certainly a priority for us at MPowered Mortgages.”

Nathan Emerson, CEO of Propertymark said, “The Chancellor’s commitment to the Stamp Duty thresholds that better represent house prices will certainly help to restore some market stability and confidence which has taken a hit.

“Mortgage rates were already rising and we hope the wider announcements made today will translate into a settling down of that trajectory so buyers can proceed with more confidence that some of those additional lending costs will still be offset by Stamp Duty savings.”

Iain Crawford, CEO of Alliance Fund added, “Although today’s U-turn is an attempt to calm the waters, it’s fair to say that the government’s shambolic behaviour is unlikely to distil much confidence in the UK economy.

“However, as it stands, the UK public will embrace any shred of stability afforded to them in what are currently very uncertain times and the one silver lining of this latest government backtrack should be a boost to property market confidence.

“We’re already seeing a strengthening of the pound with gilt yields also dropping and this easing pressure on the markets should reduce the likelihood of higher interest rates.

“This will help settle what has been a turbulent mortgage market in recent weeks, rejuvenating buyer demand levels, which will also help to stabilise house prices and investment into the UK property market.”

Marc von Grundherr, Director of Benham and Reeves said, “An extraordinary turn of events, quite literally, but one that should help strengthen a property market that was starting to wobble under the pressure of increasing mortgage rates and dwindling buyer sentiment.

“While maintaining a cut to stamp duty will help stimulate buyer demand within the market, overall market health will be far better maintained by stabilising the mortgage sector and our ability to fund a property purchase in the first place.

“We should now see this with pressure easing, making the threat of further mortgage rate increases over the coming months less likely.”