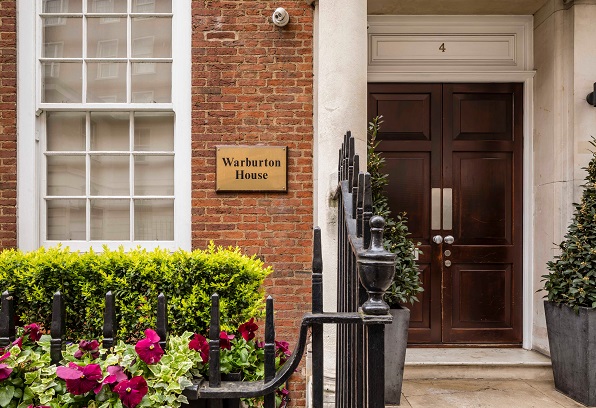 Warburton House is a rare opportunity to purchase an exquisite lateral apartment located in a historic former military hospital which has direct access to one of Mayfair’s secret gardens. A grand neo-Georgian mansion transformed to provide seven luxury apartments, 7 Warburton House is one of Mayfair’s finest addresses, available to buy exclusively through sole agent Wetherell for £4,500,000. Mayfair has three large secret gardens located at Green Street, South Street and Culross Street, offering residents a tranquil retreat and often completely unknown to passers-by. Located on the fourth floor, 7 Warburton House has direct access onto the secret garden of Green Street from the building’s ground floor. Just 75 homes have access to the gardens, making this a rare purchase opportunity, with Wetherell anticipating high demand for the beautiful apartment. Located at 4 Dunraven Street, Warburton House has a rich history; it was originally conceived as three terraced homes by local Mayfair architect Frederick William Foster, but a singular neo-Georgian mansion block was constructed between 1913-1916; financed by Sir Courtauld-Thomson KBE, CB and spanning six windows wide. Known then as Norwich House on Norfolk Street, the elegant mansion was sold to Mr Penryn Vaughan-Morgan for him and his wife, although the couple never lived in the property. From 1917 to 1919, the mansion served as a military hospital named The Garland Home, a section of Queen Alexandra’s Military Hospital in Millbank, with 36 beds for sick and wounded officers in the Great War. Following 1919, the mansion was sold to and occupied by Sir Eric Hambro KBE, a wealthy merchant banker and Conservative politician. In 1939 Norfolk Street was officially renamed Dunraven Street after the 4th Earl of Dunraven. The mansion was then used as office space, before undergoing a dramatic transformation back to residential use at the start of the 21st century. Now, Warburton House offers a collection of seven luxury apartments each with views onto and exclusive access into the secret garden of Green Street. Green Street garden was created by the Grosvenor Estate in the early 20th century and offers peaceful landscaping with a lily pond, ducks and deckchairs. Warburton House has a smart, red brick façade with a Doric porch and is set back from the street’s building line. The large three-bedroom apartment provides 1,795 sqft of lateral living space, accessed via a secure lift opening directly into the apartment. There is a double reception room which benefits from three windows overlooking the Green Street gardens, bathed in natural light. The bespoke kitchen has contemporary cabinetry in a cream hue and Siemens appliances, with large-format white tiles and windows overlooking Dunraven Street. There is also a separate utility room and comfort cooling to principle rooms. The property provides a large master bedroom suite with a luxurious en suite bathroom, including a free-standing bathtub, and a dressing room with bespoke fitted cabinetry, with both the bedroom and en suite bathroom offering views onto the Green Street gardens. There are a further two spacious guest bedrooms, one with an en suite bathroom, and a sleek family WC and show room. A hidden gem of 7 Warburton House is a spacious, 330 sqft private roof terrace, located on the fifth floor and accessed by an internal staircase. The roof terrace is large enough for stylish outdoor furniture and offers extensive, panoramic views over Mayfair. “If you are walking in the Mayfair area you would never know that behind these grand buildings there lies a secret garden with a lily pond, ducks and deckchairs. Warburton House also has a rich history as a former private mansion which served as a military hospital in World War 1. Given the location and exclusive access to the gardens, we anticipate very high demand for this exquisite property.”

Warburton House is located on Dunraven Street, a residential road within moments of Hyde Park. For shopping and amenities, Mount Street and South Molton Street are both nearby. Warburton House is well located for transport, with Marble Arch underground station a seven-minute walk away.