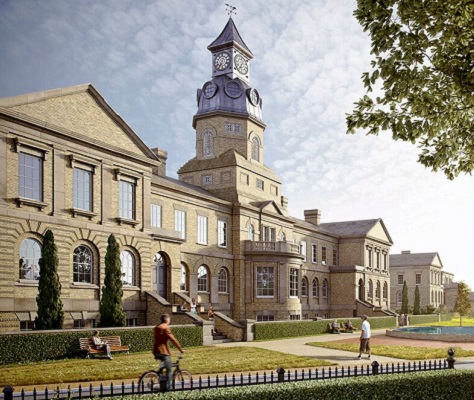 Weston Homes has purchased the Grade II listed Cambridge Military Hospital in Aldershot, a 12-acre (4.9 hectare) collection of magnificent Victorian and Edwardian buildings. The site acquired by Weston Homes will be converted to deliver a £60m (GDV) residential conversion project as part of the Aldershot Urban Extension scheme, now known as Wellesley, being delivered by Grainger plc. Weston Homes plan to start the restoration and conversion of the Victorian hospital and ancillary buildings in the summer of 2019, with the project anticipated to be phased over several years. With a commuter train time of just 43 minutes into London Waterloo, Weston Homes forecast that the homes will appeal to a combination of local Aldershot residents and London and Basingstoke business commuters. The Cambridge Military Hospital was built between 1875-79, the grand rooms and tall windows delivering light, air circulation and constant temperature based on design principles outlined by Florence Nightingale. The hospital was opened on 18 July 1879, named after HRH Prince George, Duke of Cambridge, cousin of Queen Victoria and Commander-in-Chief of the British Army from 1856 to 1895. The Cambridge Military Hospital was built by Martin Wells & Co in an Italianate neo-classical style, with yellow brickwork and Bath stone dressings, designed around a grand central administration building with nine long ward pavilions, linked by an axial corridor, located behind and to either side. The bell in the central clock tower is one of a pair captured during the Crimean War, the other is in Windsor Castle.

Alongside the main hospital building there is also Louise Margaret Hospital, opened in 1897 to treat the wives and children of soldiers, and Gunhill House, opened in 1907, providing accommodation for nursing sisters working at the main hospital.  In later years the Louise Margaret became a maternity hospital treating both civilians and military, with many of the people of Aldershot having been born there up until its closure in 1995. The Cambridge Military Hospital was the first British hospital in history to receive casualties direct from the battle front, the injured from the battle of Mons in 1914. It is also the birthplace of plastic surgery, where Harold Gillies started a Plastic Surgery United in the hospital at the end of 1915. Royal visitors have included HM Queen Alexandra, HM Queen Mary, HM Queen Elizabeth II, HRH Princess Anne and HRH Princess Margaret. The hospital was home to Queen Alexandra’s Royal Army Nursing Corps and the injured war heroes from Britain’s key 20th Century conflicts were nursed back to health in the wards including troops from the Boer War, the Battle of the Somme in WWI, the D-Day landings in WWII and the first Gulf War in 1990-1991. The Cambridge Military Hospital was closed on 2 February 1996 in a ceremony attended by HRH Princess Margaret. In 2001, the Ministry of Defence announced that the hospital was surplus to military requirements.

On 2 March 2011 Grainger plc was appointed as the Development Partner by the Defence Infrastructure Organisation’s (DIO) for the delivery of the Aldershot Urban Extension scheme, now known as Wellesley, of which the Cambridge Military Hospital forms a part. Proposals to convert the hospital into housing were approved in March 2014. Grainger plc have selected Weston Homes, a recognised specialist in the restoration of historic buildings, to undertake the conversion of the Cambridge Military Hospital and ancillary buildings into a new residential address. Weston Homes have restored historic buildings including Royal Earlswood Hospital, the Denham Film Studios, Mayfield College and Preston Hall.

Whilst Weston Homes focus on the restoration of the Cambridge Military Hospital, Grainger plc will continue spearheading the ongoing delivery of the wider Wellesley, Aldershot Urban Extension Scheme, which covers 370.7 acres (150 hectares) and delivers 3,850 new homes, community and leisure facilities, two primary schools, and a local neighborhood centre, as well as the Wellesley Woodlands, an additional 271 acres (110 hectares) of natural green space. Weston Homes will convert the main Cambridge Military Hospital to provide 74 homes including apartments and houses, commercial/community facilities and grand communal foyers and spaces. There are plans for a feature penthouse in the landmark clocktower.

There will be a new square in front of the building’s main façade and clocktower, with the main entrances being via two grand porches, reached by flights of steps. The work will reintroduce the elegant original elevations which will be enhanced with refurbished and new covered balconies. Between the pavilion wings Weston Homes will create private gardens and parking for residents. Inside, the spacious rooms, high ceilings (up to 15.5 ft high) and original features such as fireplaces, paneling and staircases will be retained and incorporated into the new homes. Around the restored heritage buildings there will be semi-private gardens and courtyards, open lawns and tree planting, creating a beautiful setting for the new residential development.

Bob Weston, chairman & chief executive of Weston Homes said,  “Weston Homes is pleased to be working alongside Grainger plc to reinvigorate the iconic Victorian and Edwardian military buildings of the Cambridge Military Hospital and transform them into a new residential address for Aldershot that local people will be proud to call home.

“With our proven historic building restoration expertise, Weston Homes will bring a new lease of life to these heritage buildings which are of national importance due to their military history, we will transform them into modern homes layered with the rich history and unique character of this historic site.” Helen Gordon, chief executive of Grainger plc said, “We are delighted to have secured Weston Homes for this important heritage site and look forward to working with them to deliver 140 new homes within the historic buildings of the Cambridge Military Hospital.

“Weston Homes has proven restoration and conversion skills which will be essential for ensuring the preservation of the period buildings. This partnership underlines Grainger’s commitment to the wider Wellesley development and reinforces our role as a leading partner for major residential regeneration projects.” Robert Stone, head of estates, Defence Infrastructure Organisation said, “We are pleased with this acquisition by Weston Homes, which secures the future of these important historical military buildings.  The iconic Cambridge Military Hospital, a local and national icon steeped in history, is a key cornerstone of our strategy for the Wellesley development, and we are therefore delighted to see these buildings being brought back into use as new homes for the local community.”