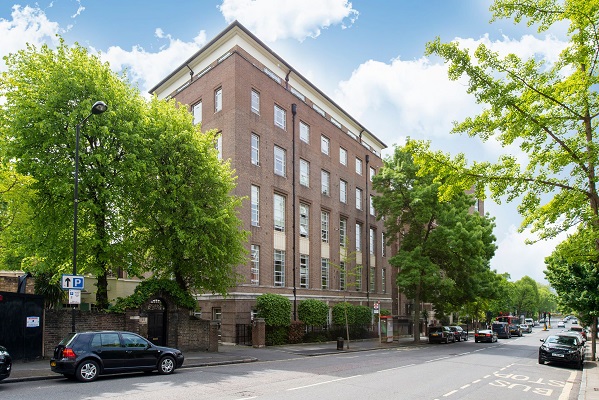 London Telephone Exchange turned into a luxurious apartment for sale  for £1.75m

Leading Central & North West London estate agent Aston Chase is delighted to announce the sale of a luxurious 1,321 sq ft two bedroom apartment in the historic Yoo Building at 17 Hall Road in St John’s Wood, which was originally the London Telephone Exchange, a vital piece of 1930s Edwardian-era telecoms infrastructure in the capital.

The newly refurbished two-bedroom apartment has a contemporary interior design that compliments the retained period features of the landmark building which include large floorplates, generous ceiling heights and quirky feature windows. 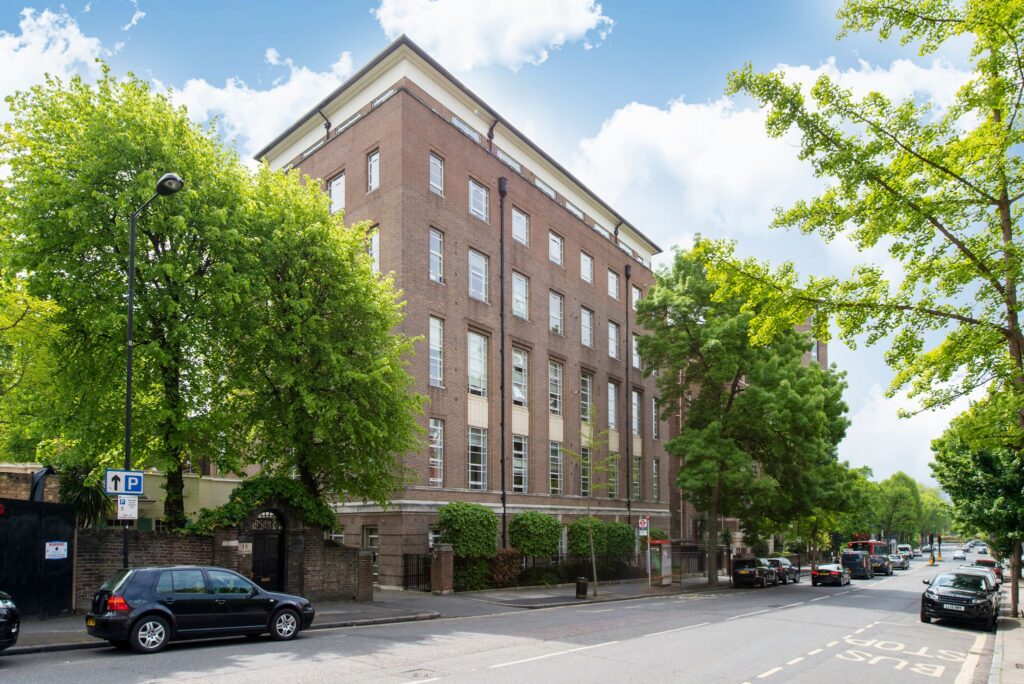 In a wonderful juxtaposition of eras, the modern apartment is situated on the first floor of what was once the London Telephone Exchange, built in 1937. Whilst the telephone was invented in 1870, it was not until the development of telephone exchanges in 1879 that larger volumes of calls could be made involving multiple callers.

From 1912 the UK had a unified telephone system able to place calls throughout the country. When the new London Telephone Exchange building was opened in 1937 it enabled large volumes of telephone calls to be reliably connected between London, the rest of the UK and countries around the world. The new exchange also allowed Londoners, for the first time, to be able to make emergency 999 calls, when 999 was dialled a buzzer sounded in the exchange and a red light flashed to draw an operator’s immediate attention. 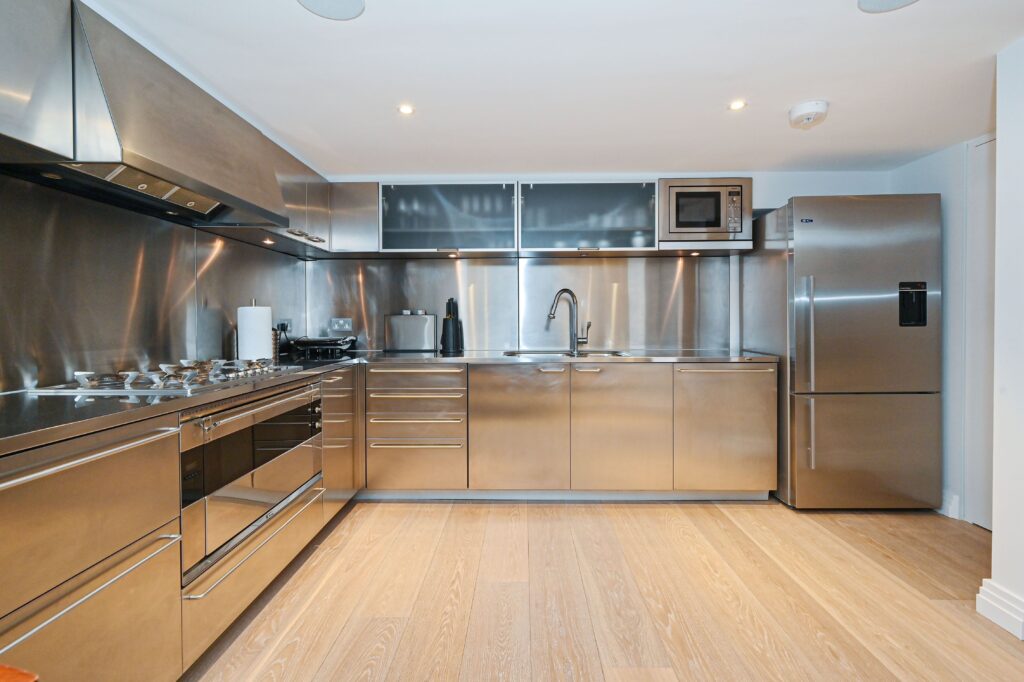 When senior politicians and members of the Royal family were making long distance calls via the exchange operators were instructed not to eavesdrop on the confidential calls. During WWII such was the importance of the London Telephone Exchange for military communication that firefighters, a search light and defence gun were posted on the roof of the building.

This truly unique building was renamed the Yoo Building and converted into spacious apartments in 2001 under the lifestyle brand YOO, by property entrepreneur John Hitchcock, and the world-famous French industrial architect Philippe Starck. 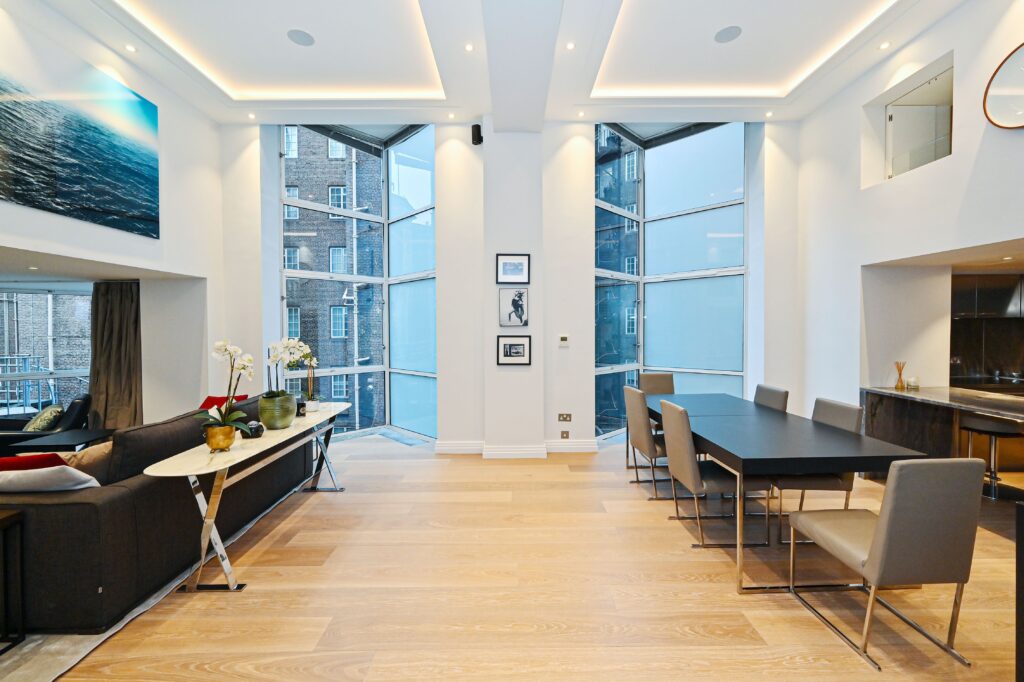 The Parisian architect is renowned for his wide variety of design work from residential interiors to boats. In 1983 the then French President Francois Mitterrand choose him to refurbish the presidential apartments at the Elysee and he devised the Asahi Beer Hall in Tokyo, the building with a giant flame on top.

As part of conversion of the London Telephone Exchange into luxury apartments Philippe Starck placed an iconic red telephone booth outside the main entrance to act as a window onto the past, showcasing the building’s telecoms heritage.

The high ceilings and vast spaces within the London Telephone Exchange, which was constructed as the Art Deco movement started to fade away and modernism was becoming established, have made for spacious apartments with mezzanine floors. 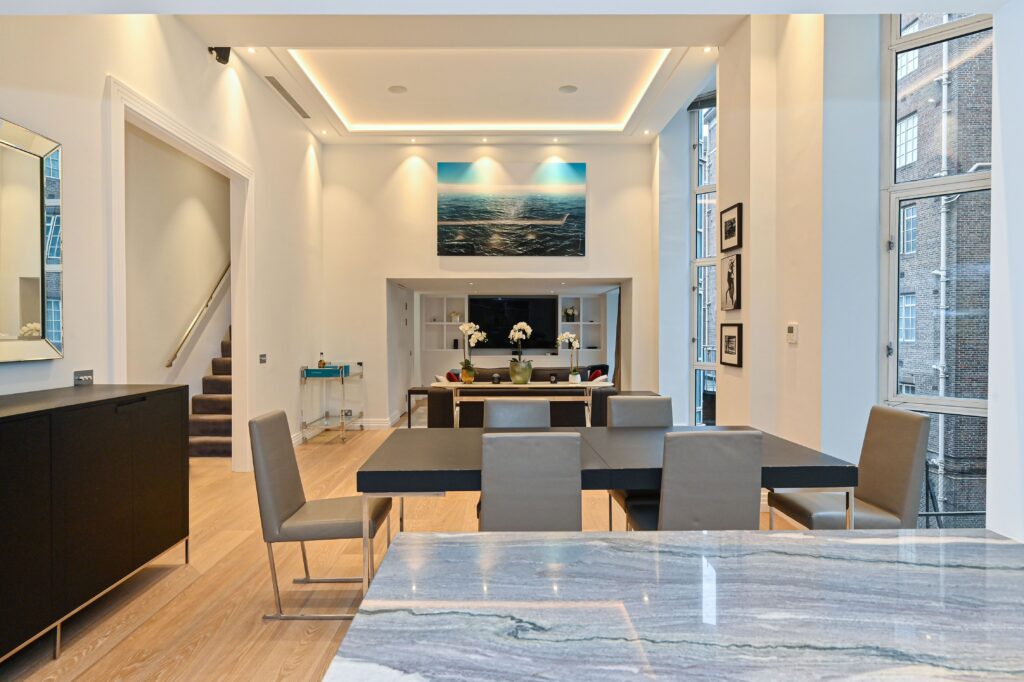 The two-bedroom apartment on sale is no exception. Complete with two mezzanine floors which house the bedroom suites, the apartment spans 1,321 sq ft with the main first floor providing a large 31 ft reception room which features soaring double-height ceilings, coffered ceilings with LED lighting and a triple series of floor-to-ceiling angled windows that create even more space and flood the reception and dining area, and adjoining open plan kitchen, with natural light.

The deep bay window in the principal bedroom, with an en-suite, is also angled, replicating the striking architecture of this split-level property. Art Deco geometric plasterwork on the ceiling in the dining area is picked out by subtle strip lighting, while down lights illuminate space for artwork on the walls. 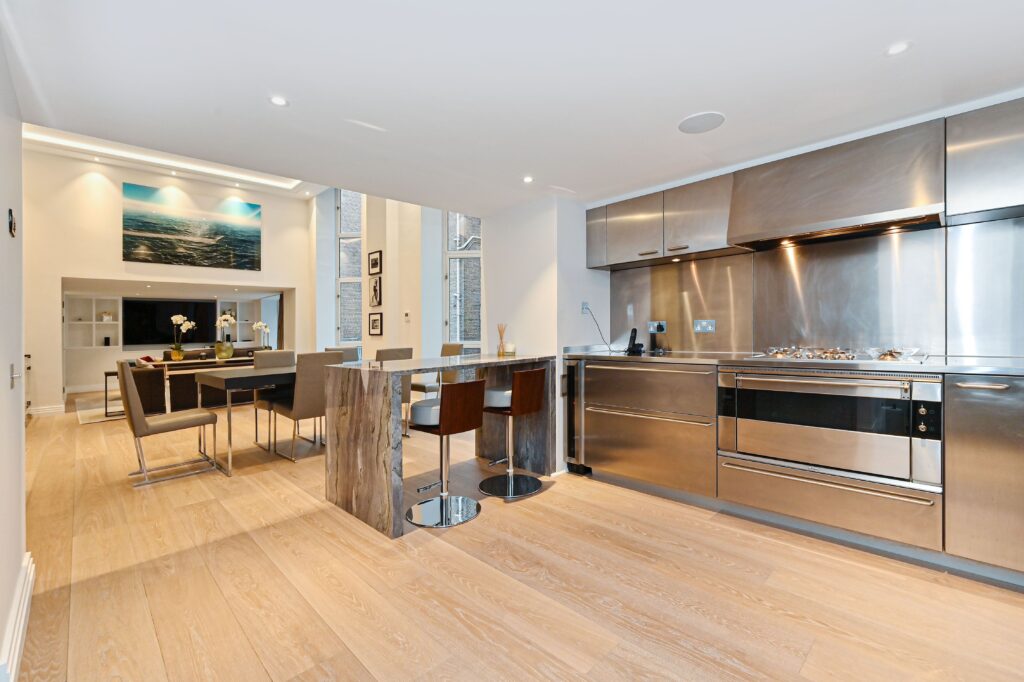 The fully fitted designer kitchen is a contemporary take on industrial Britain with steel kitchen units and worktops and a marble island/breakfast bar. This marble motif – off white with a grey vein, and the reverse – is then repeated in the bathrooms as well. The engineered timber wood flooring sets off this high-spec apartment, which also comes with a private car parking space and 24-hour porterage.

Mark Pollack, Co-Founding Director of Aston Chase said, “This historic 1930s telecoms building helped to make the UK’s first ever 999 calls possible and was the London hub where telephone calls were placed between Britain and its Commonwealth dominions. Style and history meet in this spacious modern apartment which is located equidistant between St John’s Wood and Maida Vale.” 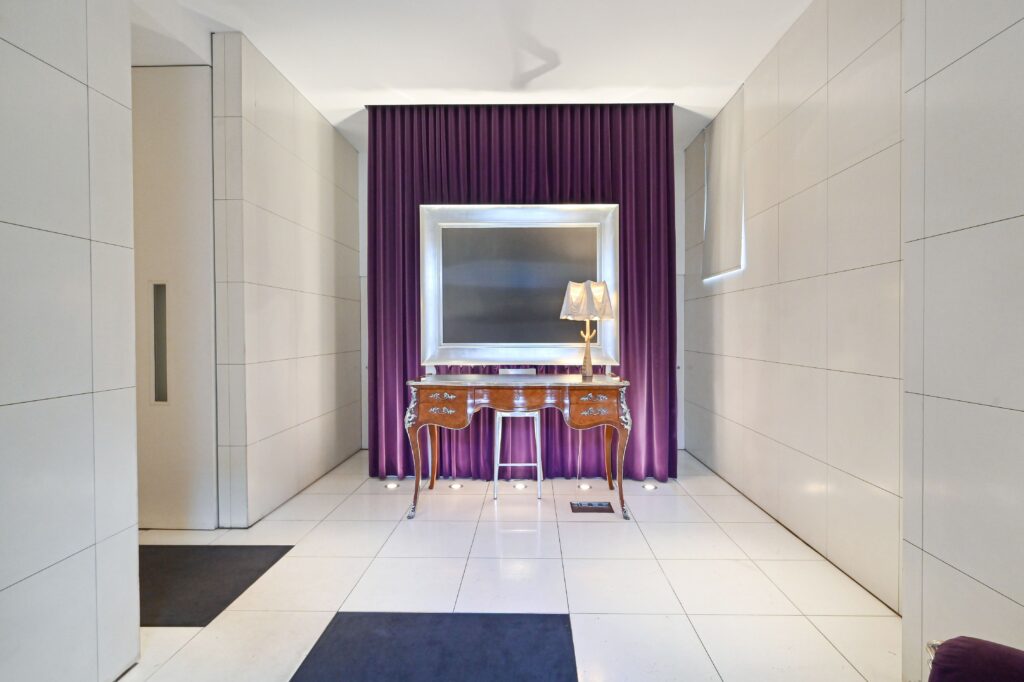 Craig Draper, Associate Director of Aston Chase added, “Within this incredibly spacious apartment there are touches of Art Deco style and early modernism, complemented by the high quality marble work in the bathrooms and the striking contemporary kitchen.”

The Yoo Building is situated on Hall Road in the heart of St John’s Wood. Hall Road bisects Hamilton Terrace, renowned for its Victorian architecture and famous residents – novelist Thomas Hardy and actress Honor Blackman are among the stars who have lived there. 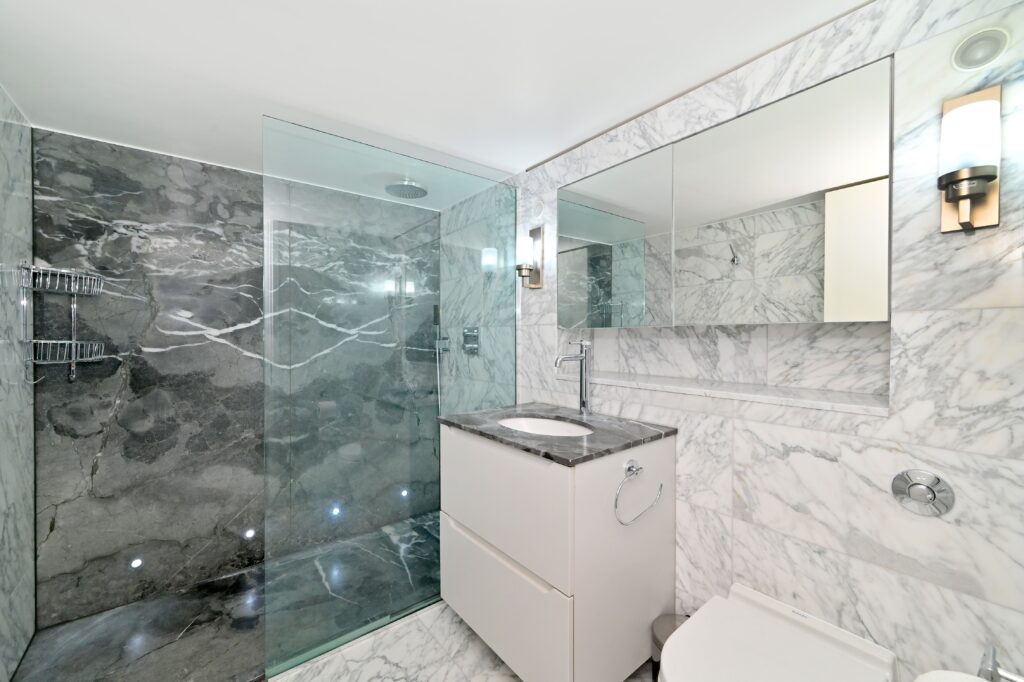 Just a few minutes’ walk away are the cafés and restaurants of Clifton Road in Little Venice, while