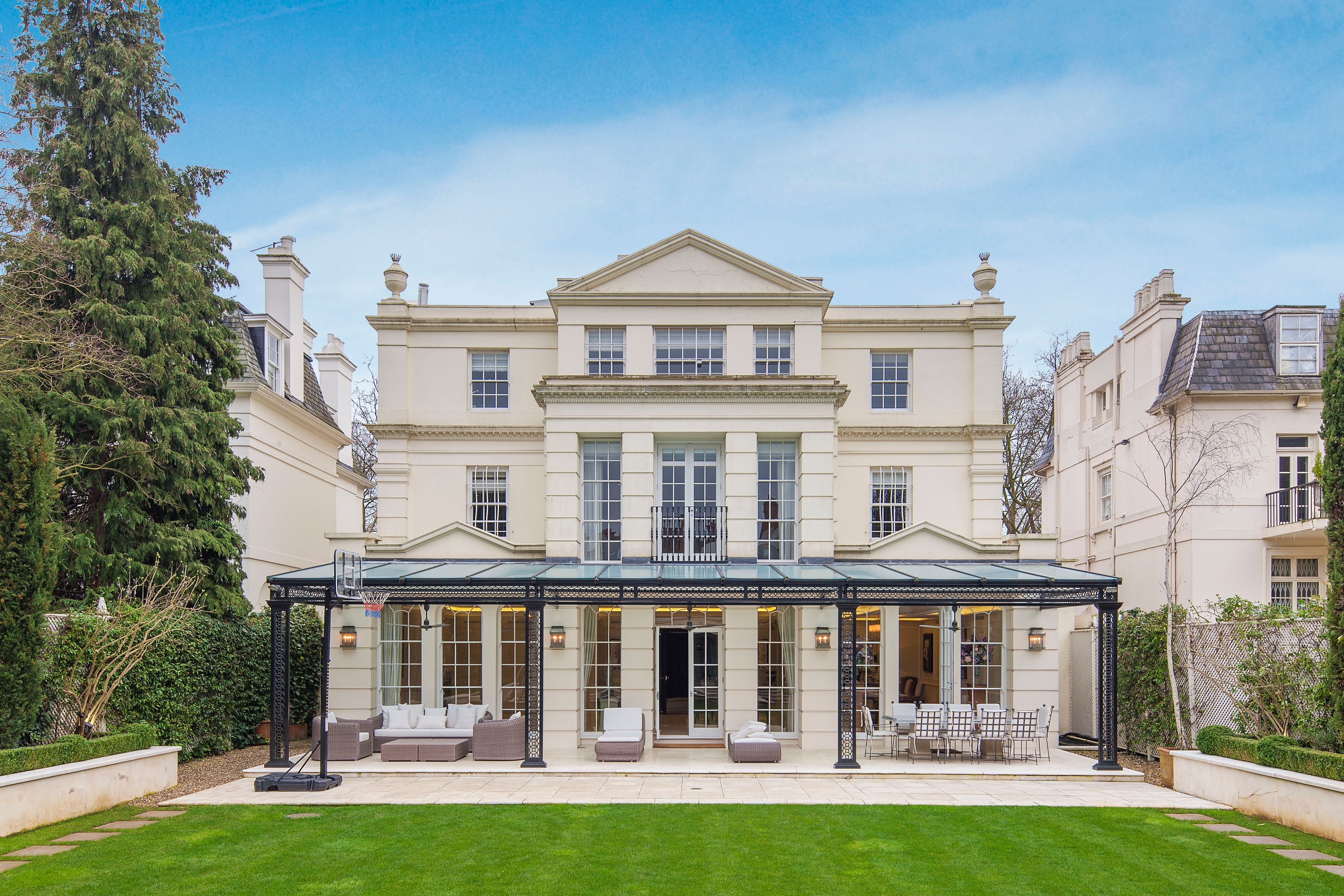 Aston Chase have just sold the Seifert mansion at 79 Avenue Road in St John’s Wood for close to the asking price of £13.95m, in due course the existing 5,216 sq.ft (484 sq.m) property will be demolished and replaced by a newly built mansion, potentially worth up to £35m once complete.

The existing house at 79 Avenue Road was built in 1954-1955 by architect Richard Seifert (1920-2001) as the London home of famous multi-millionaire Harry Hyams (1928-2015). Aston Chase reveal that the future redevelopment of 79 Avenue Road is just one of 12 mansions on Avenue Road, which are currently either under construction or recently completed, which have a combined market value of circa £500m. Aston Chase highlight that the luxury building boom on the street is indicative that Avenue Road has eclipsed The Bishops Avenue/Winnington Road as the premier luxury address in London north of Regent’s Park.

Aston Chase reveal that over the last few months there has been a flurry of ultra-high-net-worth buyers who have purchased existing, outdated “smaller” houses on Avenue Road, ranging from 5-8,000 sqft in size, priced typically from £2,500 to £3,000 sqft in value; for the opportunity to replace them with brand new mega-mansions typically 10-30,000 sqft in size, with commensurate values of up to £3,000 per sqft. In addition to 79 Avenue Road, which Aston Chase sold for £2,588 per sqft, the other mansion makeovers on Avenue Road include a refurbished and remodeled house; another rebuilt and recently sold for circa £30m, a third house recently sold for £22m, a period house replaced by a brand new 11,500 sqft mansion, another new mansion; an existing house demolished and being replaced by a 27,000 sqft mega-mansion and one that is presently being demolished with planning consent for a new mansion.

Other pipeline transformations on Avenue Road include an existing 5,628 sqft house sold for circa £17.35m, with planning granted to extend the property to just under 10,000 sqft; another currently for sale at a guide price of £10m with planning consent for a new 16,000 sqft mansion; another recently sold for circa £28.5m and another plot with a newly developed 17,000 sqft mansion. On Avenue Road there is also a vast double-plot which sold for circa £40.5m with a new 30,000 sqft mega-mansion currently under construction and finally a 27,000 sqft Romanesque “Bishops Avenue style” mansion currently valued at £70m.

Aston Chase highlight that 30% of the mansion makeovers on Avenue Road are speculative projects undertaken by ultra-luxury developers for open market sale, with the remaining 70% consisting of private client projects where the buyers have purchased the plots and are using specialist contractors to demolish and replace or extend their properties.

Aston Chase reveal that the projects on Avenue Road typically take 2 to 3-years to undertake, depending on whether planning consent has been obtained at the time of sale. Upon build completion, the end result is a new interior designed, super-luxury residence, predominantly valued between £30m to £70m. The new mansions have luxurious entertaining areas, VIP bedroom suites and leisure facilities including private cinema, gymnasium, swimming pool and spa. Many of the mansions have a lower ground floor and a sub-basement, in addition to a further dedicated floor for plant/machinery, resulting in them being considerably larger than is evident from street level.

Aston Chase say that there are several drivers behind the transformation of Avenue Road into London’s mega-mansion address of the moment. Firstly, Avenue Road is one of the few thoroughfares’ in St John’s Wood where buyers can purchase substantial land plots, from 0.25 up to one acre in size. Secondly the avenue is a short walk to both St John’s Wood High Street, Primrose Hill and Regent’s Park and within easy reach of the West End. In contrast, The Bishops Avenue/Winnington Road have become victims of traffic congestion and can no longer offer short journey times into the heart of London. In addition, the historic profile of The Bishops Avenue as a location for luxury houses and mansions has become diluted over the last five years as houses have been demolished and replaced by luxury apartment buildings.

Aston Chase observe that the vast majority of buyers on Avenue Road are families, purchasing for owner occupation.  Their Avenue Road home is their principal London home, but is invariably just one of a portfolio of homes they own around the world.

Aston Chase say that over the last 30-years the age and financial profile of buyers on Avenue Road has changed dramatically. The typical buyer is now aged between as young as 29, up to mid-50s and are more-often-than-not self-made business tycoons. Thirty years ago, the buyers were largely domestic UK local buyers aged in their mid-40s to mid-60s, many purchasing using inherited wealth. Aston Chase reveal that the rise in overseas buyers is because over the last 15-years the local landowner, The Eyre Estate, has sold the freehold interests to individual leasehold owners, opening the door to previously resistant international buyers, now willing to sink substantial funds into Avenue Road in the knowledge that their investment will be protected in the passage of time.

Mark Pollack, co-founding director at Aston Chase said, “The current building boom has transformed Avenue Road and elevated the profile of the address as arguably one of London’s most desirable destinations. In addition to properties officially for sale, others are often available on an ‘off market’ basis since many of the owners see their homes on Avenue Road as a tradeable asset, meaning that virtually every house is for sale at the right price, reflecting the entrepreneurial spirit of the owners.”

Pollack added, “Discerning buyers are drawn to Avenue Road because it is lined with low built houses of substantial value and runs into Regent’s Park. The generous plots lend themselves to trophy homes, giving buyers ‘a lot of bang for their buck’.”

Michael Sulkin, director (houses) at Aston Chase said, “Avenue Road has overtaken The Bishops Avenue and Winnington Road as the premier luxury address in Inner London, north of Regent’s Park. With the new mega-mansions being created it is undoubtedly one of London’s finest addresses appealing to the same calibre of buyers as the likes of Kensington Palace Gardens, The Boltons, Cornwall Terrace and Holland Park.”

Pollack said: “Despite ongoing political uncertainty, pent-up demand together with a weak pound and the perception that the market has bottomed out, appear to have lit the touch paper for ultra-high-net-worth dollar-based buyers. In many cases buyers have been monitoring these opportunities and the London market for some time and have finally swooped. “Ironically, despite Brexit and the underlying ongoing threat of another General Election, for the first time in over two years we have seen a spate of meaningful sales in highly desirable super prime addresses like Avenue Road and elsewhere across prime central London.”

Aston Chase highlight that the tree lined Avenue Road was originally built in the 1820s by local landowner Henry Samuel Eyre designed by architect John Shaw. The original Victorian houses on Avenue Road were home to members of the local gentry and successful self-made people including writer James Bickingham, the landscape painter William Collins and Herbert Spencer the philosopher. By the 1930s residents included film producer Sir Alexander Korda. Historically Harry Hyams, Sir Philip Green, members of the Saudi and Qatari Royal families and Lord Samuel have all resided on Avenue Road, whilst in more recent times the DNA of Avenue Road more resembles the Forbes Rich List, reflecting the global appeal of London and the recognition of Avenue Road as one of London’s premier addresses.

During the 1950s many of the five storey Victorian houses were demolished to make way for large post-war, low rise, “Hampstead style” residences. As values have been aligned to square footage these in turn have been replaced by capacious mansions with multiple levels below ground providing every amenity imaginable including spas, private movie screening rooms, wine tasting rooms, sushi bars and sunken garages able to accommodate up to 20 cars.

5% gifted deposits on offer this weekend at Taylor Wimpey’s...

A luxurious relaxing oasis in the middle to 24 hour...

There has been a significant rise in the number of...