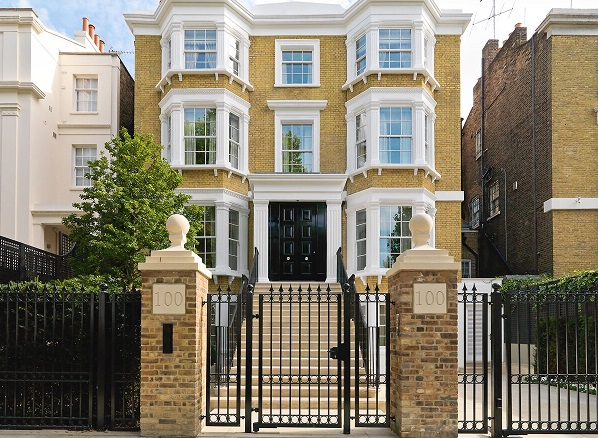 Offering 11,420 sqft of luxurious living space the seven bedroom double-fronted mansion at 100 Hamilton Terrace in St John’s Wood, originally the home of the founder of Lloyds Bank, has recently refreshed Los Angeles inspired interiors by designer Bill Bennette; bringing Hollywood glamour to London. The stately house is complete with one of the best 5-star hotel-like swimming pool, spa and leisure complexes ever built in the capital and is for sale via joint sole agents Aston Chase and Beauchamp Estates. The vast mansion at 100 Hamilton Terrace was built in 1890 and originally served as the London home of banker Henry Barnett, who founded Lloyds Bank. One of the country’s first multi-millionaire bankers, Henry Barnett (1815-1896), cousin of PM George Canning, was the principal partner of Barnett, Hoare & Co Bank which merged in 1864 with Hanbury, Lloyds & Co, creating Lloyds Banking Group. Enriched by the Lloyds merger Henry Barnett purchased 100 Hamilton Terrace which he and his wife Emily used as their London townhouse. Guests included the Marquess and Countess of Clanricarde, George Canning and Lord Randolph Churchill (father of Winston). The Barnett family also entertained at their country estate, Glympton Park near Woodstock, now owned by the Saudi Royal family. Fast forward to modern times and 100 Hamilton Terrace was purchased 10-years ago by the current owners. At the time the property was in need of substantial refurbishment which has been done to the highest standards. Over the last few years the house has been rented to a series of high-profile individuals before now being released for sale. The interior design scheme for 100 Hamilton Terrace was inspired by the opulent Los Angeles mansions of Delfern Drive and Sunset Boulevard and brings Hollywood glamour to London. Set behind pillared entrance gates the mansion has a gated driveway with parking for two cars and a manicured front garden with planting and hedging. The mansion is built in the finest London-stock brick with stone detailing with bays rising up both sides of the double fronted façade. The house offers luxurious accommodation over six levels arranged over basement, lower ground, raised ground and three upper floors. Across the entrance hall is a 12-seat dining room with Deco mirrored dining table, with an iconic picture of Hollywood legend Jack Nicholson above the fireplace. There is also a ‘His’ study and guest powder room on this floor. The lower ground floor provides the large open plan family kitchen with breakfast/informal dining area, a separate family room, ‘Hers’ study, children’s playroom and staff studio/bedroom. The voluminous kitchen has bespoke units and exceptional informal entertaining and dining space with two large skylights allowing natural light to cascade into the space and three separate sets of French doors opening onto the outside patio with wide stone steps leading to the large landscaped garden beyond. The entire first floor is occupied by the master bedroom suite which has two bay windows overlooking Hamilton Terrace and is arranged to provide a main sleeping area and lounge/day area. The central part of the bedroom has an incredible vaulted ceiling with bespoke Art Deco style chandelier. The suite is complete with his and hers bathrooms and dressing rooms. One can imagine Marilyn Monroe attending to her boudoir in this impossibly glamorous Deco-inspired principal suite. On the upper floors there are six further bedrooms and four bathrooms. Two of the bedrooms have ensuites with the other four bedrooms arranged so that pairs share an en-suite. Accessed via an Art Deco staircase, the basement level extends under the house and rear garden and is arrange as a luxurious leisure complex with a mirrored lobby and a pool room with Olympic-sized swimming pool bordered by lounge decks, cabanas and poolside cocktail bar and cinema screen. There is also a gymnasium, steam room and luxurious massage/treatment room. There is also a plush cinema room with it’s own cocktail bar and games room. The large landscaped rear garden has a sweeping lawn bordered by hedges and two avenues of boxwood trees. At the end of the garden is a timber decked entertaining area with loungers and al fresco dining area. Beyond the garden is a two storey guest house which has a sitting room, kitchen and dining room with three bedrooms above. The guest house has its own private entrance and is accessed either from the garden or Northwick Mews. “Perfect for a family or A-lister looking for an abundance of entertaining space and bedrooms this is one of the finest houses on Hamilton Terrace and one of the most outstanding homes in St John’s Wood.” Rosy Khalastchy, Associate Director at Beauchamp Estates said, “This magnificent mansion has substantial entertaining areas and the leisure complex is one of the best in a private residence in Central London. The guest house, like those in Los Angeles, has been designed to be good for either guests or staff. Bill Bennette’s striking interiors provide super-luxury, uncluttered interiors that are a fusion of Art Deco, Hollywood and contemporary influences.”

Final homes released onto the market at New...