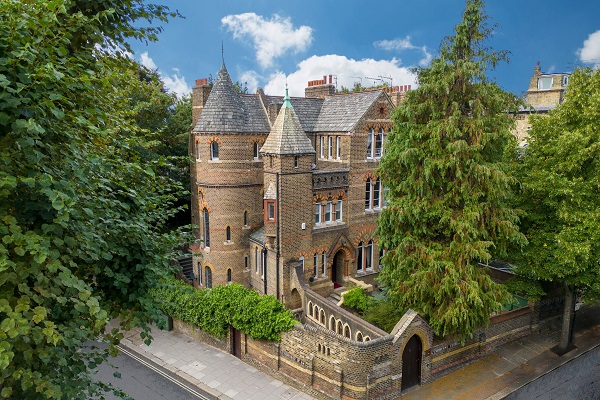 The reception/drawing room benefits from imposing floor to ceiling windows to either side, framing a central full height bay window ensuring that the capacious space is flooded with natural light, whilst providing access to symmetrical terraces, overlooking the rear garden.

Green and gold panelled walls and a white marble fireplace feed the grandeur of the room, which is partitioned by intricately detailed gold and green gilded arches (with the design extending to the gilded ceiling) complete with terracotta marble columns that offer depth, in addition to scope for a formal and informal sitting area.

The subsequent dining room (which can also be accessed via the hall) features its own vaulted arch ceiling, wood panelled walls, and a statement inscribed marble fireplace surround. Arched windows provide views to the front garden.

The lower ground floor accommodates an extensive, open plan family area and dining/kitchen with access to the garden. Additionally, there is an ensuite bedroom which would provide an ideal opportunity for live in staff.

A round stair turret ordained with a series of stunning stained glass windows leads to the first floor principal bedroom suite which is complete with a dressing room, private balcony and ensuite bathroom centred around a free standing circular bath. The first floor benefits from one further ensuite bedroom.

The second floor hosts three further ensuite bedrooms, one with access to a terrace with a tower view and a seventh bedroom/study which was formerly used as a chapel room and is brought alive by a striking original wall mural.

One and three Lyndhurst Terrace were built in 1864–1865 to the designs of John Burlison (Sir Gilbert Scott’s chief assistant) aided by Alfred Bell who was one of the pre-eminent makers of stained glass.

The products of Bells’ firm, Clayton & Bell, can still be seen in many houses and churches around England, a number of examples of which are evident in Hampstead Parish Church where Bell was a devoted parishioner. John Burlison was Bell’s father-in-law, and, as first built, the house contained residences for both families with an internal door between.

However, Burlison died in 1868 and Alfred Bell’s family took over the whole building and called it Bayford House. Bell then employed another Gilbert Scott pupil, Charles Buckeridge, and the two men produced the extensive and ornamented gothic interiors. Alfred Bell died in 1895 and his combined Bayford House was divided into two again.

The artist and author, Ernest Goodwin bought it around 1931 and renamed it Old Conduit House in 1934 referring to the nearby Shepherd’s Well, he lived there until his death in 1944.

His widow remained living in the house until 1994 with the upper floors of Old Conduit House divided into bedsits in the 20th century. The novelist Fay Weldon was a frequent visitor and wrote about the house in her 1995 novel Splitting.

Old Conduit House now exhibits the bold geometric forms of the masculine Gothic of the 1860’s, incorporating a round stair turret, a square corner turret, a triangular oriel and lively polychrome window heads.

Internally, the building retains much of the elaborate interiors created by Bell and Buckeridge including stained glass and stencil decorations.

Lyndhurst Terrace was originally built by Davidson in the first half of the 1860’s and called variously, Rosslyn Park or Windsor Terrace. The latter name was chosen because Windsor Castle was visible from here across the undeveloped acres of the Conduit fields. The present name came into force in 1939.

The property is situated on the southern side of Hampstead Village on the borders of Belsize Park. The heart of the Village and Hampstead Underground Station (Northern Line Edgware branch) is situated within 650 metres.

True to its medieval heritage, Hampstead has retained its quaint charm and the many lanes lined with eclectic shops and independent cafés create a rural ambience that is unique considering its proximity to the centre of London.

Hampstead further provides opportunities for those looking for a taste of the country, with attractions such as Kenwood House (an outstanding English Heritage Site featuring expansive grounds with tranquil landscaped gardens) as well as the 800 acres of wilds to explore in Hampstead Heath – London’s largest ancient parkland, with spectacular views over the capital’s skyline.

Arron Bart, Lettings Director at Aston Chase told LondonLovesProperty.com, “This opulent family home with such an illustrious history really is the perfect plot for families with young children with big imaginations.

“An unusually modern open plan living space on the lower ground level provides ideal space for flexible family living, and with the 80ft garden and neighbouring Hampstead Heath, there is a real sense of spaciousness. Old Conduit House presents an exceptional opportunity to experience life in your own mini castle!”

Mark Pollack, Co-Founding Director at Aston Chase added, “This unique and historic property is a real gem in the heart of one of London’s most sought-after areas.

“An unusually high concentration of actors, artists and writers call Hampstead home and bankers, entrepreneurs and celebrities alike flock to the area attracted by the exceptional schools, Hampstead Heath and the village vibe with its bustling high street of shops, cafés, restaurants, art galleries and markets.”

Lyndhurst Terrace is well served by public transport with numerous bus routes on both Fitzjohn’s Avenue and Rosslyn Hill providing easy access to the West End whilst Hampstead Underground Station (Northern Line) is only an 8-minute walk away.