Home Residential Property Barratt Homes: Imaging the population of the UK in just a single street

Barratt Homes: Imaging the population of the UK in just a single street

Research into the current distribution of housing type and value has highlighted the differences in the make-up of the UK’s residential housing.

The analysis, undertaken by the UK’s largest housebuilder Barratt Homes, envisions regions of the UK as just a single street, breaking down the population into four housing types; terraced, detached, semi-detached and flat/maisonette. It also attributes current average values to each property type.

If the population of the UK were condensed into just a single street, a third of us would live in a semi-detached house worth £207,000. 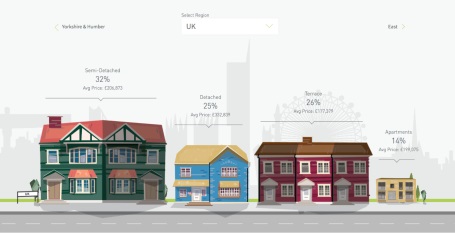 The remaining 25 per cent of the population would live in a terraced home with an average value of £174,000, but the value and distribution of terraced properties varies dramatically by region. An interactive version of the single street concept, highlighting each individual region, is available on the Barratt Homes website.

For example, in a street representing the North-East, almost a third (31 per cent) would live in a terraced house, but its average value would be £98,680, almost half the national average. This compares to a London street, where a terraced house would be worth over five times more (£494,851), housing 27 per cent of residents. In the North-East, even the average value of all the four property types would be just £123,234.

The make-up of London’s property landscape is dominated by flats, with 43 per cent of Londoners living in one, the most of any region in the UK. In fact, barring Scotland, where 29 per cent of properties are flats, the average for the rest of the country is just 9.8 per cent. 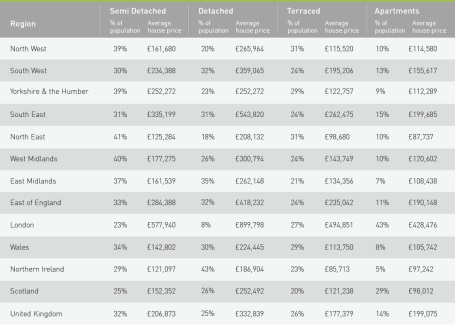 Unsurprisingly, London’s flats are also significantly more expensive than the rest of the country. Their average price is £428,476, a figure more than four times the average flat in Northern Ireland, which is valued at just over £97,000.  Excluding London, the national average is just £127,000, highlighting the weight London carries in both the distribution and average value of property.

A spokesperson for Barratt Homes said: “Our research reveals what the UK in a single street would look like but also how this picture differs across regions, both in the type of houses and, of course, the price. It’s fascinating to see the diversity of our housing stock and hopefully useful to show buyers what the property ladder looks like in their area.”