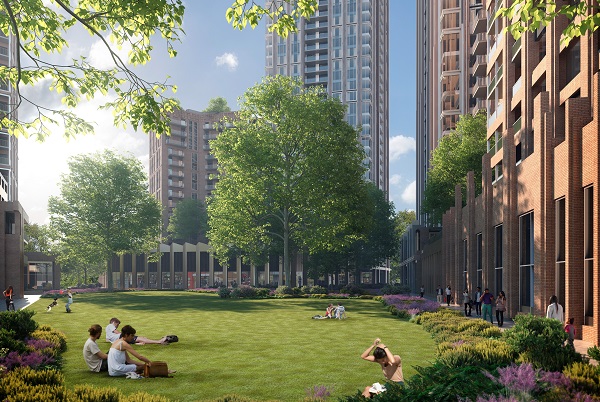 Leading South and West London developer Avanton has shown further commitment to the London Borough of Southwark’s Area Action Plan by acquiring the 1.6-hectare (4 acre) SGN Gasholders site on Old Kent Road. Avanton is proposing to transform the historic Gasholders site into a new £230m  (GDV) mixed use regeneration project which will remediate the industrial land and provide hundreds of new homes including affordable housing, open space and over 50,000 sqft of light industrial commercial use, supporting the Council’s Healthy Living strategy. Plans for the Gasholders site are still at a very early stage but will include the retention of the 48.8-metre-high main Grade II listed Victorian gasholder, during the Victorian era the largest in the world, originally built in 1879-1881 by George Livesey. The gasholder frame will be transformed into a striking art-like architectural feature within the gardens and parkland of the new development. Within the skeleton of the gasholder there are plans for a pavilion, water features and gardens, providing a central feature for the residential and commercial buildings within the new development. The Gasholders site was originally part of the Old Kent Road gasworks, owned by the South Metropolitan Gas Company, and built in 1829-1833 by Chairman Thomas Livesey. In 1848 Thomas’s son George joined the company and helped to reconstruct the complex which became the most important gasworks in London, producing a gas supply of 12,520m cubic feet per annum. The gasworks were nationalised in 1949 and ceased production in 1953 although the gasholders continued to be used for storing gas into the 21st century. Avanton now plan to regenerate the redundant site with a new mixed use scheme. Alongside the Gasholders site, Avanton has already gained planning permission for 1,152 new homes providing 40% affordable housing and a sports centre on the 1.36 hectare (3.3 acre) Ruby Triangle site which the developer plans to launch in 2020.

Designed around a large landscaped courtyard garden, the Ruby Triangle development has been designed by leading award-winning architectural practice Farells. Avanton’s third site at 651 Old Kent Road, the Carpetright scheme, is also in the planning system which will provide a further 262 units, of which 40% will be affordable homes. This provision by Avanton of over 2,100 new homes, commercial and public realm improvements on three major strategic development sites makes Avanton the largest investor and developer on Old Kent Road. The bespoke developer has become an emerging leader in inner London regeneration with a portfolio of residential-led and mixed-use schemes across two development sites in Battersea, the trio on the Old Kent Road and another major site in Richmond. Omer Weingberger, Managing Partner at Avanton said, “Avanton’s acquisition of the Gasholders site on Old Kent Road highlights our commitment to investment and regeneration in the London Borough of Southwark. The £230 million (GDV) Gasholders scheme will result in a significant contribution to the local community through the provision of homes, a substantial commercial offering and public open space. Our trio of projects will help to spearhead the transformation of Old Kent Road into a new town centre for London. Alongside this there is the planned extension of the Bakerloo Line with two new stations on Old Kent Road.” Marc Pennick, Partner at Avanton said, “Avanton is the largest investor and developer on Old Kent Road, underlining our strong commitment to the regeneration of this famous address. Our pipeline portfolio of homes and commercial premises on Old Kent Road will provide good investment opportunities for discerning investors and end users. The location is price-competitive and there is the potential for uplift in values due to the regeneration and the Bakerloo Line extension.” Old Kent Road is undergoing a £10.7bn regeneration with new homes, and workspace for up to 10,000 new jobs, commercial, retail and leisure facilities. The location is equidistant to Central London like other locations such as Clapham, Islington and Pimlico.