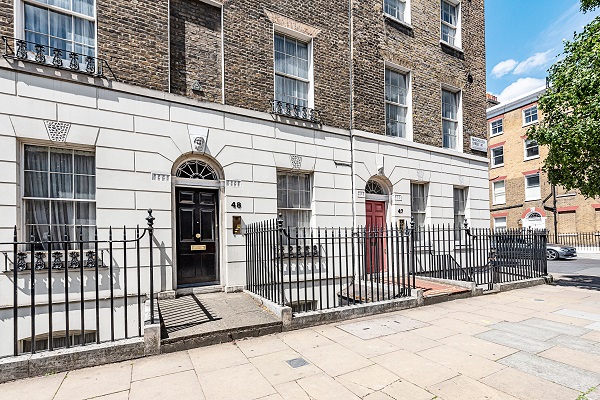 An elegant 5,043 sq.ft.(468.51 sq.m.) eight bedroom townhouse on Manchester Street in London’s Marylebone, owned by Victorian retail lawyer Christopher Bicknell and in the 1960s and 1970s let to famous musicians, is for sale. It provides the West End’s best “fixer-upper” opportunity, with existing planning consent for remodeling into an ultra-luxury residence: for sale via sole agent Beauchamp Estates. Beauchamp Estates highlight that the value of the current property could be significantly uplifted through refurbishment and has the benefit of an existing planning consent for remodelling into an ultra-luxury family residence. Currently valued at £9.75m, the remodelled and refurbished house could be valued at up to £12m. Once remodelled the lower ground floor of the house would provide a private cinema/media room, with doors interconnecting with a gymnasium. Adjoining the gymnasium would be a shower/changing room. Off the media room there would be a utlity room, which could alternatively serve as a cocktail bar/servery for entertaining guests. The lower floor would be complete with a guest bedroom suite, with ensuite, with glass sliding doors opening onto a lightwell patio. On the ground floor there would be an entrance hall, formal dining room, kitchen and breakfast room, interconnecting with a family room. The kitchen would have a glass conservatory-style roof allowing sun to cascade into the living spaces.

Sliding glass doors from the new family kitchen would open onto a rear terrace, with glass flooring illuminating the sunken patio below. The library/sitting room and a guest cloakroom complete the accommodation at ground level. On the refurbished first floor there would be a magnificent interconnecting double reception room spanning the entire frontage of the house, along with a study and guest cloakroom. The new master bedroom suite would occupy its own private floor on the second level offering a principal bedroom, walk-in dressing room and His and Her bathroom suites. On the top floor there would be three further bedrooms (two with ensuites) and a family bathroom. Beauchamp Estates highlight that the Georgian house has a varied history. The street was named after local owner the Duke of Manchester and the house was built in the 1790s under the auspices of Viscount Portman and family. In keeping with Georgian elegance, the four storey townhouse has an understated brick façade with white stone render at ground level. Retail law, which Bicknell specialised in, is based on English historic legal customs, known as “tort law” (righting wrongs), which date back to Roman law and the origins of Oxford Street, which was built by the Romans, when it was known as Via Trinobantina. Via Trinobantina served as an open-air market and in Roman times, people stealing goods, or vendors selling rotten food, could be flogged or hanged. By the Victorian era it had been established that a retailer had a legal “duty of care” and from 1796 patents (intellectual or product property rights) could be taken out on all manner of retail goods. John Lewis, the founder of John Lewis on Oxford Street

Advising retailers on buying houses and turning them into shops, issuing patents and dealing with shoplifting prosecutions kept Bicknell & Co extremely busy. The firm advised retailers such as John Lewis (1936-1928), the founder of Oxford Street’s John Lewis store, which opened in 1864 as a small drapery shop. Bicknell often agreed deals with clients in his townhouse, so it is possible that the leases on some of Oxford Street’s most famous shops were originally founded in the Manchester Street property. Fast forward to the 1960s and the house was adapted and used to provide first rented rooms and later staff accommodation – hence the current large number of eight bedrooms. In the 1960s and 1970s rooms in the house were rented out by local neighbour Ken Pitt, who owned an adjacent flat at 39 Manchester Street. Ken Pitt (1922-2019) was a talent manager and publicist who managed the career of leading musicians during the 1960s and 1970s with clients included David Bowie, Danny Purches and rockband Manfred Mann. Ken would house young up-and-coming artists at his flat or rent rooms for them in the adjacent property now for sale. In the late 1990s the house returned to private ownership and accommodation, which remains its current status. Jeremy Gee, Managing Director of Beauchamp Estates said, “This large family house in the heart of Marylebone has a varied history, originally owned by the leading retail lawyer of the Victorian era who helped to create Oxford Street as it is today, during the 1960s and 1970s rooms in the property were rented out to young musicians who would later become famous household names.

“Now it provides a discerning end user buyer or investor with a unique opportunity to remodel it into a luxurious contemporary family home, complete with a lift, cinema and home gymnasium.” Alex Bourne, Director of Beauchamp Estates (Marylebone office) said, “This large and charming house on Manchester Street is the West End’s best “fixer-upper” opportunity and properly done, the remodelled and refurbished house could be worth up to £12m, a significant uplift on its current £9.75m valuation.

“Refurbishment would bring balance to the accommodation. The legacy of its history as a rental investment and staff accommodation means the house has a lot of bedrooms, however a redesign would create a lot more reception and entertaining space, alongside leisure facilities on the lower ground floor.

“Remodelling would create a very practical yet luxurious family house in the heart of Marylebone.”