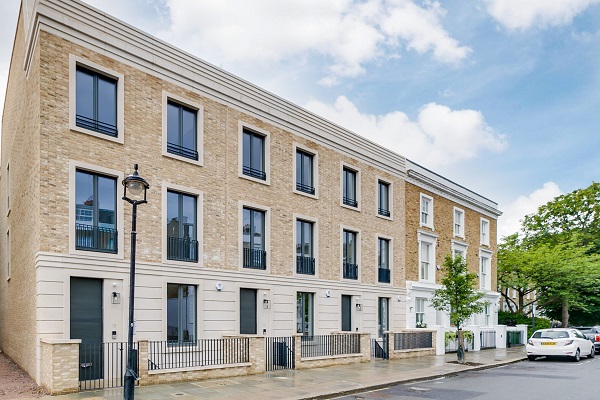 US tenants drive demand for London’s luxury build to rent

Aston Chase have launched Blenheim Terrace, the first ultra-prime build-to-rent scheme in St John’s Wood, providing a terrace of luxurious five bedroom townhouses, each 4,025 sqft in size, providing premium residences for affluent tenants. Driving this demand are a rising number of American banks, financiers and other corporates who are enhancing their presence in London in anticipation of a Post-Brexit USA-UK trade deal, and as a result are renting and furnishing large houses and mansions in St John’s Wood.

With design and specification by award winning London-Miami interior designer Natalie Miyar of Natalia Miyar Atelier the new build-to-rent scheme at Blenheim Terrace provides three newly constructed townhouses with contemporary interiors set in the heart of St John’s Wood. It is one of the first ultra-prime build-to-rent schemes to be launched in Central London.

Currently the only new build houses available to rent in St John’s Wood, each townhouse provides 4,025 sqft of luxurious accommodation over lower ground, ground and three upper floors, with a passenger lift and staircase connecting all five floors. Each townhouse benefits from an abundance of outside living space including a rear patio garden, various terraces/patios and ornamental balconies.

The classically inspired townhouses have large rooms, high ceilings throughout and all the modern conveniences of a luxury home including comfort cooling, underfloor heating and state-of-the-art home entertainment and security CCTV/alarm system. In each townhouse the family kitchen, breakfast and living room is on the lower ground floor with a designer fully fitted kitchen with Oak woodstrip flooring, wood finish base units, white stone worktops and integrated appliances. Floor-to-ceiling glazed doors open onto the terraced patio garden which has been designed to provide and outside living/entertaining space.

The principal bedroom suite has its own private floor on the first floor with the large bedroom benefitting from two sets of modern-style French doors opening onto ornamental balconies. There is an extensive walk-in dressing room lined on both sides with built in shelving and wardrobes and the suite is complete with a main bathroom with bespoke-design stone parquet floor, freestanding sculptural bath, walk-in shower room and twin vanity unit with fitted mirrors and feature wall lights. The principal guest suite occupies the entire on the top (third) floor of the house and has two private rooftop terraces, walk-in dressing room and day room and ensuite bathroom. There are two further bedroom suites, both with ensuite bathrooms, on the second floor, with the fifth bedroom suite, with ensuite shower room, opening onto a private patio on the lower ground floor.

Aston Chase highlight that this is the first ultra-prime build-to-rent scheme to be launched in St John’s Wood and forecast that it will provide a blueprint for similar purpose-built luxury rental projects in the district in the future due to strong tenant demand. Prior to the scheme even being completed, one of the three townhouses was rented off-plan to an American investment bank providing accommodation for an American financier and his family relocated from the USA. Now the second townhouse has been released to the market, with the final townhouse scheduled for a later launch.

Aston Chase highlight that the ultra-prime lettings market in St John’s Wood is buoyant at present. For the first six months of this year, lettings deals, for homes priced above £3,000 per week, are up 25% on last year. The highest demand is for properties priced from £4,000 to £10,000 per week, with tenants wanting large family houses of between 3,000 sqft to 6,000 sqft in size, ideally newly built or newly refurbished.

Aston Chase reveal that 50% of the tenants in the St John’s Wood premium lettings market are American expats, working in banking/finance in the City of London or Canary Wharf. The properties are often rented by the expat’s bank, financial organization, corporate employer or private equity firm’s name. The American tenants are typically aged in their mid-30s to early-50s, couple, with 2-3 young or teenaged children. Another 30% of ultra-prime tenants in St John’s Wood are from Europe, with the remaining tenants (10%) originating from non-EU countries. Aston Chase reveal that 80% of the American expats let the properties unfurnished, with the remainder seeking ‘turn-key’ dressed residences. Many Americans use international firms like Cadogan Tate and Abels to transport their furniture and possessions to London from the USA, however many families will also spend £30,000 to £50,000 per year on a furniture rental package from firms such as Milc and Camerich, with the wealthiest expats spending £100,000 to £200,000 per annum on renting furniture, artwork and other home furnishing items.

Aston Chase observe that several American companies are the in process of opening new HQs in London, which is helping to drive staff relocations to the UK capital. Goldman Sachs has just opened a new £1 billion European HQ in the Square Mile for 6,000 staff; Facebook is opening a third London office, with the trio housing 3,000 staff; Warner Music has opened a 500 person office at 27 Wrights Lane; with three new UK HQs opening in Kings Cross – Nike with a new 60,000 sqft HQ, Google a 4,000 person HQ and Youtube with a 20,000 sqft HQ. Aston Chase highlight that American families like St John’s Wood because of The American School in London on Waverley Place, which was founded in 1951 and has 1,350 pupils where one or both parents need to hold a US passport. The Jubilee Line link provides the financiers with easy access to the City of London, Canary Wharf and Mayfair, which is popular with private equity firms.

Other attractions are the proximity of the nearby American Ambassador’s residence at Winfield House in Regent’s Park, and the St John’s Wood Women’s Club, which is very popular with American expats.

Aston Chase’s findings are complimented by figures from United Nations: International Migrant Report which shows that there are over 197,000 American expats living in the UK, of these 173,470 live in London and the Home Counties with St Johns Wood, South Kensington and Notting Hill being the top addresses.  The US Government Nationality Report: Americans Abroad shows that the typical US expat in the UK is 42 years of age, with 66% being married/relationship, and the largest group (40%) being in the top 10% income group working in banking/finance. Mark Pollack, Co-Founding Director of Aston Chase said, “The build to rent sector in London is substantial, with over 32,785 purpose-built homes across the capital, however the vast majority of this market is starter and middle market homes built by volume developers or landlords. The luxury build to rent sector is still in its infancy, and this is why Blenheim Terrace, which is the first purpose-built bespoke scheme of its kind in St John’s Wood, will provide a blueprint for similar purpose-built luxury rental projects in the district in the future due to strong tenant demand.”

Ben Sloane, Lettings Director of Aston Chase said, “There is a sustained appetite from wealthy overseas tenants for high quality new homes, which they are choosing to rent for 3-4 year periods. Over the last 12 months we have seen a big spike in American families involved in banking and finance being relocated to London and we suspect that this is because American banks, financiers and other corporates are seeking to enhance their presence in London in anticipation of a big Post-Brexit USA-UK trade deal.

“We have seen a wave of US companies announcing office openings in London and American firms and expats asking about renting homes in London. As a result of all this activity, over the next 2 to 3 years we are likely to see a significant expansion in the number of luxury build to rent schemes launched in St John’s Wood and surrounding districts.”

Build to rent industry can save £45.5 million with furniture...

Build to rent planning applications increase by 52% in pandemic...

Build to rent is leading the pet rental revolution

With landlords feeling under siege, Build to Rent (BTR) may...