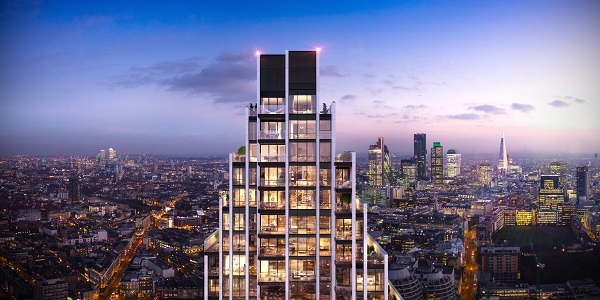 The Atlas Building opens its doors to their first residents

This summer saw the on-schedule completion of Tech City’s tallest residential tower, The Atlas Building alongside the arrival of its first residents. The new East London landmark, which rises 152-metre above the city, represents Rocket Properties’ first residential venture, and follows the successful delivery of a number of mixed-use schemes across the Old Street area. The landmark tower, located just moments from Old Street roundabout, is now almost 95% sold, with just a handful of two and three-bedroom apartments remaining – highlighting the increasing demand for homes in the area. Hackney was recently revealed as the most in-demand London borough (according to Rightmove), with purchasers drawn to the area’s ever-growing lifestyle offering, as well as its proximity to the City of London and the many creative and tech start-ups which call the neighbourhood home. A striking new addition to the skyline Andrew Hawkins, Director, Rocket Properties, comments: “Since its inception, The Atlas Building has been at the forefront of the transformation of Old Street. The delivery of the building, on-time, is testament to the innovative vision for this new landmark, as well as the local area as it increasingly becomes a highly desirable destination not just to work, but also to live and enjoy.

“Located at the apex of the financial centre of the City, and the tech and creative areas of Shoreditch and Old Street, it’s no wonder the building has seen global interest from buyers who want a home in the heart of one of London’s most exciting destinations.” In June, prospective buyers had the first opportunity to step inside the building following the unveiling of a spectacular 31st floor show apartment created by Design Haus Liberty.