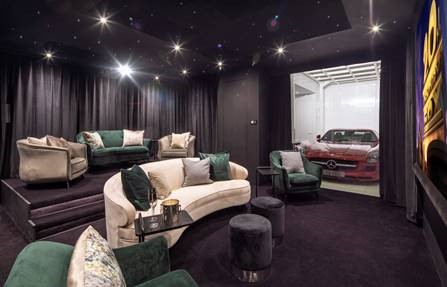 Architecture and interior design practice gpad london has finished the complete refurbishment of an Edwardian five-bedroom house in Wadham Gardens, Primrose Hill. The dated and dilapidated house has been transformed into a highly desirable, luxurious dwelling with an elegant mezzanine library, a modernist-inspired stained glass window, artisan-made chandeliers and a basement extension with a car dock, cinema, swimming pool and gym. All bedrooms have ensuites and the top floor can be divided into two suites with a concealed partition. Wadham Gardens originally had two ground floor reception rooms, which were timber-panelled in the 1970s. The flow has been improved by connecting the spaces with a mezzanine library which has been built above an opening between the rooms. The new staircase to the mezzanine, designed and installed by Wilder Creative, forms a sculptural piece of art in the corner and a focal point between the two rooms. A roof light floods the living space below and an artisan-designed chandelier adds eye-catching detail. A three metre-high stained glass window floods the brand new central staircase, which replaces three remote individual staircases. The original, garish 1970s window has been replaced by a design inspired by a leadlight piece seen in a Japanese museum by gpad’s Technical Director Jeremy Wiggins. It was handmade by Tenby & Penny Co. Ltd in Walthamstow Village. The staircase handrail is entirely made of timber, spray painted by a classic car specialist to achieve an opulent sheen. Wood flooring throughout the house is made of Merton Oak. Originally a coal cellar, the newly extended basement has high ceilings to give it the same feel as the rest of the house. It includes a cinema, car dock, pool, gym and steamroom, and a dramatically lit walk-in wine cave. Behind a frameless glass wall, the wine cellar is a design feature which allows for the display of an impressive collection of vintages. The car dock elevates up to the driveway and enables the occupier to showcase their vehicle to visitors. Accompanied by a steamroom and an overlooking gym, the swimming pool measures a generous 4x10m, with a Jacuzzi and a staircase connecting it directly to the garden. The extended basement also includes a plush 8-seater cinema with sparkling LED lighting, a guest bedroom with a marble ensuite, a two-storey plant room and an AV room for controlling technology throughout the building. To bring the outside in, new 20mm frame glazing by Sky-Frame was specified for the back wall of the garden-facing kitchen. Replacing the old-style casement windows, this ensures the occupiers can enjoy their garden even from indoors. gpad decided to keep the unusual, low yet wide window by the sink. The interplay between the window and the rectangular elements in the kitchen – the joinery, dining table and breakfast bar – combined with the natural textures in earthy shades, give the room a sense of movement.

Jeremy Wiggins says: “In this line of work it is a little heartbreaking to see a beautiful period house fallen on hard times. The best reward comes when you can make it fit for a family to live in whilst supporting local artisan makers in the process, such as the Walthamstow-based family business who made the stained glass window. The project was not without its challenges, however – a Network Rail tunnel three metres away from the basement extension forced us to rethink the basement plan, which serendipitously resulted in a more efficient layout.”

Owner Adam Andrews explains: “This is not just another ostentatious house with a mega basement. It would have been far easier to knock down a building and start from scratch than the riskier and more detailed process of holding up an existing building whilst putting a basement in. From the outside it’s lovely, Edwardian, double-fronted and with all original features kept. Yet when you come in you have all these things you’d find in a house with an eight-figure price tag. I especially love the carlift; you just press a button to lift a curtain, and you see your beautiful classic car behind a glass, like a museum piece.”