Its retail rents are breaking records at £1,000 per square foot. What’s driving Mayfair’s headrush of super-luxury? Will it last? And are commercial property prices squeezing out Mayfair’s traditional business residents?

If you’ve played Monopoly recently, you might have noticed how the magnificent Mayfair doesn’t feature any more. Back in July, it was bumped off by the posh Kensington Gardens, reflecting a “shift in power”.

But soon the boardgame makers might want to reconsider their decision, and put Mayfair back in the game.

Why? Because Mayfair is flexing its retail rental and commercial property muscles like never before.

Italian luxury brand Salvatore Ferragamo this month signed up for a Bond Street space at nearly £1,000 per square foot, the UK’s most expensive retail rent paid in history. And French luxury brands are queueing up for the opulent postcodes of Mayfair. 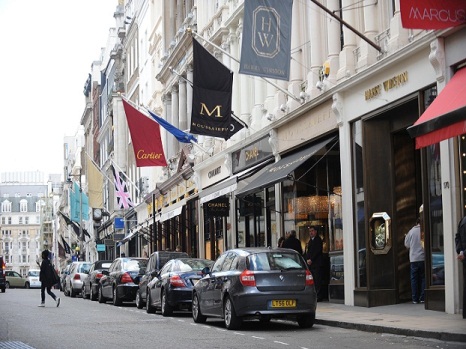 Bond Street’s supremacy as the UK’s most expensive shopping street justifies skyrocketing rents that luxury brands don’t mind paying. This is where the French fashion harbingers are always at loggerheads to get the attention of the well-heeled shoppers.

Just last week, Chanel was hoping to get planning approval from Westminster for an all-singing, all-dancing new shop front to pit itself against the jazzy retail face of its French foe Louis Vuitton.

Rents on nearby Oxford Street are on average only £200 per square foot, by comparison, and Marylebone High Street is around £225. Salvatore Ferragamo is paying five times that to be on Bond Street.

Cushman & Wakefield predicts that Bond Street rents could easily go up to £1,500 per square foot by 2013

Cushman & Wakefield predicts that Bond Street rents could easily go up to £1,500 per square foot by 2013.

“Records are meant to be broken, aren’t they?” says Duncan Gilliard, senior surveyor in the central London retail team at Cushman & Wakefield.

“The exclusivity a brand enjoys to be based on Bond street is why rents might break the £1,000 barrier as soon as next year. The street’s a must-visit for international tourists with big wallets, which is why it’s at the heart of the expansion plans for big luxury brands.”

This month, for example, British luxury brand Belstaff announced plans to move to Bond Street at a rental rate of £3m over 20 years. In December 2009, jeweller Piaget spent £965 per square foot to sell its stones from Bond Street.

Mount Street: the next best thing

This up-and-coming Mayfair elite street is definitely giving Bond Street a run for its money.

Owned by the Grosvenor Estate, the property company controlled by the Duke of Westminster, Mount Street boasts the most sought-after fashion and lifestyle brands.

And that’s not to mention the gourmet offerings of Mount St Deli and the high-end seafood restaurant Scotts. Or the colourful Mount Street gallery spaces.

Mount Street has been a silent backwater for many years compared to retail meccas like Oxford Street or Bond Street. But with its host of glossy new residents, it might just be on its way to stealing Bond Street’s crown.

“This is where multi-millionaires pop by in their chauffeur-driven cars, spend a fortune in the fashionable boutiques and then wine and dine in the best restaurants on the street.”

A testimony to the exclusivity of Mount Street is the fact that Grosvenor Estates makes brands pass a rigorous assessment to be based there. The brands are evaluated on everything from shop design to the pavement widths. Popular luxury brands such as The Kooples and Fabergé didn’t pass the test and were denied admission to this elite street.

“Grosvenor has been able to create a certain magnetism to the area by picking and choosing brands that can be based out of Mount Street,” says Wetherell. “The bar is very high which gives shoppers a very eclectic mix of things to spend their money on.”

Grosvenor has plans for strengthening retail flagship stores on Mount Street over the next year, which will add further credibility to the street’s existing boutiques and stores.

“Grosvenor’s recent focus has been on the further transformation of Mount Street as a desirable destination,” says Helen Franks, retail director for Grosvenor Estates. “This has included the redevelopment of the public realm space in July 2011, and the erection of an outstanding water feature ‘Silence’, by Japanese architect Tadao Ando, opposite The Connaught Hotel.”

How the French made Mayfair property très cher 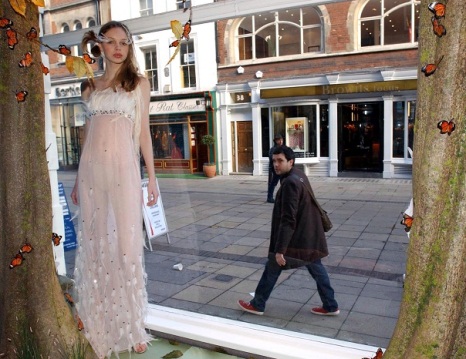 Back in September, we told you that 69 per cent of Bond Street property is now foreign-owned, and that the French own 13.6 per cent of the strip. French lifestyle brands can’t get enough of London.

And Mayfair’s South Molton Street and Westbourne Grove are where the French retailers have made their presence felt the most. The streetscape is the answer to Le Marais, one of the hippest shopping districts in Paris.

“French clothing chain Sandro is rumoured to have paid £800,000 as premium for 6 Marylebon
e High Street, such is the scale of the rents that the French will pay to be based in the exclusive streets of London,” says Cushman & Wakefield’s Gilliard.

“Their commitment to the London retail market has been cemented by their acquisition of stores alongside opening of concessions and ecommerce stores. In addition, their wide-ranging and prominent advertising campaigns such as ‘The Kooples couples’ appearing on numerous black taxis and London buses has increased their visibility,” he adds.

French brands typically snap up between 1,000 – 1,500 square foot in prime locations, often paying eye-watering premiums. South Molton Street and Westbourne Grove have both seen rents rise by 25 per cent over the last year.

One of the principal reasons for the price increase is demand from French retailers, coupled with the limited supply of available properties.

Gilliard explains: “Coming to London is a natural progression for French brands as the capital gives them the opportunity to sell their stuff to the countless nationalities and tourists. Also, as the French retailers can easily hop on the Eurostar to London and go back to Paris in a jiffy, it makes London the ideal place to plan global expansions.”

Mayfair’s hedge-funds: squeezed out of the property market?

The hegemony of hedge funds in Mayfair has lasted more than 20 years. Having an address in Mayfair means quite a bit to hedge-fund owners: it’s a status symbol that shows you have the money to pay some of the world’s most expensive rents.

But the economic downturn saw many big-name funds leaving Mayfair’s side in search of lower rents. Established names in the business like Brevan Howard and DE Shaw moved out the area for cheaper Baker Street.

“It’s not just cheap rents that prompted the exodus,” says Mat Oakley, head of commercial research team, Savills. “We saw a lot of hedge-fund companies getting lured to Geneva for less-stringent taxation and regulation.”

But it seems like the retail rates paid by superbrands aren’t affecting the industry too badly. The average rent to let office spaces in Mayfair is between £100 and £110 per square foot, and companies who want to be located in Mayfair often won’t bat an eyelid at that.

In a column for LondonlovesBusiness.com, Anthony Lorenz, founder of Lorenz Consultancy, writes: “The  majority of corporate occupiers’ total expenditure on rent, rates and service charges only amounts to between 10 – 12 per cent of their total outgoings. They are not that worried if there is a 10 – 20 per cent rise in rental values – they will pay what they have to.”

Property pundits might hail hedge-fund owners’ relationship with Mayfair, but with the Shard and other skyscrapers coming up on London’s skyline within the next few years will Mayfair loose its edge?

“Absolutely not, I don’t think the hedge fund owners would ditch Mayfair for the skyscrapers,” says Wetherell.

“Hedge funds have always been and will always be an intrinsic part of Mayfair. The sector is aware that being based out of Mayfair is extremely profitable and will deliver nothing but positive returns,” he adds.

Mayfair’s retail realm is going from strength to the strength. The hedge-fund industry still calls it home, and of course it’s got the Ferraris and Porsches wheeling in all day. Shouldn’t it make a comeback on the Monopoly board too?

Leave your comments below and let us know what you think.