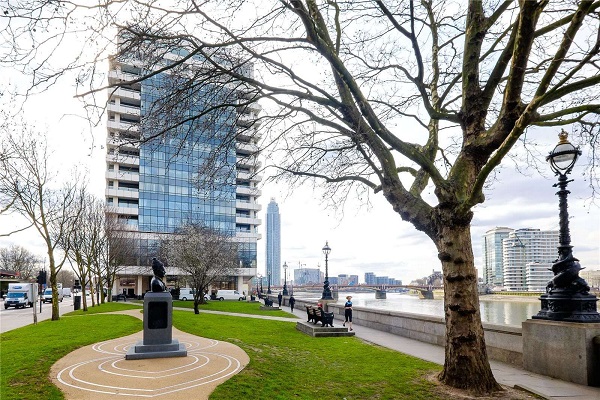 An outstanding 3,923 sqft (364.95 sqm) five bedroom lateral apartment, with four private balconies, occupying the entire sixth floor of Peninsula Heights on London’s Albert Embankment, offers panoramic views of the Houses of Parliament and the River Thames, also enjoyed by Lord Archer and other notable residents who have helped to make the building famous for its outstanding Whitehall views, film shoots and VIP events. One of London’s most exclusive and famous Thameside addresses, Peninsula Heights is an iconic glass and white pannelled fifteen storey apartment building, built in 1962-64 by Oscar Garry & Partners Architects and originally known as Alembic House, providing offices for the United Nations and later M16. In 1995-96 it was converted to provide luxury full-floor residences and renamed Peninsula Heights. Rising to almost 50 metres (165 ft) in height, the building and its apartments appear to float over the River Thames and the windows and balconies offer some of the finest views of the Thames and Houses of Parliament. Diana Rigg, Wife of James Bond, in On Her Majesty’s Secret Service Peninsula Heights has appeared in numerous movies including The Naked Runner, Joanna, The Italian Job, A Touch of Class, Theatre of Blood and James Bond’s The World Is Not Enough and Spectre. The oval shaped entrance hall leads into the interconnecting reception room and dining room which both overlook the River Thames and open onto private balconies/terraces. Both reception rooms are dual aspect with full height windows offering panoramic views over the Thames and Parliament. With full height windows the spacious family kitchen and breakfast room also located off the entrance hall. Offering panoramic views down the River Thames and over the Houses of Parliament the principal bedroom suite has a walk-in dressing room and main bathroom. There are four further guest bedroom suites, two with private balconies and three with ensuite bathrooms. Gary Hersham, Founding Director of Beauchamp Estates said, “This magnificent sixth floor apartment at Peninsula Heights offers outstanding Thames and Parliament views which have captivated residents and visitors alike including Lord Archer, John Barry, Margaret Thatcher, Frank Sinatra, Diana Rigg and Diana Dors. There are other residential buildings along Albert Embankment but Peninsula Heights is the only one directly on the River, all the others are set back off the road, so the views from the windows and balconies are exceptional and unrivalled.” Jeremy Gee, Managing Director of Beauchamp Estates added,  “Priced at just £1,145 per sqft, yet right by the River Thames and close to the heart of London’s Whitehall, this stunning Thameside apartment provides excellent value-for-money compared to adjacent locations such as Mayfair or Belgravia where a similar apartment would cost £3,000 to £5,500 per sqft.”