Mortgage rates in the UK have risen significantly during 2022, which appears to have proven an issue for homeowners hoping to switch mortgage deals.

A survey by Uswitch.com has found that rising interest rates pose the biggest obstacle for homeowners looking to switch, despite being up-to-date with their payments.

As part of their mortgage statistics report, the experts at Uswitch.com investigated which industry’s employees are most likely to be unable to switch mortgage deals, despite being up-to-date with payments. 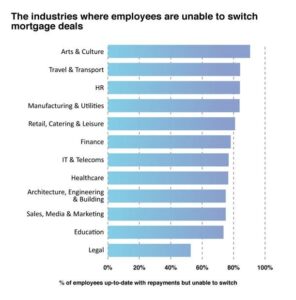 Arts & culture employees are most unlikely to be able to switch

Those employed in arts & culture are most likely to be unable to switch mortgage deals, with 90.48% falling into this category. 73.68% of these can’t switch as their current deal hasn’t ended, which could mean rising repayments for the 23.81% of employees not on a fixed-rate deal. Among employees in arts & culture unable to switch, 21.05% cited rising interest rates as the biggest obstacle, and 15.97% reported it was due to a change in income.

Travel & transport employees are second, with 8 in 10 (84.13%) unable to switch mortgage deals. More than three quarters (77.36%) are locked into their current deal, and 22.22% may see increases in monthly repayments, due to being on a variable-rate mortgage. However, unlike the arts & culture industry, the inability to switch mortgage deals is more likely to be due to a change in income (7.55%) than rising interest rates (5.66%).

Change to income is a large factor preventing homeowners from remortgaging

HR employees will face this most often, with almost a quarter (23.81%) being unable to change deals. Homeowners working in arts & culture may also face these issues, with wages preventing  15.79% of them from remortgaging. On average, 14.07% of homeowners earning less than £15,000 are more likely to be affected by a change in income, while only 5.84% of those earning more than £55,000 share this issue.

Claire Flynn, mortgage expert at Uswitch.com said, “If you’re nearing the end of your current mortgage deal, it might be worth looking at remortgaging options. If you’re on a variable-rate at the moment, switching to a fixed-rate deal means your repayments will remain the same for the duration of the deal and won’t be affected by interest rate changes.

“However, it’s important to bear in mind how remortgaging could affect your current plan. Leaving your plan early could result in early repayment charges (ERCs) that cost more than the potential savings from switching.

“Mortgage deals in the UK are often valid for six months, so if you’re within six months of your deal ending, you can lock in a new rate now and switch when your current deal comes to an end, avoiding an ERC. If you’re in this position, speak to a mortgage broker as soon as you can to find out what options are available to you.”