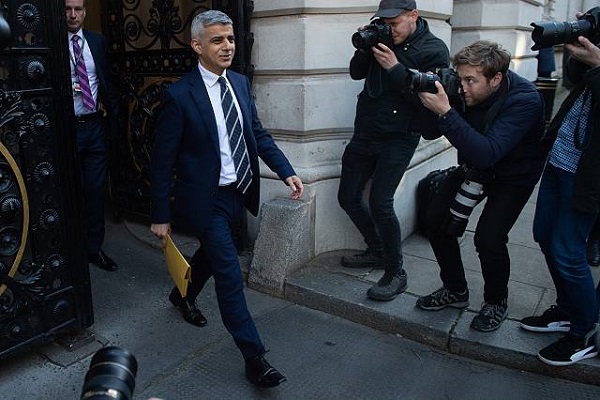 The Mayor of London, Sadiq Khan, has today published a consultation document on Budget proposals for the Greater London Authority Group and warned that the Government is forcing another era of austerity on London. Ministers are also pushing for him to implement a larger increase in Council Tax than currently planned.

Today, the Mayor has confirmed that from April he will increase his share of council tax that goes to non-policing services for the ‘average’ Band D household by £1.59 a year (3p a week) – the equivalent of just under two per cent, with the additional income generated as a result of increasing the Band D charge being allocated to the London Fire Brigade.

However, Sadiq has warned Londoners that the Government expect him to come forward with a significant increase in his share of council tax that goes towards policing and that they also want him to increase council tax to help fund Transport for London (TfL). On top of this, the Government is permitting local councils to raise their separate council tax precept by five per cent, which will lead to an average rise of £60 at Band D if cash-strapped councils take advantage of this flexibility.

The Mayor will publish his full council tax proposals early in the new year, following the Government releasing the draft policing and local government settlements, and has vowed to be honest and upfront with Londoners about exactly what this means for their bills as soon as possible.

The Mayor has also highlighted that Ministers have refused to fully refund the GLA Group for the money it has spent tackling the pandemic or for the income lost as a result. The uncertainty caused by Government having yet to publish the provisional local government and police settlements is causing further difficulty as the Mayor will not know how much council tax and business rates income we will receive until the end of January, with the huge economic impact of Covid-19 making this harder to predict than ever.

Sadiq is doing everything in his power to mitigate the impact of Government cuts, protect frontline services and reprioritise his budget on recovery. The Mayor’s draft Budget for 2021-22 focusses its attention on London’s recovery from the pandemic, despite significantly limited resources. It commits to tackling record unemployment by creating more, better-paid jobs, rebuilding a greener, cleaner and safer city, strengthening the safety net for the most vulnerable Londoners and emerging with stronger and more cohesive communities.

However, the scale of the financial challenge is staggering. Earlier this year, the Mayor revealed that GLA Group – which includes Transport for London, the Metropolitan Police and the London Fire Brigade – would be asked to make an expected £493m of savings overall, over the current and next financial years, as a result of this new era of Government austerity and the unprecedented loss of business rates and council tax income, caused by Covid-19.

The Mayor’s draft Budget sets out how the GLA Group will need to make £325m of these savings in 2021-22 based on the current ‘reasonable worst-case’ estimate of seven per cent losses in council tax revenues and reductions of 11 per cent in business rates income. TfL faces the largest saving, having to find £211.9m and continues to work with the Mayor and the Government on its longer-term funding needs, as well as continuing to identify further ways in which it can reach a financially sustainable position as soon as possible.

Khan’s top priority remains Londoners’ safety. That’s why the proportionately lowest proposed reductions in funding are for the Mayor’s Office for Policing and Crime, including the Metropolitan Police Service, and the London Fire Brigade.

The Mayor is extremely concerned about the impact of Government cuts on policing and last week announced that he is providing additional funding from City Hall to protect frontline policing and help plug some of the financial gap caused by Covid-19.

There are now more than 1,000 additional police officers than would normally have been afforded on the streets of London and Sadiq has invested more than £70 million to create more opportunities for young Londoners.

The Mayor has fully protected police officer numbers this financial year after taking a decision to use both GLA reserves and reserves held by the Mayor’s Office for Policing and Crime. However, there remains a funding gap for the following year and further savings for 2021-22 will be addressed as part of the ongoing budget process.

Khan said, “I firmly believe it is possible for London to be a better place to live after the pandemic than it was before. Unfortunately, we enter this crucial period of rebuilding with one hand tied behind our back by the Government who are forcing a new era of austerity on the capital at the worst possible time.

“I am particularly concerned about the impact of Government cuts on policing and crime. Ministers slashed funding for the police and youth services in 2010 after the last economic downturn and we’ve been dealing with the consequences ever since – including a wave of violent crime across the UK. We simply cannot afford the Government to make the same mistake again and I am using prudently-established reserves to help protect the Met from the worst effects of Government austerity.

“I must sound a warning for Londoners that instead of providing the funding we need, Ministers are pushing for an extraordinary and significant increase in Council Tax in London and across the UK.

“I will be honest and upfront with Londoners about exactly what this means for your bills as soon as possible.”

The Mayor has already confirmed that his GLA budget could potentially face £38m of savings due to the impact of Covid-19 and the lack of Government support – and that it will be concentrating funding on the city’s recovery from the pandemic. A proportionately lower savings target has been set for the London Assembly.

In 2015, the Government decided to abolish the TfL operating grant and massively increase TfL’s reliance on fares income. Despite reducing TfL’s like-for-like costs every year until Covid-19 hit and increasing the amount it held in reserves, the pandemic exposed how this 2015 model was fundamentally flawed. Sadiq has agreed with the Government that we need a new approach that delivers financial sustainability for TfL, which must be based on a genuine understanding of future demand for public transport and fiscal devolution to London. Until this can be implemented, further support will be required from the Government as reflected in this budget.

London Fire Brigade has a total budget gap for the 2021/22 financial year of £26.3m, including £15m that is from a forecast loss of business rates and council tax income to the Mayor. LFB are balancing their budget through savings proposals, including a recruitment freeze and the use of reserves.

Sadiq has already personally taking a ten per cent pay cut and taken the difficult decision to relocate City Hall from its expensive rented offices to a new permanent home owned by the GLA at the Crystal in the Royal Docks – saving the GLA Group £61 million over the next five years and helping the regeneration of a key part of the city.