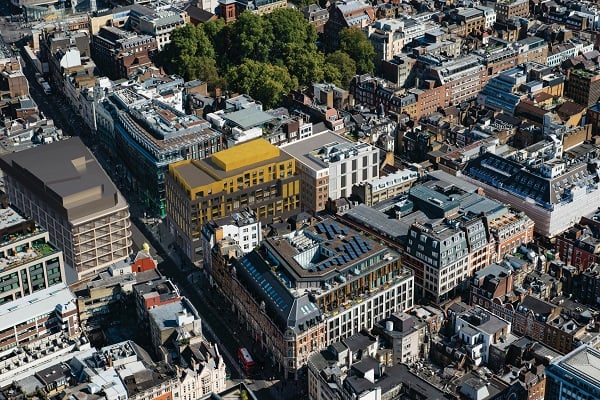 TCRW, an acronym for Tottenham Court Road West, is located on a landmark 0.54-acre development site comprising two new buildings bordered by Oxford Street to the north, Great Chapel Street to the West, Dean Street to the East and Diadem Court to the south. The masterplan for TCRW was designed by multi-award-winning architectural practice Hawkins\Brown with specification and interior design by Argent Design. TCRW will provide two architecturally contrasting apartment buildings, both with private reception foyers with passenger lifts, accessed from Fareham Street, the boulevard which separates them. Overlooking Oxford Street the first apartment building is a striking six storey Art Deco landmark, inspired by Lutyen’s 1938 Pantheon building further along Oxford Street, with a glass and polished black reconstituted stone façade with gold decorative paneling. The ornamental gold panels are based on the etched windows of the Victoria-era Bath House Tavern that once stood on Fareham Street. The Georgian inspired building will provide 23 one, two and three bedroom apartments and 1,950 sqft of new retail accommodation and kiosks fronting onto Dean Street and Great Chapel Street. The ground floor retail units and Crossrail interchange will have ceiling heights of up to 28.5 ft (8.7m), providing the apartments on the upper floors of both buildings with the benefit of being in their own separate oasis, highly elevated above street level. The majority of apartments in the Art Deco building and all in the Georgian inspired building will feature private exterior space ranging from winter garden style covered balconies to extensive sun terraces for the larger apartments and penthouses. Each apartment will be highly specified and finished, designed to provide state-of-the-art 21st century living in the heart of London’s West End. The design concept and specification for TCRW has been devised by internationally acclaimed interior designer Nicola Fontanella of Argent Design who has created some of the world’s most exclusive homes in London, Miami, Monaco and New York for clients including A-listers Madonna, Guy Ritchie and Naomi Campbell. Other finishing touches will include Geberit AquaClean remote control bathroom technology, hotel style integrated master switch to turn off TV and lighting on leaving, and the ability to turn on pre-set ‘scene level’ lighting on arrival. The apartments will have optimal WiFi connection, ultra-fast fibre broadband enabled and pre-installed, cabling for Sky Q satellite and terrestrial TV, programmable mood lighting to all principal living areas and bedrooms; and recessed electrical curtain tracks to all windows. Set to become operational between Q1 2020 and Q4 2021, the new Crossrail Interchange at Tottenham Court Road will be one of London’s busiest stations. Dean Street will give access to a new ticket hall and underground station with Turner Prize winning artists featuring inside the station including gold-leaf artwork by Richard Wright and digital artwork by Douglas Gordon. The interchange will offer access to the Elizabeth Line and the Northern and Central underground lines. The Elizabeth Line will have capacity for up to 24 high speed trains per hour, serving up to 170,000 passengers daily, with Tottenham Court Road providing high speed journeys to Heathrow Airport (28 minutes), Canary Wharf (12 minutes), Bond Street (2 minutes), City of London/Liverpool Street (5 minutes) and Stratford (14 minutes).