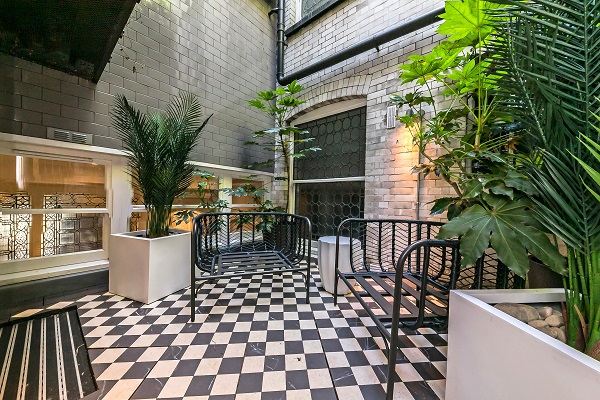 It is arguably the finest letting opportunity in Covent Garden, a grand 1,818 sq ft first floor apartment which was formerly the main private dining room and servery of the Adelphi Theatre Restaurant Building, a fine-dining haunt frequented by Oscar Wilde, Sarah Bernhardt, J. Bruce Ismay and Noel Coward, now known as Gatti House, located on London’s famous Strand, with the apartment benefitting from a 227 sq ft terrace and 80 sq ft of ornamental balconies: available to let via DEXTERS. The Adelphi Theatre Restaurant was owned by brothers Agostino (1842-1897) and Stefano Gatti (1845-1906), a wealthy Italian-Swiss dynasty who, like a Victorian era version of Sir Cameron Mackintosh/Richard Caring, owned a portfolio of London Theatres and restaurants, including the Adelphi (purchased in 1880) and the Vaudeville (purchased in 1892). Located adjacent to the Adelphi Theatre, the restaurant at 410 Strand was “The Ivy of its day” with the main restaurant on the ground floor, opulent private dining rooms on the first and second floors and catering facilities on the upper floors. The Adelphi Theatre and restaurant was sold by Jack Gatti (one of the next generation of the family) in 1955 and the restaurant building was converted in 2010-2013 into Gatti House, a boutique scheme of ultra-luxury apartments, with the former restaurant’s beautiful interiors restored and skilfully converted into residential living spaces. When the main reception room served as a VIP dining room it was managed by Agostino’s eldest son John Gatti (1872-1926) whilst a cousin, Gaspare “Luigi” Gatti (1875-1912), served as the manager and head chef for private dining. In 1908 J. Bruce Ismay, a frequent user of the first floor dining room and Chairman of the White Star Line, gave the Gatti family the contract to operate the à la carte restaurants on his new ocean liners the RMS Olympic and RMS Titanic. Ismay liked the Covent Garden first floor room so much that he commissioned Thomas Andrews to create a larger replica for the à la carte first class dining room of RMS Titanic, alongside copying the menu and table place settings. On 10th April 1912 Gaspare Gatti and 35 of his staff, most previous employees of the Adelphi Theatre Restaurant, sailed on the maiden voyage of RMS Titanic. On the 15 April 1912 RMS Titanic sank, taking with it Gaspare Gatti and most of his staff – part of the worst disaster in maritime history. Fast forward to the current day and the celebrity diners and RMS Titanic history are long gone, replaced by a beautiful, totally unique, bespoke design luxury apartment with beautiful elaborate interiors with ornate plasterwork, walls and joinery and carved door cases, some with feature cat’s heads (Gatti = cats in Italian). With ceilings up to four metres high, the apartment’s main reception has a feature fireplace, ornate plasterwork and three full height glass double-doors, opening onto a trio of ornamental balconies. Once the original Victorian servery, the separate designer Kitchen/breakfast room has a central island with a four seat breakfast bar, ornate plasterwork and diamond pattern marble flooring. There are two luxurious bedroom suites, both with ensuite facilities, and a 202 sq ft outside terrace. DEXTERS has 12 offices in Prime Central London, providing a greater presence in the heart of the capital than any other estate agency. Specialists in period houses, the DEXTERS portfolio of properties in Prime Central London encompasses grand houses, townhouses and mews cottages, as well as stylish apartments and magnificent penthouses in the capital’s best addresses, many with an interesting history or famous past residents just like Gatti House. Lazarus Demetriou, Director at DEXTERS (Fitzrovia) said, “With its grand interiors, celebrity history and RMS Titanic links this magnificent first floor apartment in Gatti House is the most luxurious residential letting on the Strand and arguably the best letting opportunity in Covent Garden. With its balance of outside space, in the form of the terrace and ornamental balcony, and the large voluminous interiors, this is the perfect central London apartment for a discerning resident wanting an abundance of private space to live, entertain and relax.” On London’s famous Strand, close to Trafalgar Square and the River Thames, Gatti House provides easy access to Covent Garden, Whitehall, the West End and the City of London. The vicinity in and around the Strand is home to some of London’s best 5-star hotels including The Savoy, ME London Hotel, The Corinthia and the Waldorf Hilton. Restaurants in the locality include STK, The Ivy and J Sheekey. From the Strand it is just a short stroll or jog to the River Thames embankment, St James’s Park and Green Park, and the address provides easy access to nearby Mayfair, Knightsbridge and Belgravia.

The Gatti House apartment is available to let for £3,500 per week. For further information please contact DEXTERS (Fitzrova) on Tel: 020 7067 2402 or visit www.dexters.co.uk.