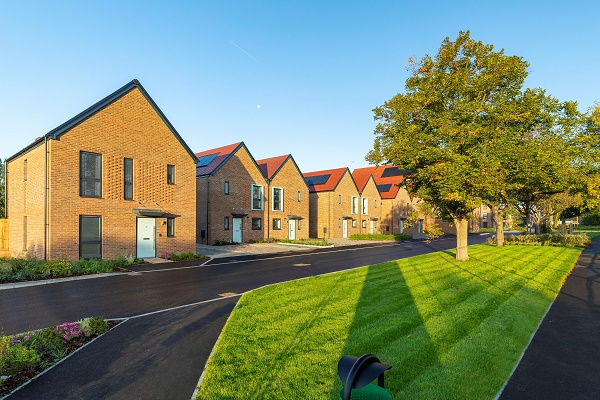 The first people have moved into a landmark housing development on the site of the former St George’s Hospital in Hornchurch.

Bellway Thames Gateway has welcomed the first residents to St George’s Park, a development of 356 new homes off Suttons Lane.

The first phase of the development will comprise 194 new homes, including 44 affordable properties for rent or shared ownership, and will feature a range of one and two-bedroom apartments and two, three, four and five-bedroom houses, the first of which are now occupied.

The 29-acre site, which had been derelict since the hospital closed in 2012, was purchased from the NHS by Bellway in March 2018 for in excess of £40 million, the single biggest land sale in NHS history at the time.

The hospital’s central admin block is being retained and converted into homes as part of the development, while the ward blocks are being rebuilt in the same style as the original to maintain the appearance of the site.

With the first residents now in their new homes, Bellway is continuing work on the first phase of construction at the development, with the next phase of homes now released for sale to the public.

Emma Hamlett, Sales Director for Bellway London, said: “The arrival of the first residents at St George’s Park represents a key milestone in this landmark development for Hornchurch.

“St George’s Park will deliver much-needed new housing, large areas of public open space and major investment in local schools. Seven new play areas will be located around the site, including Suttons Green, which will be the central public open space once the development is completed.

“At the same time as regenerating this derelict brownfield site, we are paying homage to its rich heritage, in particularly its strong connections to RAF Hornchurch, by maintaining some of the existing hospital buildings, one of which is to be converted into a museum about the former airfield.”

St George’s Park also celebrates the history of the neighbouring former RAF Hornchurch, since converted into Hornchurch Country Park, which played a key role in defending London and the South East from German bombings in both the First and Second World Wars.

The hospital was used as accommodation for airmen based at RAF Hornchurch during the Second World War and street names at the development such as Spitfire Approach, Aerodrome Close and Gliders Drive pay homage to this connection.

Meanwhile, Bellway has donated Suttons House, a former hospital building on the site, to the Hornchurch Aerodrome Historical Trust, which plans to convert it into a museum commemorating the former airfield’s history.

As part of the planning agreement for the development, Bellway is providing funding of £1.5 million for local schools and £150,000 towards Hornchurch Country Park.