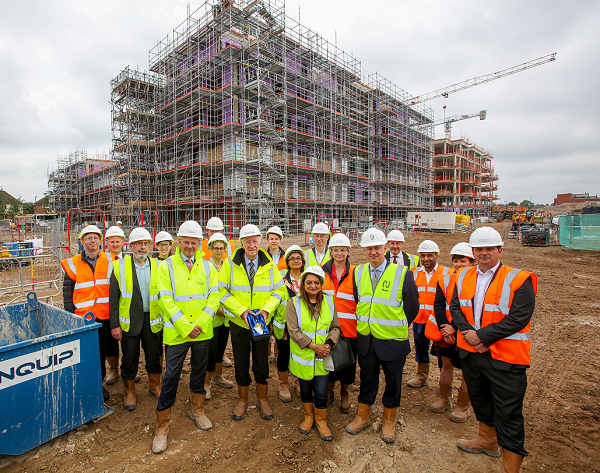 On Wednesday 19 June, special guests including the Deputy Leader of Harrow Council joined Barratt London and the Hyde Group in celebrating the ceremonial topping out of the Rockeby Apartments at Eastman Village, a joint venture development being delivered by Barratt London and Hyde. Together, they celebrated a major milestone in the regeneration of the 55-acre Kodak industrial site, which will be reborn as a thriving London community.

Councillor Keith Ferry, Deputy Leader of Harrow Council, and Cllr Parmar, Ward Councillor for Marlborough, each laid a brick on the third-floor of the Rockeby Apartment block, a collection of 1-, 2-, and 3-bedroom homes, which will be available to move into in late 2019. Matt Calladine, Regional Land and Development Director of Barratt London and Guy Slocombe, Group Business Development Director for Hyde, were also on hand to present Councillor Ferry with a ceremonial trowel to mark the occasion.

The landmark site in Harrow is an impressive residential development, which will eventually provide more than 1,000 new homes in addition to offices, retail space and extensive parkland and communal areas. 40% of the homes will be classed as affordable.

Once complete, Eastman Village will consist of five residential blocks, surrounding internal courtyard gardens, using predominantly red bricks as a gesture toward the original Kodak buildings. The iconic factory chimney, which is considered a local landmark, will continue to stand proudly at the site, framed by a revolutionary energy centre that will provide ongoing eco-friendly energy to the homes.

Matt Calladine, Regional Land and Development Director, Barratt London said, “Our priority for Eastman Village is for the development to honour the historic relationship between the local community and the Kodak Factory, which at its height in the 1950s employed 6,000 people. The development will be providing homes, jobs and a 620 sqm community space that will help to turn Eastman Village into a thriving new urban neighbourhood.”

Guy Slocombe, Group Business Development Director for Hyde said, It was great to welcome councillors to this landmark development in Harrow. This is an important area for us and we are keen to build on the success of the Harrow Square development just up the road. It is partnerships like this with Barratt London that will help us see the end of the housing crisis sooner and allows us to quickly build the homes that London so desperately needs.”

Current prices start at £335,000 for a 1-bedroom apartment, featuring an open plan living, dining and kitchen area that opens out onto a private balcony.