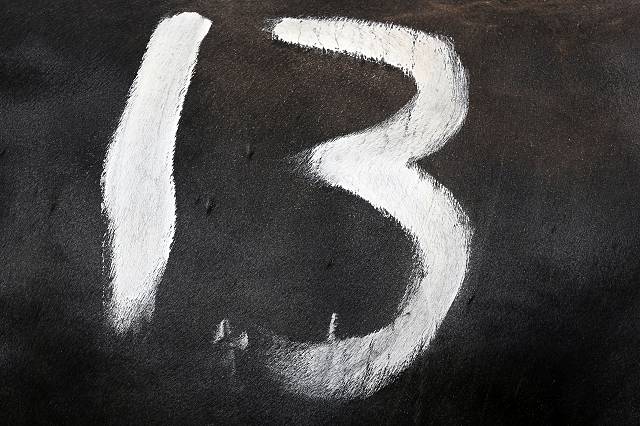 With Halloween fast approaching, superstitions will be at an all-time high and one such superstition is the feelings surrounding the number 13.

With 13 supposedly an unlucky number, having a property tarnished with it has long been a reason for lower asking prices and has even seen some big housebuilders remove it completely from their new build developments.

But how unlucky is it for homeowners and is the tide starting to turn? New homes specialists Stone Real Estate have sifted through the Land Registry records to find out.

Since 2016, transactions involving the number 13 have accounted for just 0.8% of new build sales and just 1.1% of existing property sales.

Despite this low volume of transactions, the impact on price is notable, with existing number 13 properties selling for an average of -£22,006 less than other properties sold during the same time period, a reduction of -8%.

While new build homes have done a better job of overcoming the stigma, the average sold price since 2016 for number 13 new builds is still -2% lower than new build homes with other numbers.

This is also the case when looking at the last 12 months, with existing stock numbered 13 also selling for -8% (-£22,468) less, although the tide does seem to be turning in the new build sector, with a decline of just -0.4% for number 13 new builds compared to those with other numbers.

When looking at 2019 alone, new build homes with the number 13 have actually sold for 0.2% more on average than those with different numbers, although it’s yet more bad news for those with an existing build so far this year, with number 13 properties again selling for -8% less – wiping £21,908 off their property’s value.

Founder and CEO of Stone Real Estate, Michael Stone said, “In this day and age, it’s quite remarkable how ancient superstitions can still have such a detrimental impact on the price a property will sell for. For many, the aspiration to own their home will no doubt rise above any such feelings around the number 13 and the figures show that as a first-time buyer, it’s probably the ideal number due to the lower cost of getting on the ladder.

“However, there are signs that this tide is starting to turn within the new build sector at least, and so far this year, the number 13 seems to be in vogue with slightly higher sold prices. Could this be the next property trend that sees new build buyers go against the grain?”