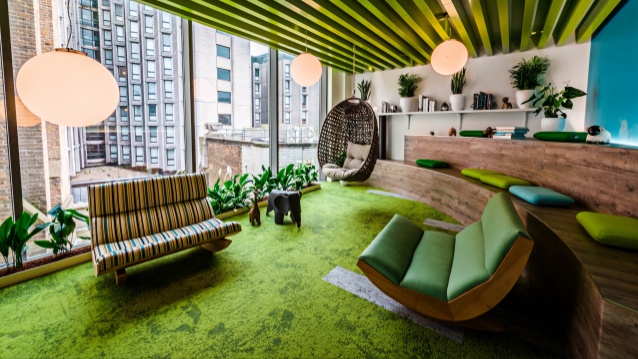 Looks are never everything, but when it comes to the office you spend most of your time in, a work environment that is fun, easy on the eye and inspiring can make a huge difference to how you perform on a daily basis. UK employees expect far more than just free tea and coffee, they want a space which is going to motivate them to achieve their very best.

Here are eleven UK offices from Glassdoor you need to know about in 2018:

The Office: Music is the heartbeat of the brand in this Camden-based office.

As well as a massive amp wall in reception there are meeting rooms themed around music genres such as Punk, Reggae and Indie. There are several social spaces which include a stage area with a drum kit, video wall and bleacher seating mixed with more intimate spaces such as the recording rooms with full on sound protection and ‘on air’ signs. More practical elements include coffee machines which deliver milkshakes, a creative lab and well-being rooms.

The Office: Eighteen months in the making, this new office was designed to embody what the company strives to helps its customers achieve every day: attract, engage and retain employees. Staff are free to choose where they sit rather than be assigned desks, there are gender-neutral bathroom facilities accessorised by Danish company Vipp with products from Aesop and ghd, plus a Tracey Emin installation called ‘Be Brave’ can be found in the Cafe.

The Office: CEO Stephen Fitzpatrick’s mission was to turn the central Bristol office into a ‘living jungle’, and we think he’s succeeded. They have six trees in the main area ranging from 2.5m to a huge 8.0m, 500 balcony plants, plus 100 standing plants. Obviously they’ve a really cool treehouse you can have meetings in too!

The Office: These Shoreditch offices are housed in renovated loft building, giving the space a modern, open-concept paired with rustic touches, such as exposed brick and wood. Plus, it’s got recreation space with a pool table and other retro games.

The Office: ASOS’ headquarters in Camden are located in a former tobacco factory, with an art deco vibe that means natural light, modern furnishings, and funky, patterned wallpaper.

The Office: Circular, spinning seating pods—like something you might see on a futuristic spaceship—and translucent acrylic display screens make this London office techy and cool.

The Office: An agile workspace policy allows you to enjoy multiple areas of this extensive, multi-floored London space that goes heavy on windows and internal glass walls. Combine that with the mostly white color palette, and this office has the sleek feel of an Apple store.

The Office: This London office has a rotating fairground ride, a la an amusement park! Who wouldn’t want a spin—bad pun intended—at this office, which seems to value playing as much as it does hard work.

The Office: As soon as you enter reception you’ll be welcomed by a giant monkey and unlimited supply of sweets. In the breakout areas you’ll stumble across a pool table and fridges full of beer, wine and soft drinks. In the winter you may find Mexican wrestlers or circus acts roaming around as part of their Christmas season celebrations. To put it quite simply, this office personifies fun..and looks really cool too!

The Office: Experimentation is a core part of the Skyscanner culture with quirky workspaces, including ‘squad rooms’ and individual horizontal pods so that people can have dedicated spaces. Take a screen break with a subsidised wellness session (Tuesday night yoga) or blow off some steam with a game of table tennis, foosball or Xbox in the office.

The Office: This facilities management company is based in The Shard, one of the tallest buildings in Europe. The business now occupies the twelfth floor of this striking piece of architecture, and, with incredible panoramic 360 degree views across London’s skyline, you’d be pretty miffed if you didn’t get a window seat! Mitie moved into these state of the art offices last year, bringing 250 employees from three separate locations together under one roof.