Here’s what they said

Rents in the UK rose by an average of 1.1 per cent during July, new data from HomeLet reveals, a return to positive inflation following two successive months in which rents fell. The average rent agreed on a new tenancy signed during July was £925 according to the July HomeLet Rental Index, compared to £915 in the same month of 2016.

●    Rental price inflation has returned in the UK, rising by 1.1 per cent in July compared to the same month a year ago, the first increases seen for three months; the average monthly rent now stands at £925

July’s 1.1 per cent annual increase compares to declines of 0.3 per cent and 0.2 per cent in May and June respectively, the first time rents had fallen in the UK since 2009. Nevertheless, inflation in the private rental sector continues to lag the general rate of inflation, which was 2.7 per cent in June, the latest month for which official data is available.

The Greater London rental property market continues to act as a brake on the UK as a whole, with rental inflation in the capital now running at -0.6 per cent a year according to the July HomeLet Rental Index.

July was the fourth successive month in which London saw rents fall, and while the pace of decline is now slowing – July’s figure compares to a 2.9 per cent drop in June – the capital’s rental market still looks transformed compared to this time last year, when rents were rising at a rate of 6.6 per cent.

Outside of London, rental price inflation is significantly stronger, with nine out of 11 regions beyond the capital seeing higher rents last month. Rents rose fastest in Northern Ireland (up 5.7 per cent compared to July 2016) and Scotland (3.6 per cent), with only the South East (-0.9 per cent) and the North East (-1.7 per cent) recording declines.

As a result, rental price inflation across the UK but excluding London is now running at a much faster rate of 1.6 per cent. HomeLet’s regional data is available in more detail via an online interactive infographic.

HomeLet’s data suggests landlords now feel more confident than in the Spring about seeking higher rents on their properties – but also that they remain very aware of tenants’ ability to pay. The July data may also reflect a decrease in the number of homes coming onto the rental market, with research from organisations such as the Association of Residential Letting Agents suggesting fewer landlords have acquired new rental properties in recent months. A similar effect has been seen in the housing market, where weaker prices stabilised in July as fewer properties were put up for sale.

Commenting on the research, HomeLet’s Chief Executive Officer, Martin Totty said: “It’s often been the case in recent times that rents have strengthened over the summer period. It’s a time when renters contemplate moving, demand increases, tenancy terms are set, and when the anniversary of the tenancy often occurs. This year, that ‘seasonal’ factor brings some relief for landlords, who’ve endured a gradual erosion in rent prices over many months.

“At the same stage last year, the South East was the main driver of UK average rents. This time around it’s regions throughout the country leading the strengthening in rents. If we exclude the London region, the average UK rent for a private rental property has hit a new high of £769 a month, up 1.6 per cent on this time last year.”

Tottyadded: “Whether the market has now found some equilibrium remains to be seen, but landlords at least will be grateful for even some short respite. Predicting where the market heads from here is very difficult given the number of competing forces impacting the sector, either already being felt or still being contemplated.

“We know housing stock for sale is in short supply and the Bank of England has expressed concerns about the ‘credit overhang’ and lenders’ resilience should economic activity start to slow. At the very least, these factors should not be unhelpful to the rental sector in the immediate future, encouraging landlords to stick with property owning as an asset class, with potential still to provide relatively attractive returns compared with alternative investment choices.” 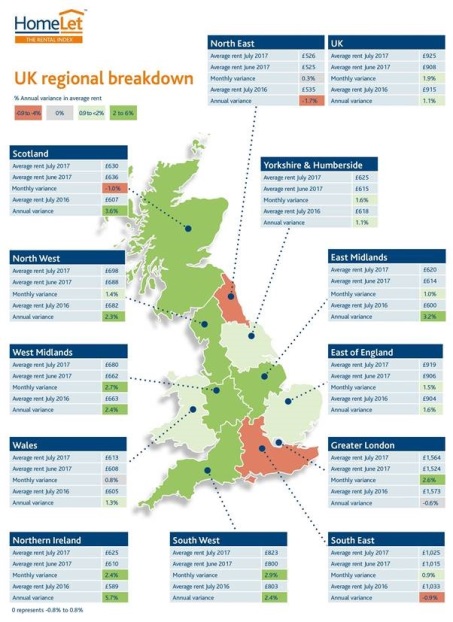 About our data: HomeLet Rental Index provides the most comprehensive and up to date data on newtenancies in the UK. As part of referencing prospective tenants each year, HomeLet processes informationincluding the rental amounts agreed, the number of tenants moving into the property, together with theemployment status, income and age of all tenants. The trends reported within the HomeLet Rental Index arebrand new tenancies which were arranged in the most recent period, giving the most relevant insight intochanges in the Private Rented Sector. This is in contrast to many other rental indices which are based on allproperties which are being managed, which may have had rental amounts agreed as long as two years ago.