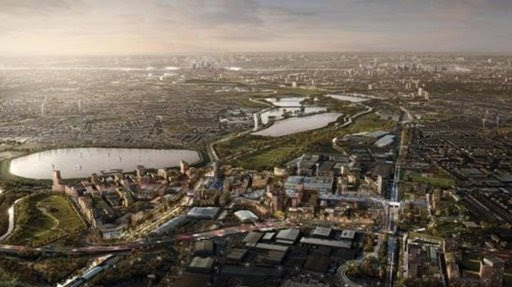 Construction of roads, bridges, cycle lanes, water, gas and communications to service the 10,000 homes set to be built at Meridian Water in Edmonton will start later this month.

Enfield council has entered a framework agreement with Vinci Taylor Woodrow, BamNuttall and VolkerFitzpatrick to deliver the £90m works.

Council leader Cllr Nesil Caliskan said: “Successfully delivering the infrastructure on the site will be a major step forward in what will be a transformational plan for the area, providing homes, jobs and parkland for the lasting benefit of our borough’s residents.”

The work is expected to generate 150 jobs supporting ten skilled apprenticeships with at least £4m of contracts going to local construction companies. So far, the council has won £170m in infrastructure funding from the government.

Vistry Partnerships is overseeing phase one of the project which includes 950 new homes of which half will be affordable. Work on the first 300 homes will start later this year with the first completions due in 2022.

The former Vehicle and Operator Services Agency building is already being converted to create workspace for thousands of freelance designers, artisans and small businesses.

The workshops will provide 30,000sq ft of workspace for up to 1,000 makers and creators across engineering, wood, metal, digital and additive technology plus a fashion studio.

A new station was built last year to service the 210-acre site next to the Ikea store and close to Lea Valley Park.

In January, the council struck a deal with Troubadour Theatres to build film and television studios at the development which are expected to open this spring. It’s hoped they will enhance Meridian Water’s ambitions to be a creative hub offering jobs and cultural activities.

Meridian Water has suffered a series of setbacks since the council unveiled the masterplan in 2013. Talks with master developer Barratt Homes collapsed in 2017 with the council claiming the firm’s plans offered a ‘poor deal’ for locals. After discussions with the reserve bidder, Pacific Century Premium Developments fell through the council decided to work with several smaller developers to deliver the scheme.